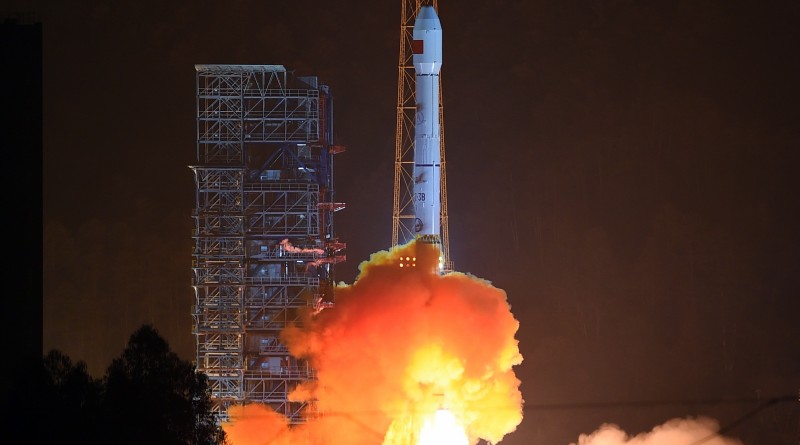 The Gaofen-4 satellite enjoyed an on-target orbital insertion on Monday in the final space launch of 2015, orbital data released later in the day shows. Starting out in a Geostationary Transfer Orbit, Gaofen-4 will quickly climb into Geostationary Orbit and begin delivering moderate-resolution imagery of China and surrounding territories at all times of day for a variety of purposes.

The Long March 3B rocket carrying Gaofen-4 lifted off from the Xichang Satellite Launch Center at 16:04 UTC on Monday, just after midnight local time on Tuesday. The 56-meter tall rocket began heading to the south-east, overflying the Chinese mainland, en-route to a trip across the Pacific Ocean. With a total thrust of 604-metric-ton-force, Long March 3B was powered by its four boosters for 140 seconds before they dropped away from the core stage which continued burning for another 18 seconds. The also-hypergolic-fueled second stage burned for nearly three minutes before handing off to the cryogenic third stage of the rocket.

The first burn of the two-engine third stage pushed the stack into a Low Earth Parking Orbit under 200 Kilometers in altitude for a coast phase of around 11 minutes to set up the proper location for the apogee-raising burn. Re-starting its engines, the third stage placed the stack into a standard Geostationary Transfer Orbit with an apogee at geostationary altitude above the equator. Spacecraft separation occurred around 26 minutes after liftoff, though confirmation of launch success was not available until some time after the satellite was placed in orbit.


The following orbital parameters were released for the Long March 3B upper stage and Gaofen-4 satellite:

The Gaofen-4 Satellite joins the China High-Resolution Earth Observation System CHEOS, a fleet of Earth observation satellites operated from different orbits and carrying a variety of sensors to gather relevant data products similar to the American Landsat and European Copernicus programs. Gaofen-4 stands out within the CHEOS program as it marks the first time China deploys a Remote Sensing satellite to Geostationary Orbit from where it can deliver around-the-clock imagery of areas in China and surrounding territories. The 4,600-Kilogram satellite makes use of a hexagonal platform with two two-panel solar arrays for power generation and a large optical baffle on its Earth-facing deck.

The Gaofen-4 satellite is outfitted with a staring imager hosting a common optical system focusing light on a visible and infrared detector system. The staring camera has to be pointed to the desired location on Earth and can capture frames around 400 x 400 Kilometers in size. A ground resolution of 50 meters is achieved in the visible wavelengths while the infrared imager reaches a resolution better than 400 meters – realizing a resolution better than current staring imagers deployed to Geostationary Orbit. Being sensitive for infrared wavelengths permits the satellite to complete nighttime imaging operations.

The primary driver of the Gaofen-4 mission is the acquisition of imagery at extremely high temporal resolution, essentially only limited by the time needed to slew the satellite between different targets and downlink data rates/latency. Multi-band imagery delivered by the spacecraft will be used in various applications including disaster monitoring, meteorological observations, environmental monitoring, agricultural planning and national security.