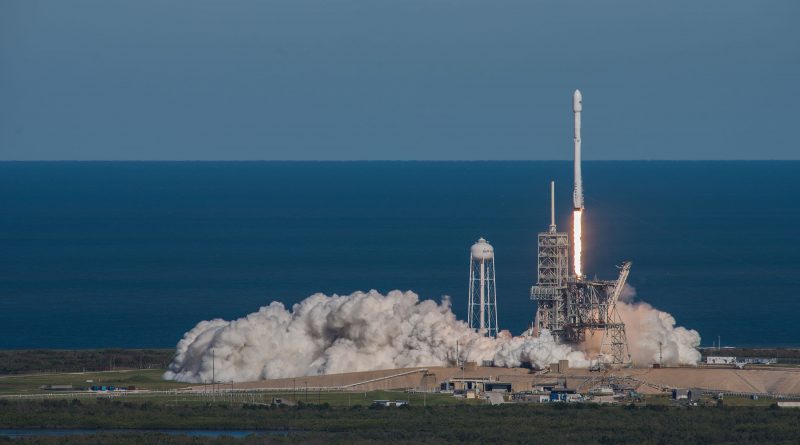 SpaceX carried out its third Falcon 9 launch of the month on Monday from Florida’s Kennedy Space Center to deploy the KoreaSat 5A multipurpose communications satellite into a high-energy transfer orbit for South Korean operator KT Sat. Lifting off from Launch Complex 39A in ideal weather, Falcon 9 was headed to the south-east, dropping its first stage toward a sea-based recovery and firing the second stage twice to deliver the 3,700-Kilogram payload into a highly elliptical target orbit.

Monday’s launch marked SpaceX’s 16th mission of the year as the company continues with a steady pace, in part enabled by more customers willing to fly on previously used first stages to work around a bottleneck in production capability at the company’s California manufacturing base. Also responsible for SpaceX’s success in 2017 was the former Saturn V and Space Shuttle launch complex that provided the company with a trouble-free launch pad as post-launch repairs could be reduced to a minimum, permitting a dozen launches over an eight-month period.

The KoreaSat 5A launch comes right on the heels of SES 11 that departed LC-39A at sunset on October 11 to mark SpaceX’s third successful booster re-use mission. In the days after, the two brand new stages for KoreaSat 5A, Booster #1042 and a Block 4 second stage, underwent assembly in the pad-side hangar before completing the standard Static Fire Test on Thursday to clear the way for a Monday liftoff.


Falcon 9 was wheeled back inside the hangar where KoreaSat 5A had arrived Thursday night, having completed production in Cannes, France followed by a trans-Atlantic trip and final processing at a SpaceX facility at the Cape. The integrated rocket rolled up the ramp again on Sunday and took its vertical launch position before sun-down in readiness for a lengthy countdown operation picking up Monday morning with the activation of the vehicle for checkouts.

With controllers on station in two Launch Control Rooms at the Cape and engineering support at SpaceX HQ in Hawthorne, Falcon 9 entered propellant loading at the T-70-minute mark after vehicle checks showed no problems and weather briefings were short as ideal conditions for a rocket launch were in place on Monday. Falcon 9 entered tanking with loading some 155 metric tons of Rocket Propellant 1 – Kerosene fuel chilled to -7°C to increase its density.


Liquid Oxygen loading picked up at T-35 minutes on the first stage and 15 minutes later on the second stage to pump around 360 metric tons of the sub-cooled oxidizer into the vehicle, aiming to achieve flight levels just two minutes before launch to prevent propellant from warming excessively in a bid to squeeze the maximum possible performance out of the Falcon 9 design. Pushing into the final seven countdown minutes, Falcon 9 began chilling down its nine Merlin 1D engines, aligned its flight control system, switched to battery power and pressurized its tanks for the retraction of the Strongback Structure, primed for a rapid kickback at the moment of liftoff.

Flight levels on both stages were called out at T-2 minutes and Helium loading closed out even closer to liftoff with Falcon 9 taking over control at the one-minute mark for final pressurization and arming. A final GO was voiced by the Launch Director and the stage was set for liftoff after what appeared to be a routine countdown for the most-flown launch vehicle of 2017.

The typical green flames of Falcon 9’s igniter mixture emerged from the business end of the vehicle at T-3 seconds as the rocket’s nine engines soared to a launch thrust just shy of 700 metric-ton-force. Hold-down mechanisms let go of the 70-meter tall rocket after all engines were verified to be up and running, marking a window-opening liftoff at precisely 19:34:00 UTC, 3:34 p.m. local time in Florida.

Falcon 9 balanced in a vertical posture for the first 15 seconds of flight before pitching over to begin racing away from Florida to the south-east on the standard path to Geostationary Transfer Orbit. Burning some 2,450 Kilograms of propellant per second, Falcon 9 accelerated beyond the speed of sound in just over a minute and encountered Maximum Dynamic Pressure 76 seconds into the flight, throttling back its engines momentarily to reduce stress on the ascending rocket.

The first stage switched off its engines two minutes and 33 seconds into the flight after boosting the rocket to a speed of 2,282 meters per second. Three seconds after MECO – 67 Kilometers in altitude, four pneumatic pushers sent the two stages on their separate journeys with Stage 2 heading into start-up mode to push on toward orbit and Stage 1 set for a high-energy return maneuver to aim for a propulsive landing on SpaceX’s ‘Of Course I Still Love You’ Drone Ship.

As the seventh Falcon 9 Geotransfer Mission of the year, Monday’s flight lacked the propellant reserves for flying the first stage back to Cape Canaveral and used a two- instead of a three-burn return profile – continuing on a ballistic arc after separation from the second stage until firing up for a re-entry burn.


Following staging, the booster used its nitrogen thrusters to re-orient to an engines-first attitude and deployed its actuated grid fins – coming into play for three-axis control when heading back into the dense atmosphere after passing a high point of 119 Kilometers.

Three Merlin 1D engines fired up in a staggered fashion six minutes and 28 seconds after launch when the booster had reached 58 Kilometers in altitude, hitting the brakes to create a survivable re-entry environment for the Block 4 booster which does not yet have a series of ‘Block 5’ re-usability upgrades that will allow it to tolerate even the hottest entry environments with ease. The 22-second entry burn slowed the booster by 857 meters per second to  an entry speed of 1.45 Kilometers per second.

Onboard views from the descending first stage showed the grid fins glowing bright in the hypersonic flow and ablative materials from lower on the booster deposited onto the camera before the video signal went out. Making its way through the sound barrier in reverse direction, the booster used its grid fins to maneuver toward the Drone Ship, holding position 625 Kilometers from the launch site. Firing up its center engine, the booster was in for some throttling- and gimbaling action to enter a vertical descent toward OCISLY and arrest its vertical speed just as the four fold-out landing legs made contact with the floating landing pad.

While the first stage was going through its hot re-entry, Stage 2 was in to earn the money via an on-target delivery of KoreaSat 5A to a Geostationary Transfer Orbit. The 95,000-Kilogram-force MVac engine fired up just two seconds after stage separation to boost the combined second stage & KoreaSat stack into a Low Earth Parking Orbit. Falcon 9 split open and separated its two 13-meter long fairing halves three minutes and 40 seconds into the flight when crossing 115 Kilometers in altitude where aerodynamic forces were no longer a factor.

The second stage fired for five minutes and 53 seconds to enter orbit, followed by nearly 18 minutes of coasting to reach a position near the equator so that the second burn could place the high point of the resulting orbit over the equator on the opposite side of the planet – standard practice for GTO missions.

Having arrived within range of African tracking stations, the second stage re-lit its engine 26 minutes and 52 seconds into the flight on a burn of 61 seconds to significantly raise the apogee and decreasing the orbit’s inclination, reducing the fuel the satellite has to expend on its transition into a stationary orbit. The burn accelerated the vehicle by 2.54 Kilometers per second and Launch Controllers called out a nominal orbit based on readings from the second stage’s navigation platform.

KoreaSat 5A was pushed away via loaded springs just shy of 36 minutes into flight, marking the completion of SpaceX’s mission and the beginning of a 15-year mission for the satellite. KT Sat – a first-time SpaceX customer – will use KoreaSat 5A in tandem with KoreaSat 7, launched earlier this year, to create a powerful multimedia distribution platform for the Asian market.

Through a series of burns using an S400 main engine, KoreaSat 5A will reach Geostationary Orbit where its velocity matches that of the Earth’s rotation to allow the satellite to remain over the same location at all times – aiming for a spot at 113 degrees East where it will work in close proximity to KoreaSat 7 that features a Ku/Ka-Band payload for Internet access, multimedia distribution, broadcasting and Fixed Satellite Services.

Based on Thales Alenia’s Spacebus-4000B2 platform, KoreaSat 5A hosts 36 Ku-Band transponders – twenty with a 54 MHz bandwidth, twelve 36 MHz transponders and four extended Ku-Band transponders feeding steerable beams to direct capacity where it is needed. The satellite is replacing KoreaSat 5 launched in 2006 and will cover five areas spanning from the Arabian Peninsula to Japan including maritime communications areas in the Indian and Pacific Oceans.

Monday’s launch was the 44th overall mission for the Falcon 9 family, continuing to establish its role as an industry workhorse by flying more missions than any other launcher family in 2017 including Russia’s Soyuz and China’s Long March families that usually ranked at the top of the list. Checking off its 16th launch of the year, SpaceX remains on course to a goal of 20 Falcon 9 missions in 2017.

Next up is the secretive mission called ‘Zuma’ that showed up on the launch schedule just recently, identified through documentation SpaceX filed with the Federal Communications Commission. It has been revealed that the payload of the mission was manufactured by Northrop Grumman for operation by an unnamed U.S. Government Agency – a pattern similar to the equally secretive PAN and CLIO satellites ultimately revealed in Snowden Documents to be under direct tasking by the NSA in a program named NEMESIS.

After Zuma, Falcon 9 operations will shift from Launch Complex 39A to the repaired Space Launch Complex 40 – looking forward to its first launch since being knocked out of commission by the September 2016 explosion of a Falcon 9 rocket. SLC-40 will return to service with the Dragon SpX-13 mission to the International Space Station that has been cleared by NASA engineering teams to use a ‘flight-proven’ first stage from an earlier Dragon mission – still pending official announcement that NASA management provided clearance as well.

SpaceX’s last West Coast launch of the year is currently aiming for December 22/23 to send the next batch of Iridium-NEXT communications satellites on their way – also using a flight-proven booster. Spain’s HispaSat 30W-6 communications satellite rounds out the Falcon 9 near-term manifest, though its target launch date has still to be confirmed to be within 2017.

Final preparations for the inaugural Falcon Heavy launch will swing in motion after the Zuma mission clears the pad via final outfitting work on the Transporter, Erector & Launch device as well as ground system modifications needed to support the three-core vehicle. This will be followed by integration and fit checks of the vehicle, starting inside the hangar before Falcon Heavy will make its first rollout to LC-39A for a Wet Dress Rehearsal that may culminate in a Static Fire Test, depending on the performance of the vehicle and ground system. Liftoff, still penciled in for NET Late December, is contingent on a smooth testing campaign and would otherwise move into 2018.