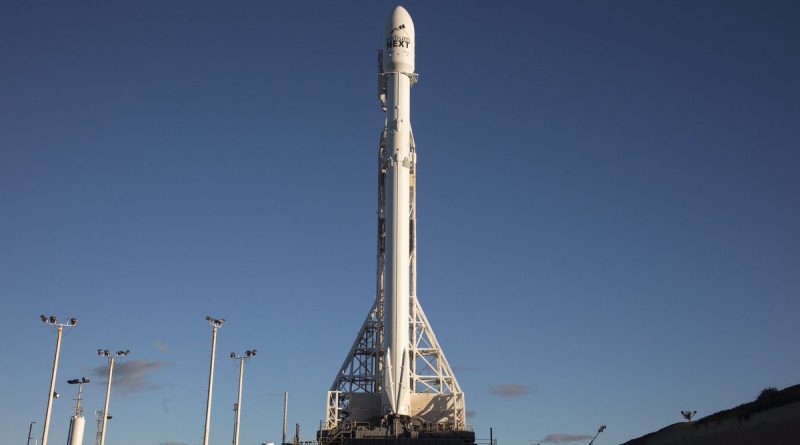 A SpaceX Falcon 9 is standing tall atop its West Coast launch pad in California, working towards a Saturday morning liftoff on its long-awaited Return to Flight mission following the September 1st testing accident and subsequent grounding of the rocket.

Lifting its heaviest payload to date, Falcon 9 will thunder off from Space Launch Complex 4E at Vandenberg Air Force Base and swing to the south, targeting a circular orbit of 625 Kilometers. The first stage will be in charge of powered flight for nearly two and a half minutes before heading off on SpaceX’s next landing attempt on the Autonomous Spaceport Drone Ship. Stage 2 will conduct an initial burn of six and a half minutes to inject the stack into an elliptical transfer orbit for a lengthy coast phase ahead of a very brief, three-second engine re-start.


This is the first flight of the Falcon 9 Full Thrust rocket from Vandenberg and the first SpaceX launch from the west coast in nearly a full year. It marks the start of one of the largest satellite fleet upgrades in history with a total of 72 Iridium-NEXT satellites headed into orbit in the next two and a half years to fully replace the company’s first generation of spacecraft with state-of-the-art satellites, delivering global communications services and building one of the largest remote-sensing constellations collecting the first-ever direct measurement of Earth’s radiation balance.

The 70-meter tall Falcon 9 was rolled to the launch pad in the early hours on Friday and placed in its vertical launch position to begin final preparations for a lengthy launch countdown on Saturday. The mission has an instantaneous launch window because the ten Iridium-NEXT satellites hidden under the rocket’s payload fairing are targeting a specific plane within the existing Iridium constellation – allowing no room for hold-ups in Falcon’s final countdown sequence.

Launch weather forecasts for Saturday’s launch window and the backup launch slot at 17:49 UTC on Sunday call for generally favorable conditions, however, high ground winds are classed as a concern by meteorologists with a 40% chance of violating launch criteria.

SpaceX engineers worked tirelessly over the past four months to identify the cause of the anomaly and came to the conclusion that the high-speed deflagration was the result of the failure of one of three Composite Overwrapped Pressure Vessels (COPVs) within the second stage Liquid Oxygen Tank.

Designed to hold helium pressurant gas at very high pressure, the COPVs were found to be prone to buckling issues of their metal liners which allowed Liquid Oxygen to accumulate in the voids between the liner and composite overwrap. The trapped oxygen then combusted with the carbon overwrap material when friction of the carbon fibers or tank liner provided an ignition source. Formation of solid oxygen due to the cold temperature of the helium being loaded into the COPV was identified as a possible contributing factor.

Going forward, SpaceX plans to develop COPVs that have no buckling issues. To continue launch operations, the company decided to implement an interim solution by going back to an older version of the helium system and loading procedure – adding an additional COPV and loading the helium at higher temperatures. Also, the helium will be loaded well ahead of the sub-cooled Liquid Oxygen so that the pressurization system can reach a fully stabilized state – as opposed to the rapid sequence that simultaneously loaded the rocket with helium and oxygen.

Changes implemented as a result of the failure investigation are evident in the countdown timeline published by SpaceX for Saturday’s mission. In the run-up to fueling, Falcon 9 will be powered up and undergo a multi-hour checkout campaign while teams at the launch pad clear out for the propellant loading sequence. The critical Go/No Go Poll for launch will occur 78 minutes prior to the day’s T-0 target with propellant loading picking up eight minutes later.

The propellant loading sequence has been decompressed for Saturday’s mission with Kerosene loading starting at T-70 minutes and oxidizer tanking at T-45 minutes. In the previous countdown sequence, Falcon 9 was loaded with over 500 metric tons of chilled, densified propellants from T-35 to T-2 minutes in order to achieve the maximum possible propellant mass at liftoff to squeeze the maximum performance out of the vehicle.

Whether this decompressed tanking sequence will become standard for all missions until the new COPV design is available remains to be seen. Despite the large payload mass of over nine metric tons, Saturday’s mission can afford the performance penalty that comes with the more conservative helium system and decompressed fueling sequence – the case for higher-performance GTO missions may be different.

While being loaded with propellants, Falcon 9 will receive its modified flight software based on conditions in the upper atmosphere and the ten Iridium satellites will transfer to internal power around half an hour prior to launch. The fast-paced sequence to transition Falcon 9 to its launch configuration picks up at T-7 minutes with the chilldown of the nine Merlin 1D engines on the first stage. Falcon 9 will switch to battery power and pressurize its tanks ahead of the retraction of the Strongback structure to clear the way for liftoff.

Loading of commodities into the vehicle will close out at T-90 seconds and the Launch Director will provide the final GO call at the same time. Falcon’s flight computers assume full control at T-1 minute to oversee the final pressurization of tanks and arming of the vehicle.

Falcon 9 will come to life at T-3 seconds when the Merlin engines will be commanded to ignite by injecting a self-igniting TEA-TEB mixture into the engines to start the combustion process. Computers will monitor the start-up process to ensure the engines reach a collective liftoff thrust of 700 metric ton-force before committing the rocket to flight.

Rising from its sea-side launch pad, Falcon 9 will maintain a vertical posture for around 20 seconds before pitching onto a departure path taking it south. Heading uphill, Falcon 9 will break the sound barrier just over a minute into the flight and encounter Maximum Dynamic Pressure 69 seconds after liftoff, throttling down the Merlins for a brief moment around MaxQ to limit stress on the vehicle.

MECO – Main Engine Cutoff – is expected two minutes and 24 seconds into the mission, leaving the first stage with a sufficient reserve in propellant to attempt a landing on the Autonomous Spaceport Drone Ship stationed downrange in the Pacific Ocean. Three seconds after engine shutdown, the pneumatic stage separation system will be initiated to cut the connection between the two stages and push the first stage away to clear the way for the ignition of the MVac engine.

Coming to life at T+2:35, the upgraded MVac engine of the second stage will soar to a thrust of 95 metric-ton-force to fire for 6 minutes and 34 seconds to push the stack into a slightly elliptical transfer orbit.

Sending the second stage on its way into orbit – the primary mission objective for Saturday’s flight – the first stage will be set for a fast-paced descent to its powered landing on “Just Read The Instructions”. If successful, the landing could become the first booster recovery after a West Coast launch – all six of SpaceX’s landing successes to date occurred after launches from Cape Canaveral.

It is not clear whether this mission features a two- or three-burn return profile – based on the NOTAMS (Notices to Airmen) issued for this launch, a partial boost back seems to be planned. In that case, the first stage will transition to an engines-first orientation immediately after stage separation and fire-up a subset of its Merlin 1D engines to slow down and limit its downrange travel distance, aiming for the exact position of the Drone Ship.

A re-entry burn, typically employing three engines, will occur when the booster is arriving back in the discernible atmosphere to slow down and shield the engine section from the re-entry environment. What follows is a minute-long atmospheric descent with four actuated grid fins in charge of steering the rocket stage toward the drone ship by modifying its angle of attack and flying out any cross-track errors.

Firing up its center engine just over half a minute prior to touchdown, the booster will home-in on the SpaceX logo in the center of the drone ship with four landing legs folding out just seconds before touchdown. If successful, this will be SpaceX’s fifth landing at sea.

While the first stage goes through the motions for its speedy return, Stage 2 will be headed uphill – jettisoning the protective payload fairing three minutes and 15 seconds into the flight when it will be out of the dense atmosphere. Flying across the Pacific, the second stage will head into terminal guidance mode late in its burn and safe its Flight Termination System when approaching cutoff nine minutes and nine seconds after lifting off.

The second stage is then set for a lengthy coast phase of 43 minutes with re-start of the MVac engine set for T+52 minutes and 31 seconds. The second burn of the mission is only a three-second firing of the MVac engine, sufficient to achieve the target circular orbit 625 Kilometers in altitude, inclined 86.66 degrees.

The ten Iridium-NEXT satellites will depart their two-tier, cylindrical launch adapter in a sequential fashion over a 15-minute sequence picking up at T+59:16. Starting out in a lower orbit than the rest of the constellation, the satellites will complete checkouts before phasing themselves into operational positions within the Iridium constellation that orbits Earth at an altitude of 780 Kilometers.

Iridium is the only communications provider with truly global coverage, possible through a large constellation of 66 active satellites in a careful orbital arrangement that covers every spot on Earth, 24 hours a day for worldwide voice and data communications through satellite phones and other transceiver units.

Weighing in at 860 Kilograms, each Iridium satellite covers a 4,700-Kilometer wide footprint – connecting to user terminals through a large L-Band antenna and routing data via space-to-space links with neighboring satellites to ship customer data packets to their respective destination.