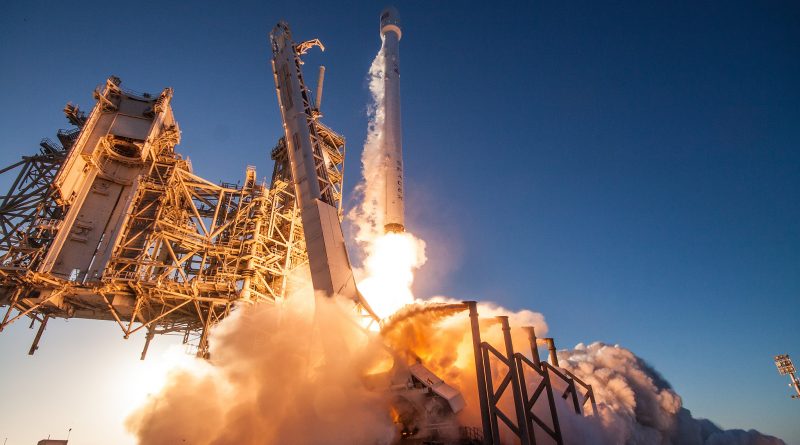 A powerful satellite is on its way to join Inmarsat’s Global Xpress fleet to deliver seamless global Internet and data connectivity to airline passengers, maritime crew and government users after successfully launching atop a SpaceX Falcon 9 rocket on Monday.

Blasting off from Launch Complex 39A at the Kennedy Space Center on Monday at 23:21 UTC, Falcon 9 was tasked with its heaviest Geotransfer delivery to date. Weighing in at 6,086 Kilograms, the Inmarsat 5-F4 satellite required Falcon 9 to fly in an expendable configuration with its first stage finding a watery grave in the Atlantic Ocean instead of a rocket-powered landing atop SpaceX’s drone ship.

Joining three Global Xpress satellites already in orbit, Inmarsat 5-F4 enjoyed a smooth ride on the Falcon 9 that fired its first stage for a little under three minutes before the Mvac-powered second stage took over for a pair of engine burns – first into a Low Earth Parking Orbit for a coast phase followed by the high-energy injection into the targeted Supersynchronous Transfer Orbit peaking nearly 70,000 Kilometers in altitude.

The satellite was sent on its way 32 minutes after liftoff and checked in with ground station’s in Australia just ten minutes later to confirm its health after thundering into orbit atop SpaceX’s workhorse rocket that checked off its 33rd successful launch.


Global Xpress is a $1.6 billion project by Inmarsat to create a robust constellation of high-capacity satellites to connect aircraft, deep sea vessels and mobile users on land. Outfitted with Ka-band transponders, the Global Xpress satellites deliver Wifi services for airline passengers, connectivity to ship crews as they cross the world’s oceans and communications services to governments.

The four Inmarsat-5 spacecraft are close carbon copies, all based on Boeing’s 702 High-Power satellite platform and outfitted with high-capacity Ka-Band payloads. The first three Global Xpress satellites were launched atop Russian Proton rockets while the fourth, built under a contract option with Boeing, was booked on a SpaceX launch. Initially planned to fly on a Falcon Heavy, but due to delays to the heavy-lifter’s debut Inmarsat 5-F4 switched to an expendable Falcon 9 to stay reasonably close to its in-service schedule.

The first Inmarsat-5 satellite is tasked with serving Europe, the Middle East and Africa, the second is stationed over the Atlantic Ocean and the Americas and the third provides coverage to the Asia-Pacific Region and Australia. Inmarsat 5-F4 will begin its service life growing Inmarsat’s capacity over Europe, the Middle East, North Africa and India. The satellite will also ensure the continuation of global services by acting as a spare should one of the three constellation satellites encounter any problems in the future.

Global Xpress, though still in its introductory phase, is already delivering services to around 1,000 ships and aircraft of several European airlines with agreements in place to add receivers to aircraft of Asian airlines. Through the initial operational phase with the three-satellite constellation, Inmarsat said it identified areas where traffic is likely to be concentrated. Depending on whether these trends continue, Inmarsat 5-F4 may be relocated to reinforce the existing constellation where required.

Inmarsat 5-F4 was originally targeting a Falcon Heavy launch in 2016, but repeated delay’s to SpaceX’s tri-core rocket prompted the switch to an expendable Falcon 9 to avoid a significant delay, likely beyond 2017. Another Inmarsat satellite, owned in partnership with Greece’s Hellas-Sat, was moved to an Ariane 5 rocket but the London-based company said it has contract options to launch more satellites with SpaceX in the future.

Monday’s launch marked the debut of a modified Falcon 9 upper stage that allows Liquid Oxygen and Helium pressurant gas to be loaded simultaneously to speed up the propellant loading procedure and address issues uncovered after last September’s Falcon 9 testing mishap.

An in-depth investigation into the September 1st explosion of a Falcon 9 atop its SLC-40 launch pad came to the conclusion that the high-speed deflagration was the result of the failure of one of three Composite Overwrapped Pressure Vessels (COPVs) within the second stage Liquid Oxygen Tank. Voids formed between the metal inner liners and composite overwrap of the vessels allowed LOX to accumulate as the tank was filled while Helium was forced at high pressure into the COPV.


The trapped oxygen then combusted with the carbon overwrap material when friction of the carbon fibers or tank liner provided an ignition source. Formation of solid oxygen due to the cold temperature of the helium being loaded into the COPV was identified as a possible contributing factor.

As a stop-gap measure to return to flight as soon as possible, SpaceX decided to go back to a previous iteration of the helium system and loading procedure – adding an additional COPV and loading the helium at higher temperatures. Also, the helium was loaded well ahead of the sub-cooled Liquid Oxygen so that the pressurization system can reach a fully stabilized state. This all came at the cost of overall launch vehicle performance and SpaceX said the company was working out manufacturing changes to enable the production of buckle-free COPVs that would Falcon 9 to go back to the high-performance configuration.

Monday’s launch came after what SpaceX called one of the smoothest launch campaigns to date and the day’s countdown would be no exception. The 70-meter tall Falcon 9 rocket was rolled to the launch pad and took its vertical liftoff position for a lengthy countdown operation starting with the power-up of the launch vehicle for several hours of checkouts while personnel at the former Saturn V and Shuttle launch complex finished buttoning up the vehicle and ground facility.

With a clean vehicle and favorable weather forecast, all stations reported readiness for the highly choreographed tanking sequence that picked up 70 minutes prior to liftoff to fill the two-stage rocket with over 500 metric tons of sub-cooled Liquid Oxygen and chilled Rocket Propellant 1 along with Helium pressurant gas. While propellant components went through a carefully throttled filling sequence, Falcon 9 received its flight software and Inmarsat 5-F4 went to internal power in preparation for its ride into orbit.

In the last ten minutes of the count, Falcon 9 completed exercises of its various engine trim valves and actuators, chilled down its nine Merlin 1D main engines and transferred to internal power while the Strongback structure moved back 1.5 degrees to be ready to rapidly retract at the moment of liftoff. Tanking closed out in the last three minutes of the countdown and Falcon 9 assumed full control at the T-1 minute mark followed by a final check with the Launch Director who provided clearance for liftoff.

The typical green flame of Falcon’s igniter fluid emerged from the business end of the rocket as the nine engines soared to a collective liftoff thrust of nearly 700 metric ton-force. Blasting off at the opening of the day’s launch window, Falcon 9 cleared the former Shuttle service structure and balanced in a vertical posture for the first 15 seconds of its mission before pitching over to begin flying to the south east, departing Florida on the standard route to Geostationary Transfer Orbit.

Burning 2,450 Kilograms of propellant per second, Falcon 9 accelerated beyond the speed of sound just after passing T+1 minute and throttled down its engines to reduce stress on the vehicle as it passed Maximum Dynamic Pressure at T+1 minute and 17 seconds.

The first stage continued firing until T+2 minutes and 46 seconds, using up all of its propellant to generate the extra bit of performance needed to haul the heavy satellite to its orbital destination. Falcon’s booster accelerated the rocket to 2.72 Kilometers per second versus 1.7km/s for a high-margin recovery mission that would require engine shutdown around 25 seconds earlier to preserve sufficient propellant for a return to Cape Canaveral.

MECO was followed four seconds later by the pneumatic stage separation, sending the first stage clear of the extended nozzle of the MVac engine for ignition at T+2:56 on a burn of just over five and a half minutes. This first burn of the 95,000 Kilogram-force MVac was tasked with lifting the vehicle into a Low Earth Parking orbit for a coast phase toward the equator as part of a standard two-burn GTO delivery.

The protective payload fairing was jettisoned three and a half minutes into the flight when the stack had reached 115 Kilometers in altitude where aerodynamic forces were no longer a threat to the satellite. MVac showed excellent performance during its burn and shut down as planned at T+8.5 minutes, marking the start of 18 minutes of coasting so that the second burn could occur while passing over the equator to place the high point of the injection orbit above the equator on the opposite side of the planet – standard practice for GTO launches to ease the process of maneuvering the satellite into its operational orbit.

Falcon 9 re-appeared 25 minutes into the flight after traversing a radio black zone over the Atlantic and re-started the MVac 26 minutes and 59 seconds after launch, tasked with a burn to accelerate the rocket by 2.7 Kilometers per second and lift Inmarsat 5-F4 into a Supersynchronous Transfer Orbit.

This mission used a burn-to-depletion-type maneuver instead of a guided shutdown to provide the maximum energy to the satellite’s orbital injection. The second burn was expected to last a minimum of 56 seconds, though shutdown came after 61 seconds – illustrating the extra bit of delta-v provided beyond what would have been possible with a guided shutdown and all its margins.

Orbital parameters were reported nominal after the end of the second burn and four minutes of maneuvering prepared for the spring-loaded separation of the spacecraft at T+32 minutes.

Inmarsat 5-F4 was tracked in an orbit of 381 by 68,839 Kilometers, inclined 24.5 degrees. From there, the satellite will use its chemical main propulsion system for a series of maneuvers to circularize the orbit and reduce its inclination followed by deployment of the satellite’s solar arrays once in a drift orbit near GEO. The ion propulsion system will take over in June for several weeks of maneuvering and fine-tuning to allow the satellite to reach its fully synchronous orbit.