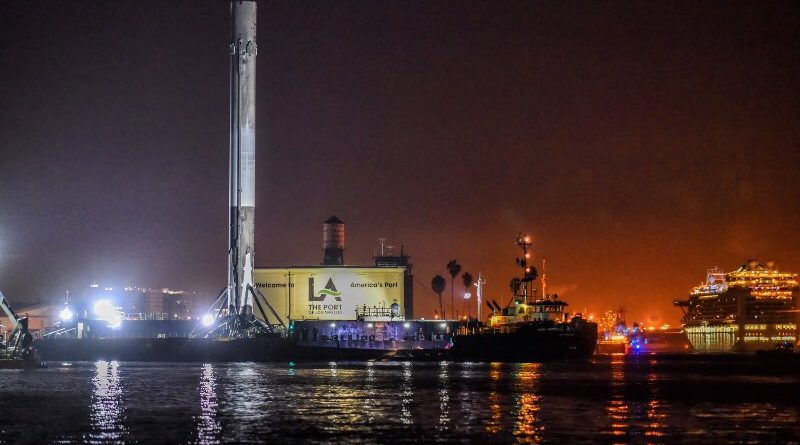 SpaceX’s Autonomous Spaceport Drone Ship was towed into the Port of Los Angeles in the early hours on Tuesday, marking the triumphant return of the first Falcon 9 booster to stick a sea-based landing in the Pacific Ocean.

Falcon 9 made an impressive return to flight on Saturday, blasting off from SLC-4E at Vandenberg Air Force Base at 17:54 UTC to deliver the first ten Iridium-NEXT communications satellites to orbit and attempt a booster landing on the Drone Ship “Just Read The Instructions.” It was the first SpaceX launch in five months, the first after the September 1st explosion of a Falcon 9 atop its Cape Canaveral launch pad.

Thundering into clear skies, the 70-meter tall rocket swung to the south to begin its trip to dispatch the first ten of at least 70 Iridium Satellites to be launched atop the Falcon 9 in the next year and a half. The rocket’s nine Merlin 1D engines shut down two minutes and 25 seconds into the flight, having accelerated the rocket to a speed of over 1.9 Kilometers per second, more than five times the speed of sound.


Following a clean separation of the stages, the rocket’s second stage lit up its single MVac engine to push the stack into a preliminary orbit while the first stage began its speedy return sequence with a quick turn to an engines-first orientation. A subset of the booster’s engines lit up just after four minutes into the mission for a retrograde braking maneuver of half a minute, slowing the vehicle down and controlling its downrange travel distance to home in on the Drone Ship that held position 371 Kilometers due south of the Vandenberg launch site.

The booster again fired up its engines six and a half minutes into the flight for a burn of 16 seconds to step on the brakes and slow the vehicle down for atmospheric entry. Next was nearly a full minute of unpowered flight through the atmosphere during which the four actuated grid fins assumed the crucial role of steering the 47-meter tall booster toward the drone ship. With the drone ship appearing in view of the onboard camera, the booster ignited its center engine for the final landing maneuver – making last course corrections and unfolding four landing legs before setting itself down on the Drone Ship’s deck just over eight minutes after lifting off from California.

Video from the drone ship showed the booster standing tall after its first successful landing in the Pacific Ocean. Remote safing of the rocket was completed by the Launch Team in California before engineers re-boarded the ship to secure the vehicle on deck for the trip back to land.

SpaceX was eager to complete a recovery on a West Coast launch to test out procedures learned at Cape Canaveral at the company’s west coast port to be able to rapidly process future re-flight missions of rocket boosters. With the rocket firmly tied to the ship’s deck, the convoy began its trip back to the Port of Los Angeles on Sunday.

While the first stage made its successful landing, the rocket’s second stage arrived in orbit to conclude the day’s primary mission by making a second engine burn 52 minutes after launch and then release its ten passengers into a 625-Kilometer orbit. All ten Iridium-NEXT satellites checked in with ground stations and were reported in good health. They are now in the process of being commissioned to enter the existing satellite constellation around three months after launch.

A Falcon-sized crane was set up along an outer dock at the Port of Los Angeles to hoist the booster off its landing platform and onto a stand on the ground for final safing steps. Just Read The Instructions was towed into port before sunrise on Tuesday and reached its dock just as dawn broke.

Operations moved quickly to lift the booster from the Drone Ship onto firm ground for a series of steps to ready it for transport – draining remaining fuel and igniter fluid from the tanks, removing the four landing legs and moving the stage to a horizontal position. Where the booster will be taken to has not been disclosed by SpaceX; the company’s Hawthorne headquarters is around 20 Kilometers north of the port as the crow flies and would provide a fully outfitted facility to refurbish the rocket for its future endeavors.

The booster, identified as serial number 1029, is SpaceX’s seventh recovered first stage with five successful landings at sea and two land-based returns to Cape Canaveral’s Landing Zone 1. What the future will hold for this vehicle is not yet clear, but given its nearly-pristine condition after returning to port, it is very likely that booster 1029 will be flown again, possibly as a side booster of SpaceX’s Falcon Heavy rocket that is set to debut later this year.

Having checked off a successful Return to Flight with the added bonus of booster recovery, SpaceX is now expected fly missions every two to three weeks once launches from Cape Canaveral can be resumed. Preparations are in full swing at Cape Canaveral for the next Falcon 9 mission which will involve the EchoStar-23 satellite heading to a Geostationary Transfer Orbit. This mission will mark another milestone, given it will take place from Launch Complex 39A at the Kennedy Space Center.

SpaceX signed a 20-year lease for Launch Pad 39A in April 2014 to turn the former Shuttle launch pad into a suitable launch facility for the company’s Falcon 9 and Falcon Heavy rockets. As SLC-40 was taken out of commission by the dramatic testing accident back in September, SpaceX re-doubled its efforts to bring Pad 39A online to take over all East Coast launches until SLC-40 is back in service and missions can be split between the two with 39A in charge of Falcon Heavy missions plus Falcon 9 launches in support of the International Space Station.

The launch of EchoStar-23 is currently aiming for a January 26 target with a Static Fire test expected several days in advance, however, it is understood that the target launch date may move into the first half of February as open work at the launch pad continues.

SpaceX’s first re-flight mission of a Falcon 9 booster is also approaching.  The SES-10 satellite that will ride into orbit on that mission arrived at Cape Canaveral on Sunday to enter final processing at the launch site. SES was the first of SpaceX’s customers to commit to launching on a re-use mission which is currently second or third on Falcon 9’s Cape Canaveral manifest, depending on whether NASA can close its own reviews into the September 1st anomaly in time for a mid-February launch of SpaceX’s next ISS cargo mission.