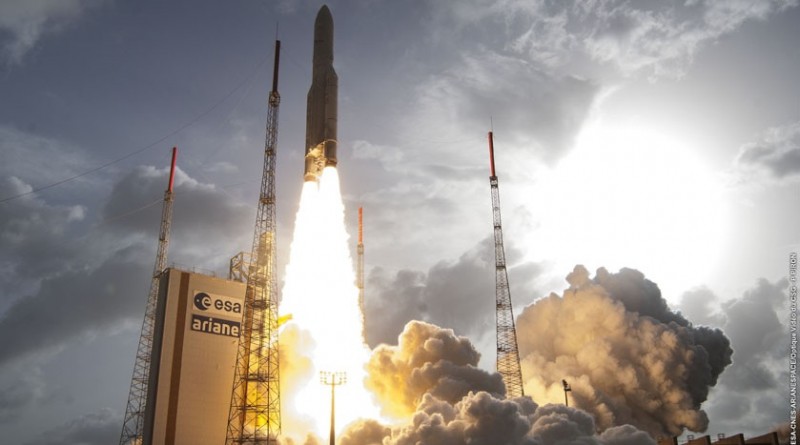 Commercial Satellite operator Eutelsat has signed a multi-launch agreement with International Launch Services, acquiring slots on Proton rockets for the period of 2016 to 2023, and signed with Arianespace for a rare single-payload launch atop the powerful Ariane 5 rocket in early 2016.

Eutelsat announced this week a decision to switch from a dual-payload launch on Europe’s Ariane 5 rocket to a single-payload mission to accelerate the launch of the Eutelsat 65 West A satellite to the early months of 2016 instead of waiting for a co-passenger to be found. Ariane 5 typically hosts two commercial communications satellites when flying to Geostationary Transfer Orbit – one satellite is larger and rides atop a Sylda payload adapter which encloses the second, smaller satellite in the lower payload berth of the rocket. This allows satellite operators to split the bill for Ariane’s services.

Though in recent times it became harder to find passengers for the lower launch slots on Ariane 5 and Eutelsat was facing a longer wait for its launch due to the lack of a co-passenger. Eutelsat made the decision to pay for an entire Ariane 5 rocket and move up in the launch queue and get the 65 West A satellite positioned over Latin America before the 2016 Summer Olympic Games in Rio de Janeiro.


Eutelsat 65 West A is based on Space System/Loral’s LS-1300 satellite bus, outfitted with a hybrid payload of 24 Ka-, 24 Ku- and 10 C-Band transponders to deliver a variety of communications services to key markets in Brazil and areas of South & Central America. The satellite, weighing in at 6,600 Kilograms, will provide Direct-to-Home television services, video distribution and broadband data services.

The launch of Eutelsat 65 West A is currently expected for the first quarter of 2016 and may likely become the year-opener for the Ariane 5.

On Friday, Eutelsat and International Launch Services – the commercial operator of Russia’s heavy-lift Proton rocket – announced a multi-launch agreement for a number of launches of Eutelsat-operated spacecraft atop the Proton. The agreement spans a seven-year period beginning next year and is designed to provide schedule flexibility to satellite fleet operator Eutelsat.

With this agreement, Eutelsat reaffirms the company’s confidence in the quality program implemented by ILS and Proton’s manufacturer Khrunichev to improve the spotty safety record of the Proton that had suffered launch failures at least once a year since the beginning of 2010. A number of satellite operators responded to Proton’s safety issues by moving their spacecraft to other launch providers, primarily Arianespace and SpaceX with its Falcon 9 rocket. This also led to satellites moving to United Launch Alliance’s Atlas V rocket that had not seen much commercial business in recent years.

Though as this year’s failure of the Falcon 9 has shown, a market with only two regularly used launchers may not be sufficient for assured access to space for the industry. Eutelsat expressed that launch diversity is of great value to the company, proven in this latest agreement with ILS.

The first Eutelsat satellite lined up in Proton’s manifest is Eutelsat 9B which was already enlisted for a Proton launch prior to the multi-launch agreement. Set for liftoff in January, Eutelsat 9B is a high-power broadcast satellite constructed by Airbus Defence and Space using the Eurostar-3000 satellite platform. Hosting 66 Ku-Band transponders, the satellite will take up station in a position from where it can deliver regional and wide-beam communications to European countries to increase Eutelsat’s capacity for video distribution to Europe’s key markets.

Also hosted on the satellite is a payload for the European Data Relay Satellite System that utilizes Geostationary Communications Satellite for data relay between ground stations and spacecraft in lower orbits.