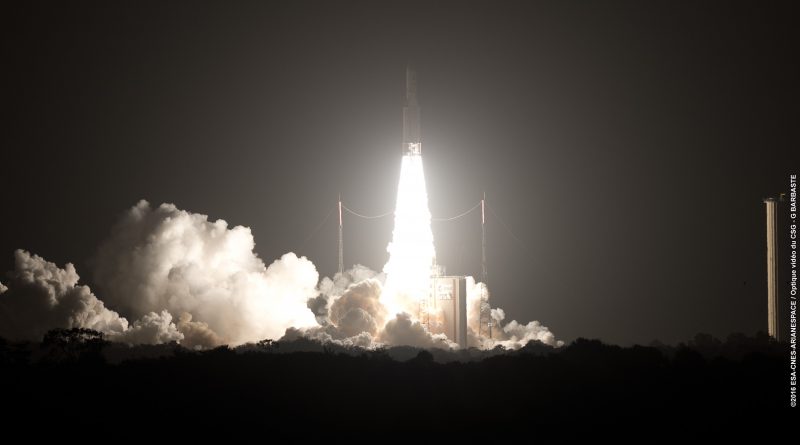 The Eutelsat 65 West A Communications Satellite received a smooth ride by its Ariane 5 launch vehicle, arriving in a relatively accurate orbit to begin a ten-day climb into Geostationary Orbit.

Eutelsat 65 West A was booked for a solo flight on Ariane 5 to keep its in-service schedule, aiming to start delivering TV and video distribution for the Rio Olympics starting in August. Because no co-passenger in the 3,000-Kilogram range could be found for an early 2016 launch, Eutelsat followed Intelsat’s example and decided to pay for a dedicated Ariane 5 rocket.

The 53-meter tall rocket jumped off its pad at 5:20 UTC on Wednesday, racing into the night skies over the Guiana Space Center. Pitching and rolling on its planned course, the vehicle was set for a flight across the Atlantic Ocean, passing the speed of sound just 49 seconds after liftoff. The two Solid Rocket Boosters finished their job a little over two minutes into the mission and Ariane 5 headed on powered by the Vulcain 2 engine of the Core Stage alone.


The Core Stage fired for nearly nine minutes before the ESC-A second stage assumed control for a burn of fifteen and a half minutes. The VA229 mission was aiming for an orbit of 250.0 by 35,746 Kilometers at an inclination of 0.5 degrees. Only carrying a solo passenger allowed Ariane 5 to take advantage of surplus performance to conduct a reduction of inclination from the typical 6° to 0.5°.

Eutelsat 65 West A was sent on its way 27 minutes into the mission and the ESC-A upper stage headed on for a one-hour DEMOFLIGHT, filled with engineering tests to demonstrate the stage’s ability to support multi-burn missions with extended coast phases when outfitted with the new VINCI engine that will part of the ESC-B, the upper stage of the Ariane 6.

The insertion orbit of E65W shows a slight difference to the target orbit specified by Arianespace and Airbus Defence and Space with a 20-Kilometer shortfall on perigee and around 80km of excess altitude at apogee. The ESC-A upper stage successfully completed its apogee-reduction as part of the DEMOFLIGHT after spacecraft separation.

Being released into orbit, Eutelsat 65 West A successfully made contact with ground stations and completed the initial deployment of its solar arrays to be able to generate electrical power. The satellite was set for its transition to solar-pointed attitude later on Wednesday prior to the start of apogee maneuvers later in the week to mark the start of Eutelsat’s climb to GEO.

Eutelsat 65 West A is a high-capacity communications satellite, built by Space Systems/Loral based on the flight-proven LS-1300 platform. It is outfitted with a hybrid communications platform comprised of 10 high-power C-Band transponders delivering a broad coverage zone over the Americas, 24 Ku-Band transponders to generate a pair of coverage zones over South and Central America, and a high-throughput Ka-Band payload to deliver spotbeam coverage over densely populated areas.