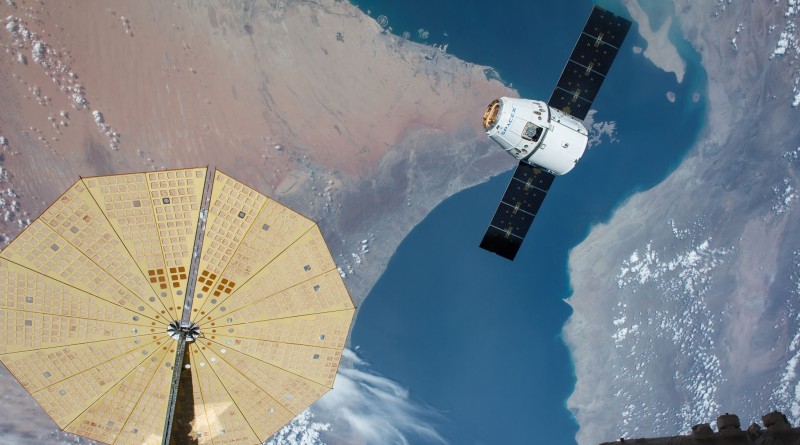 The SpaceX Dragon departed the International Space Station on Wednesday after a one-month stay, en-route to a splashdown landing in the Pacific Ocean planned later in the day to return valuable scientific research to Earth. Capping a successful return to flight mission after the 2015 Falcon 9 launch failure, Dragon is set for a blazing re-entry to set up for a parachute-assisted landing followed by a return to shore to deliver over 1,600kg of cargo to researchers and engineers.

The Dragon SpX-8 mission began on April 8 with a thundering liftoff atop a Falcon 9 rocket from Florida’s Space Coast. While Dragon received a smooth ten-minute ride into orbit, the Falcon 9 rocket took its place in space history as the first to master a landing at sea, touching down atop the Autonomous Spaceport Drone Ship for a return to shore and an extensive testing campaign ahead of a re-flight in an operational mission.

Dragon arrived at ISS on April 10 after a two-day journey, raising its orbit to set up for the final climb up to ISS from straight below to reach a position within reach of the Station’s robotic arm. Once captured by Canadarm2, the Dragon was berthed to the Harmony module’s Earth facing port – taking a spot next to the Cygnus OA-6 spacecraft berthed to the Unity Node, marking another first with both commercial cargo vehicles berthed to ISS simultaneously for the first time after Commercial Resupply Services started in 2012.

The Dragon spacecraft was opened for business one day after its arrival, allowing the crew to begin unloading 3,136 Kilograms of cargo delivered by the spacecraft – much of the internal cargo was science equipment for dozens of experiments, giving the crew plenty of work over the course of the docked mission as some of the experiments were to be completed prior to Dragon’s departure to return to Earth aboard the spacecraft.

Riding to ISS aboard Dragon was a group of mice involved in the third Rodent Research study, looking at a novel drug that could counter bone and muscle loss in muscle-wasting diseases on Earth and in astronauts undergoing long-duration space flight. Also aboard the Dragon was the next Veggie study that will grow lettuce plants aboard ISS, an experiment examining flow processes at the nano-scale, and experiments looking at the microbial environment on ISS, studying gene expression in space and attempting to grow pristine crystals in the microgravity environment.

Return cargo aboard the Dragon includes a variety of scientific experiment materials as well as vehicle hardware returning to Earth for inspections. Stowed inside laboratory freezers and cold bags is the bulk of science samples collected by Scott Kelly over the course of his one-year stay in orbit, more than 1,000 tubes of blood, saliva and urine samples eagerly awaited by scientists on the ground.

While the crew was busy transferring internal cargo, the Station’s robotic arm was in action on April 16, retrieving the Bigelow Expandable Activity Module from Dragon’s trunk section and installing it on the Node 3 module for a two-year demonstration mission of inflatable habitat technology in the space environment. BEAM is awaiting inflation at the end of May ahead of the first ingress by the crew to outfit the module with sensors to measure its condition over a two-year stay.

Also part of Dragon’s mission was a test for upcoming Commercial Crew Vehicles. Intentional defects were introduced in Dragon’s Thermal Protection System for a test of robotic survey techniques that are needed for crew vehicles staying at ISS for extended mission durations of six months. The robotic survey with Canadarm2 was completed last week to show that the robot’s cameras are sufficient for examining docked spacecraft for damage as a result of debris hits prior to departure from ISS.

Final cargo loading on the Dragon was completed by the crew on Tuesday when the last Double Cold Bags filled with time-critical cargo were placed inside the cargo module followed by the collection of closeout photos and crew egress accompanied by the removal of ventilation equipment ahead of the closure of Dragon’s hatch. To finish their day, the crew began to configure the vestibule between the Dragon and the Harmony module – installing the Center Disk Cover in the Common Berthing Mechanism Hatchway and putting in place four Controller Panel Assemblies to drive the sixteen CBM bolts that were firmly holding Dragon in place for the docked mission, ensuring a tight pressure seal between ISS and Dragon.

Data and power jumpers were removed with the exception of one final power connection that was left in place overnight to keep Dragon powered by ISS. After getting up early on Wednesday, the crew removed that final jumper and closed up the Harmony hatch for the standard leak check that confirmed both hatches were holding pressure.

Dragon was unberthed at 11:02 UTC when four set of four bolts were released within the Common Berthing Mechanism and four capture latches let go of the Dragon. Now in control of Dragon, Canadarm2 was commanded to first back the spacecraft away from Harmony followed by a lengthy move to the release position.

Dragon was commanded to resume solar array rotation for power generation and the vehicle’s navigation instruments were activated for checkouts, operated by Mission Controllers in Hawthorne, California. To set up for release, robotic control was handed back to ISS for the crew to finish preparing for the release sequence. With Dragon positioned for release, the craft was put through a series of checkouts of its Flight Control System and the navigation system including the Thermal Imagers and the two LIDARs to ensure correct data was supplied from both.

ISS was commanded to Smooth CMG Control for the release sequence to avoid any attitude disturbance while Dragon remained in Free Drift to prevent it from moving at the time of release. Making inputs on the Rotational Hand Controller, ESA Astronaut Tim Peake enabled the release sequence – opening snares inside the Latching End Effector of the Robotic Arm to let go of Dragon’s Flight Releasable Grapple Fixture on the GNC Bay Door of the spacecraft.

Release of the Dragon spacecraft was confirmed at 13:19 UTC, right on time. Per their procedures, the crew waited for the robotic arm to clear the grapple fixture of Dragon by taking advantage of orbital mechanics before beginning to slowly pull the arm away from the spacecraft. When the LEE was clear, the arm was moved to a back-off position at a distance of around 4.5 meters to clear Dragon’s way for departure.

Three minutes after release, Dragon recovered from Free Drift and started firing its Draco thrusters as part of a gentle Departure Burn. This first small burn set Dragon on a course away from the immediate vicinity of ISS with a second departure burn occurring just one and a half minutes later to accelerate Dragon’s departure rate along the R-Bar, making its way straight down to exit the ISS Keep Out Sphere.

On the way down the R-Bar, Dragon conducted a 180-degree yaw-maneuver, essentially flipping its nose around to point the thrusters to the appropriate direction for the third and largest departure maneuver. This third burn began at 13:31 UTC and placed Dragon on its trajectory to head out of the Approach Ellipsoid 17 minutes after release. With Dragon moving away from ISS on a safe trajectory, the mission ended integrated operations between Mission Control Houston and MCC-X in California, now in charge of all mission decisions to bring Dragon home safely.

The vehicle will spend nearly five hours in Free Flight to set up for its deorbit burn that has been precisely calculated to allow Dragon to make an on-target landing. One of the critical events of the Free Flight is the closure of the GNC Bay Door to protect the navigation sensors from the harsh re-entry environment.

Dragon will begin firing its Draco thrusters at around 18:01 UTC for a precisely targeted deorbit burn that will be nine to ten minutes in duration to slow the Dragon down by around 100 meters per second, placing it on a path to intercept the dense atmosphere at a location that allows Dragon’s Entry Guidance System to maneuver the craft to the desired chute deploy position.

17 minutes after the start of the deorbit burn, Dragon will jettison its trunk section containing the solar arrays, destined to burn up in the atmosphere. Around 20 minutes after the conclusion of the Deorbit Burn, Dragon will begin re-entry, hitting the dense layers of the atmosphere and relying on its PICA-X heat shield that will have to withstand temperatures of up to 1,600°C.

During the Entry Phase, Dragon uses its Draco Thrusters to stabilize its position and control its lift to precisely target the desired landing location – previous Dragon landings had remarkable accuracy in targeting a precise spot in the Pacific Ocean.

Splashdown is expected at 18:55 UTC in the Pacific Ocean, 370 Kilometers off the coast of California where recovery forces will be awaiting the arrival of the vehicle. In previous cases, Dragon’s landing was very close to the bulls-eye target, allowing teams on the recovery ships to track a large portion of the vehicle’s descent under its three main parachutes. Critical cargo retrieved from Dragon will be shipped back to NASA within 48 hours of landing for post-flight analysis and distribution to the participating scientific institutions.