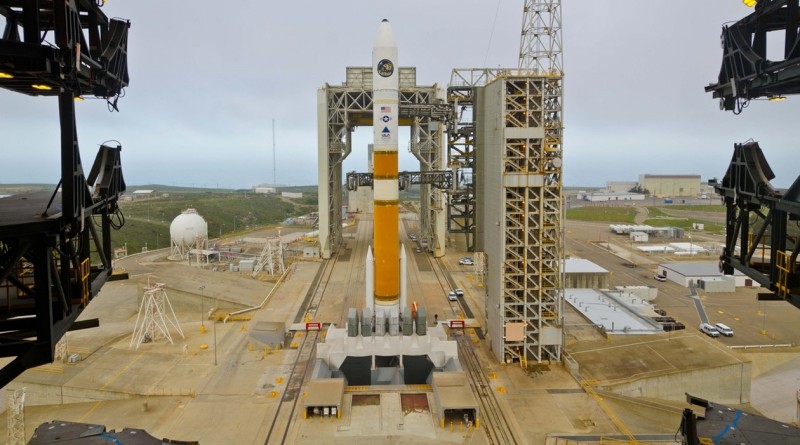 A Delta IV rocket is set for a classified launch on Wednesday from Vandenberg Air Force Base, California, lifting a satellite for the National Reconnaissance Office. Liftoff from Space Launch Complex 6 is set for 11:39 UTC, the opening of a classified launch window. In the typical secrecy surrounding NRO launches, no information is available on the NROL-45 payload, though the ascent trajectory and launch vehicle procurement information reveal the identity of the satellite.

As an intelligence agency tasked with the design, construction and operation of all U.S. reconnaissance satellites, the National Reconnaissance Office goes through great lengths to keep the identity of all NRO satellites secret. However, a number of clues can reveal the nature of NRO missions such as the launch site, launch window, launch vehicle type and ascent path. Some cases are easier to solve while other NRO missions can only be narrowed down to a few candidates.


NROL-45 is one of the more trivial cases and, with high certainty, represents a Topaz radar satellite. This information can be deduced from launch vehicle procurement information as the Atlas V and Delta IV rockets for the NROL-41, 25, 39 and 45 satellites were part of a block-buy in support of a single program. The three previous launches targeted 123-degree retrograde orbits, consistent with that of radar satellites. Additionally, the Atlas V 501 and Delta IV M+ (5,2) launch vehicles are very specialized rockets with large-diameter fairings and have only been used for launches of FIA radar satellites and the X-37B space plane.

Preparations for the NROL-45 launch started at Vandenberg back in November 2014 when the Delta Mariner arrived in port, delivering the Common Booster Core, Delta Cryogenic Second Stage and Payload Fairing for this mission. The first and second stages were mated and remained in storage before being moved to the launch pad at SLC-6 – a launch site originally constructed in the 1960s and once envisioned to become the West Coast Launch Site for the Space Shuttle.

Topped with the NROL-45 payload encapsulated in Delta’s protective payload fairing, the launch vehicle will head into a lengthy overnight countdown operation beginning with the retraction of the Mobile Service Tower. Weather will not be getting into the way of launch on Wednesday as meteorologists issued a 100% chance of favorable conditions for the classified launch window as well as the backup slot on Thursday.

Lifting off from SLC-6, Delta IV will be powered by its RS-68A main engine and twin Solid Rocket Boosters, swinging to a trajectory taking it to the south west. The twin boosters will fire for one and a half minutes before separating from the rocket which will continue onward under the power of its cryogenic main engine. The fairing will separate towards the end of the first stage burn which is expected to last around four minutes.

As with all NRO missions, Delta IV will fly into a news blackout at the point of payload fairing separation. No news on mission progress will be coming forward with the exception of an announcement of launch success some time after spacecraft separation.

The Delta Cryogenic Second Stage will be tasked with a pair of main engine burns, employing the RL-10B engine to first boost the stack into an elliptical parking orbit followed by a circularization firing. Spacecraft separation is expected around one and a half hours after liftoff. Completing its primary mission, the second stage will perform a deorbit maneuver for a targeted destructive re-entry over the Indian Ocean.

Wednesday’s launch is the first of four planned NRO missions lined up for 2016. NROL-37 is set for launch in May, using the massive Delta IV Heavy rocket in the vehicle’s only planned flight of 2016. NROL-61 will launch atop an Atlas V 421 rocket in June and NROL-79 will close out the year in December, launching on the 401 version of Atlas V. The variety of launch vehicles used by the NRO missions suggests different payloads and orbits will be involved in these launches.

For United Launch Alliance, the launch will be the second in less than one week coming after Friday’s successful GPS launch.

Countdown Operations will get underway Tuesday evening, local time. The first step is the retraction of the large Delta IV Mobile Service Tower of SLC-6, moving it to its launch position at a safe distance to the Delta IV Launcher around eight hours ahead of the launch window open time. The terminal countdown begins at T-4 hours and 15 minutes & Holding with the initialization of the countdown and activation of the Delta IV Flight Control Assembly. RIFCA, the Redundant Inertial Flight Control Assembly will undergo detailed checks for the first portion of the countdown. RIFCA is the brain of the rocket controlling all functions during flight.

Extensive Delta IV testing will be conducted over the course of the countdown including electrical checks, flight control system testing, propulsion system verifications, communication checks and Flight Termination System testing. At the pad, teams will finish close outs of the rocket and the various ground systems before the launch area is evacuated for propellant loading.

Range Controllers will report to console and start watching over range instrumentation such as radars and communication assets while also maintaining a clear launch hazard area.

Propellant loading operations start four and a half hours prior to the opening of the launch window, beginning with the setup of ground systems on the Liquid Hydrogen side that will be pressurized and chilled down. Transfer lines will be chilled down prior to fuel tank chilldown on the Common Booster Core and Delta Cryogenic Second Stage. The -253°C LH2 will start flowing into the first stage about four hours and 10 minutes ahead of launch.

LOX systems setup and chilldown operations start a short time later before the -183°C oxidizer begins flowing into the tanks of the rocket, initially starting in slow fill until the initial portion of the tank is filled so that fast fill can begin until topping is reached.

The Delta Cryogenic Second Stage measures 5 meters in diameter and 12.2 meters in length also using LOX and LH2 propellants to power its RL-10B-2 engine that provides 110 Kilonewtons of thrust. As part of fueling, the DCSS will be loaded with 27,220kg of LOX and LH2.

While fueling is in progress, the launch vehicle will be put through communications and telemetry checkouts and command receiver-decoder testing. At T-50 minutes, the RS-68A engine of the launcher will go through Engine Spin Start Pressurization and a Gimbal Steering Check. Around that time, the launch team will make an inspection for any ice build-up following tanking.

Just before reaching the T-4-Minute Hold, teams complete final preparations for the automated sequence and arm the launch pad ordnances. During the hold, the final GO/No GO Polls are performed by the launch team.

Once clocks start ticking again, Delta IV transfers to internal power and the Safe and Arm Switches are being armed for liftoff. Three minutes ahead of launch, the LOX and LH2 Tanks of the launcher are being secured at flight level. Second stage securing starts one minute later. In addition, the hydraulic system of the vehicle will be checked one final time at this point. At T-50 seconds, all tanks will be at flight level and all ground support equipment will be secured. 45 seconds before T-0, the Launch Enable Command is sent.

At T-25 seconds, the Solid Rocket Motors go through a Thrust Vector Control System Check and the Launch Vehicle Pyrotechnics are armed 10 seconds later. 14 seconds ahead of liftoff, the Radially Outward Firing Initiators are activated to burn any residual Hydrogen during the ignition sequence. The Terminal Countdown Sequencer assumes control of the countdown at T-8.5 seconds and at T-5.5 seconds, the RS-68A opens its main Hydrogen Valve followed by the LOX Valve at T-2 seconds to go to Full Thrust.

Continuing powered ascent on the RS-68A engine of the first stage alone, Delta IV will keep on racing downrange on its way uphill, headed to an elliptical parking orbit. Fairing separation occurs a little over three minutes after launch, splitting open the fairing halves and rotating them outward before separation to ensure both halves cleanly depart the vehicle that will be flying through the rarefied layers of the atmosphere by that point where thrust on the RS-68A increases to 363 metric ton-force. The Common Booster Core will burn until close to T+4 minutes followed by stage separation six seconds thereafter.

This first long firing of the DCSS will place the stack into an elliptical transfer orbit with an apogee around 1,100 Kilometers in altitude. Next will be a coast phase to allow the second stage to climb all the way to apogee for the circularization burn to set up for spacecraft separation around 90 minutes after launch into an orbit of around 1,080 by 1,100 Kilometers.

The Delta Cryogenic Second Stage will conduct a retrograde deorbit maneuver to set up a destructive re-entry over the Indian Ocean for impact in an area south of Australia.

Pending the successful launch of NROL-45, satellite trackers around the world will spring into action to observe the satellite in orbit and get a fix on its orbital parameters and monitor it entering the FIA Radar constellation over the coming weeks and months. Ted Molczan issued TLE Search Elements for Wednesday’s launch here.