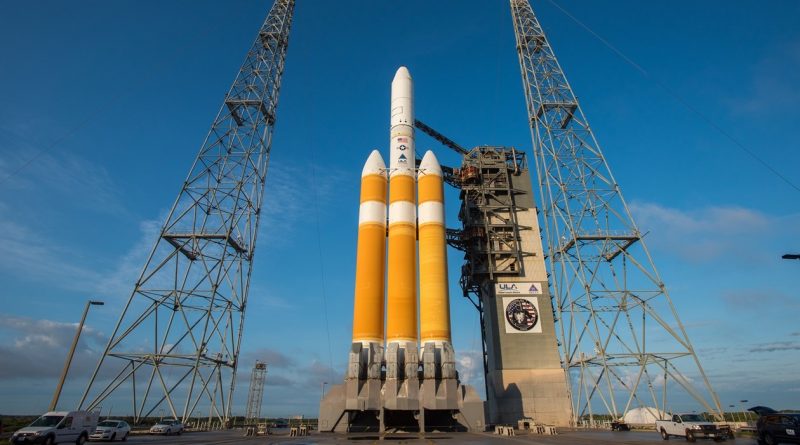 Thursday’s Delta IV launch attempt with the classified NROL-37 satellite was scrubbed after an extended countdown due to uncooperative weather conditions on Florida’s Space Coast, not providing a lucky gap in clouds teams had hoped for throughout the day.

Heading into the lengthy launch countdown with a 40% chance of acceptable weather, the Delta IV rocket was revealed on its pad at L-7 hours when the large Mobile Service Gantry was retracted from the rocket. A series of close out operations followed and Delta IV completed power-up operations before pressing into the three-hour fueling sequence.

Tanking was by the book as 633 metric tons of supercold Liquid Oxygen and Liquid Hydrogen were pumped into the three Common Booster Cores and the Delta Cryogenic Upper Stage. By the time Delta IV was fully fueled, a dense cloud cover had moved over Cape Canaveral and thunderstorms were pushing in from the west.


Odds of favorable weather dropped to only 10%, but with a fully-fueled vehicle, the launch team decided to push into the launch window. Delta IV is aiming for a direct insertion into Geostationary Orbit, creating a long launch window of just under four hours – plenty of time for a lucky gap to form in the weather pattern.

However, teams could only sit and watch as different weather rules cycled back and forth between RED and GREEN including the flight-thru precipitation, anvil clouds, disturbed weather and surface electric field rules. Delta IV received a number of showers while standing on its pad and the Launch Team had to complete a series of re-tests at regular intervals to keep the rocket in a launch posture, in readiness for a quick liftoff in case of a clearing.

Though that clearing never arrived and a scrub was called after the team took the countdown all the way to T-1 minute to protect a launch opportunity at the end of the window.

After the scrub was called, the Launch Team headed into de-tanking of the rocket, placing it back in a safe configuration to await its next launch attempt.

Delta IV Heavy will make a new attempt on Saturday.

Weather odds for Saturday’s attempt are somewhat more optimistic, showing a 60% chance of favorable conditions during the long launch window with primary concerns identified as cumulus clouds and lighting. This is due to a boundary lingering over Central Florida and causing storms to develop inland and migrate eastward to the launch site.

On Saturday, the boundary may move further south, providing the Cape with slightly better conditions and an occasional gap in cloud cover to permit the launch.

NROL-37 has been identified with a high-degree of certainty as the seventh Advanced Orion satellite – a large signals intelligence bird deploying a huge mesh antenna approaching 100 meters in diameter to intercept missile telemetry from foreign territories as well as other electronic communications.