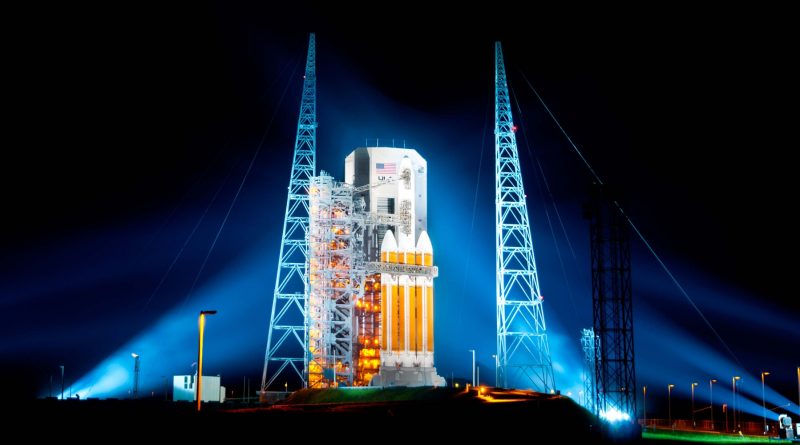 America’s largest rocket is set for liftoff on Thursday with a clandestine satellite for the U.S. National Reconnaissance Office.

The Delta IV Heavy rocket is set for liftoff from Cape Canaveral at 17:59 UTC, turning eastward to deliver its hush-hush payload directly into a Geostationary Orbit in a mission lasting several hours.

The United Launch Alliance Delta IV Heavy currently holds the rank of America’s biggest rocket, a status it will lose when SpaceX debuts its Falcon Heavy rocket later this year or early in 2017. Delta IV Heavy is called up when massive satellites need a ride into orbit or payloads are aiming for particularly high-energy deliveries. So far, the rocket conducted eight missions, the most recent being NASA’s Orion Exploration Flight Test in 2014 that took the Orion capsule twice around the planet for a shakedown mission ahead of crewed flights.


The identity of the NRO’s satellites is kept secret, though the nature of the payloads is usually well known prior to launch based on the type of launch vehicle and launch site as well as navigational warnings that indicate where the satellites are headed. After launch, a worldwide network of satellite trackers typically finds and monitors the satellites and their activities, providing more information on their tasks.

NROL-37 can be identified with a high-degree of certainty as the seventh Advanced Orion satellite – a large signals intelligence bird deploying a huge mesh antenna approaching 100 meters in diameter to intercept missile telemetry from foreign territories as well as other electronic communications.

Delta IV Heavy – capable of launching 6,750 Kilograms directly into Geosynchronous Orbit – will be tasked with a direct GEO insertion on Thursday. Typically, satellites ride into elliptical transfer orbits atop their launch vehicle before circularizing their orbit using onboard propulsion systems. NROL-37 will rely on the Delta IV rocket to lift it directly into an orbit 35,800 Kilometers in altitude, where it appears stationary in the sky and constantly views the same sector of Earth.

What position in GEO NROL-37 will eventually take is unknown – it may replace an aging satellite within the constellation or enter a new slot to expand coverage over areas that are of interest to the NSA and other intelligence agencies that process the data delivered by the satellites.

Delta IV Heavy sports three Common Booster Cores strapped together with a Cryogenic Upper Stage sitting atop the central core. The rocket stands 70.7 meters tall, spans 15 meters and has a launch mass of 733,400 Kilograms, lifted by a trio of RS-68A engines, one on each core.

Meteorologists are not particularly optimistic about Thursday’s launch, issuing a 60% chance of weather getting into the way due to a frontal boundary lingering in Central Florida, creating a risk of showers and storms. The placement of the boundary will determine where storms initiate, however, storm motion is expected to be eastward.

The best conditions are expected at the opening of the classified launch window as thunderstorms become more widespread later in the day. Primary concerns for Thursday’s opportunity are cumulus clouds, anvil clouds, lightning and surface electric fields.

No information on the duration of the launch window is released for NRO launches, though ULA noted earlier that the launch period ends at 22:30 UTC, but that time does not represent the end of the actual launch window.

A backup launch slot is available on Saturday because SpaceX booked the range on Friday. Weather will improve slightly, to a 60% chance of acceptable conditions as the boundary continues to linger over the area.

For Delta IV, this is the 32nd launch and the 9th in the Heavy configuration.

Because of its pricey nature, Delta IV is looking at an early retirement as United Launch Alliance expects to retire single-stick Delta IV Medium vehicles by early 2019 in favor of the company’s new Vulcan rocket, eventually replacing Delta IV and Atlas V.

To ensure continued access to space for National Security payloads, Delta IV Heavy will be kept operational into the 2020s by building up an inventory of cores prior to shutting down the assembly line. DIV Heavy currently has prospects for another six missions, though more may be added to the manifest, depending on the NRO’s needs.