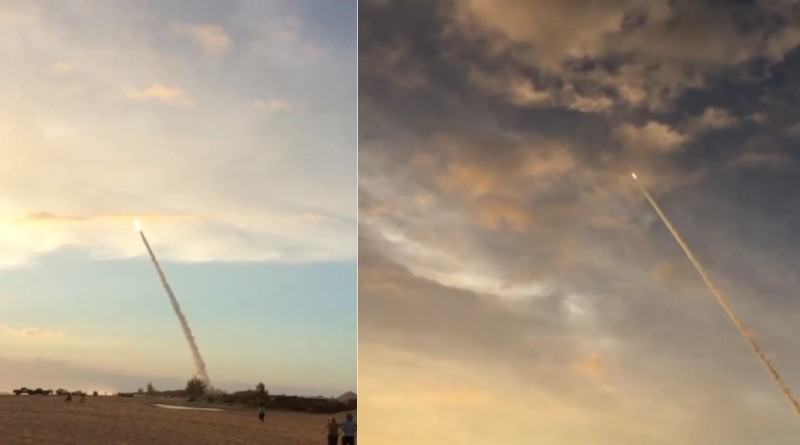 Conducting its premiere launch, a Super Strypi rocket streaked into the afternoon skies over the island of Kauai, Hawaii on Tuesday in a long-awaited demonstration mission. Shortly after the rocket’s liftoff its flight pattern became erratic as the spin-stabilized launch vehicle appeared to enter an uncontrollable swaying motion that increased in rate before video of the launch cut out. Spectator videos appear to show an in-flight break up less than one minute after liftoff.

The United Sates Air Force has confirmed the failure of the ORS-4 mission shortly after lifting off.

The Super Strypi projects builds on the original Strypi sounding rocket design that was inaugurated in 1962 for the launch of nuclear test packages and scientific payloads on sub-orbital flights for testing outside Earth’s atmosphere. In its design, the Super Strypi builds on a simplified architecture – featuring three solid-fueled rocket motors and using a rail launch system. Initially guided by a rail that sets the rocket on its proper heading, the Super Strypi uses spin-stabilization for the duration of its first stage flight, cutting the expense and possible complications of developing a complex guidance system.


Revamping the old Strypi design of the Sandia National Lab, the ORS office signed a contract with Aerojet-Rocketdyne to build the three solid-fueled rocket stages of the vehicle, closely sticking to the specifications of the old design but using modern materials and manufacturing techniques. The Hawaii Spaceflight Laboratory is the prime contractor of the ORS-4 mission that continues efforts to explore new ways of cutting the cost of military space missions, primarily focused on small satellites and quick-response launchers.

Leading up to its highly-anticipated launch, Super Strypi came with a price tag of $45 million including the development and first production unit of the rocket. Future missions are anticipated to cost $15 million, but what comes next for Super Strypi is still unknown. Originally, the vehicle was to be handed from military operation to a commercial launch provider to offer Super Strypi’s services on the commercial market alongside its role in military missions, but as of late there are no firm plans for the vehicle.

It was a long and treacherous road to the maiden flight of the Super Strypi, hit by a number of delays that pushed the ORS-4 mission from an original 2013 launch target into 2015. A ground test of the rocket’s LEO-46 first stage revealed a potentially hazardous condition where insulation material lining the motor case was burned. This burn-through condition did not compromise the motor case and would be easy to fix in future production units, however, the LEO-46 for the ORS-4 mission had already been built and used the design susceptible to the burn-through. This additional risk to an already risky mission as the first flight of a new rocket design had to be accepted by all involved parties after a thorough review.

After this issue was closed out, Super Strypi had to wait for an opening in a very busy schedule of activities at the Pacific Missile Range. Set for October 29, the launch encountered another multi-day delay due to last-minute processing issues. Final clearances from senior officials were finally given on Monday and a Tuesday launch target was firmed up for the Super Strypi.

Standing around 19 meters tall with a mass of over 28 metric tons, the Super Strypi was suspended on a 40-meter rail sitting on an actuating mount that permits the rocket to be pointed to the correct launch azimuth and elevation angle.

Working through countdown operations on Tuesday, teams had to push the planned T-0 time twice due to Range-related issues, one causing a last-minute countdown hold.

Ignition of the powerful LEO-46 motor occurred at 03:45 UTC on Wednesday, 5:45 p.m. local time on Tuesday, and Super Strypi shot off with an initial thrust to weight ratio greater than four. Generating a thrust of 136,000 Kilogram-force, the LEO-46 motor quickly accelerated the vehicle that was tracked by long-range cameras as it made its ascent. Onboard video showed a good initial ascent as the vehicle began to spin, making use of four canted tail fins to stabilize the vehicle on the initial course set by the rail launcher. Employing spin stabilization, Super Strypi rotated 2.5 times per second as it headed uphill.

The first half of the burn of the LEO-46 first stage appeared to go well. Around 45 seconds into the mission, body rates began building up. Seemingly entering a coning motion, the rocket continued building up body rates appearing to be beyond the control of the vehicle’s stabilization system. The video feed was cut after telemetry screens showed the launch vehicle in a wild tumbling motion.

Videos published by spectators show an energetic event taking place around 58 seconds into the mission – either the result of a structural break-up caused by forces acting on the vehicle or actions of the rocket’s Flight Termination System.

The U.S. Air Force acknowledged the failure, but did not provide any additional details.

Measuring 12.2 meters in length and 1.32 meters in diameter, the first stage was planned to consume over 20 metric tons of propellants during its burn lasting 73 seconds. Heading towards a high-inclination orbit, Super Strypi departed Hawaii to the south, leaving the Barking Sands launch site.

In between the first and second stage burns, the vehicle was to enter a short coast phase to gain altitude. A de-spin maneuver was to be performed and the protective payload fairing was expected to separate along with the spent first stage. Next up was the LEO-7 rocket motor, holding 3,350kg of propellant used to deliver an average thrust of 15,600 Kilogram-force to push the vehicle a little closer to orbit. For the second and third stage burns, the Super Strypi was equipped with a cold-gas reaction control system to govern its orientation and ensure the vehicle pointed to the correct direction for the rocket burns.

A coast phase was planned at the end of the second stage burn to enable the vehicle to climb uphill so that the third stage could sufficiently raise the perigee of the trajectory and put the craft into the target orbit. LEO-1 is the name of the rocket’s third stage that was to complete a 40-second burn, delivering a thrust of 3,100 Kilogram-force and finish the task of lofting the vehicle to orbit.

The ORS-4 mission was aiming for an orbit of 415 by 490 Kilometers at an inclination of 94.7 degrees for the separation of the 13 satellites around 13 minutes after liftoff.

The main payload of the ORS-4 mission, HiakaSat, was to begin a mission demonstrating a satellite platform developed at Hawaii University for future application in research, technical demonstration and operational space missions.

Weighing in at 55 Kilograms, HiakaSat is outfitted with a Space Ultra-Compact Hyper-Spectral Imager as its main payload to test out miniaturized remote sensing technology in the operational space environment as well as two cameras sensitive to visible and infrared radiation that could find future use in military and scientific missions.

Eight of the CubeSats to be released in close succession were belonging to NASA’s Edison Demonstration of Smallsat Networks that aimed complete an ambitious demonstration of cross-links between satellites for the transfer of mission data which could simplify the way large constellations of small satellites are operated. The EDSN satellites carried a Geiger-Müller tube to record the space radiation environment as part of multi-point observations only possible with small inexpensive satellites, taking a different approach than the typical large-satellite missions which are not capable of making simultaneous measurements at different locations.

PrintSat is a 1U CubeSat fully constructed by 3D printing. It carried different sensors to track the response of the additive manufacturing material to the extreme environment in space. A 2U CubeSat, Argus, included equipment to examine the effect of space radiation on modern electronics in order to deliver the foundation for new models of radiation-related dynamics in space missions.

Supernova Beta was a prototype 6U CubeSat, testing various satellite bus systems developed by Pumpkin Inc. as part of their commercial line of satellite platforms. Finally, STACEM was a 3U CubeSat sponsored by the National Reconnaissance Office and developed by Utah State University’s Space Dynamics Laboratory for a demonstration of new small optical sensors for remote sensing in different wavelength ranges.

Beyond this first test mission, Super Strypi was looking to an uncertain future. Air Force officials have not confirmed any further Super Strypi flights which would have to take on a number of competitors as there currently are a number of light-lift launch vehicles in development for the commercial and military sectors. A recent report by the Government Accountability Office noted that none of the responsive launch programs operated by the U.S. military is in a position where it could move from a development stage to an operational production.

To produce a long-term solution in the responsive launch sector, the U.S. government will have to select one of at least a handful responsive launch programs currently being pursued by different military agencies. The ORS office sees Super Strypi as a good candidate to become a dedicated launcher for small satellite missions at an affordable cost, though only time will tell if Super Strypi will leap off its pad ever again.