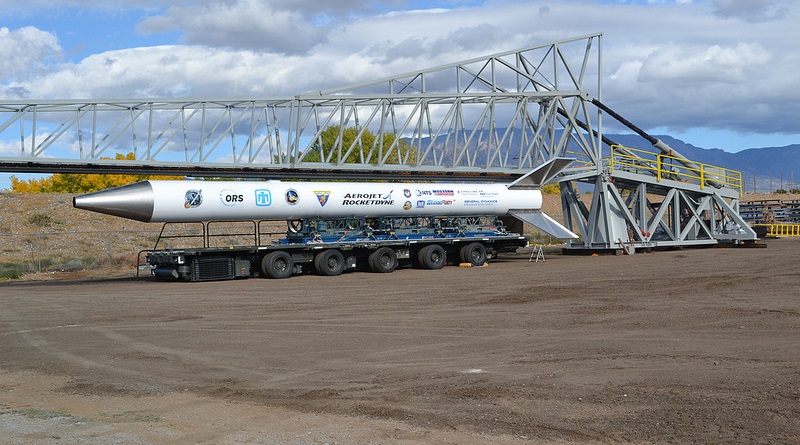 Super Strypi has been cleared for liftoff in the overnight hours on Tuesday on the ORS-4 mission for the Operationally Responsive Space Office, carrying a group of 13 satellites to orbit. The exact launch time is not being revealed in advance given the semi-secret nature of this military-operated launch. The launch period, stretching four hours, begins at 23 UTC on Tuesday with a planned mission duration from liftoff to orbital insertion around 13 minutes.

Final processing of the Super Strypi rocket for its test flight from Hawaii keep dragging on as the mission’s launch date remains unclear. Becoming the first orbital launch from Hawaii, the ORS-4 mission was originally planned for last Thursday but a hold-up in processing caused the launch to slip. Information published by the mission’s operators indicated a liftoff set for Monday night, but the mission’s status has since been changed again to ‘TBD.’

The test flight of the rail-guided SPARK / Super Strypi launcher from the U.S. Navy’s Pacific Missile Range Facility will carry into orbit 13 satellites and demonstrate the Super Strypi launch vehicle design as a dedicated rocket for small satellite launches.

Super Strypi in its design is largely based on the original Strypi sounding rocket designed in the 1960s to boost scientific packages or nuclear weapon test payloads out of the atmosphere. The rocket makes use of three solid-fueled stages and features a simplified design that utilizes a rail to guide the rocket on its initial heading followed by spin stabilization used throughout first stage flight to eliminate the need for a complex attitude control system. Super Strypi can deliver payloads of up to 275 Kilograms to a Low Earth Orbit.


The mission is managed by the Operationally Responsive Space Office and is therefore known as ORS-4, coming in a series of missions dedicated to the exploration of rocket and satellite technologies to reduce the cost and time needed for the preparation of space launches. ORS primarily uses small satellites to establish a quick-response tactical space-based capability, also utilizing rockets that could be launched on need.

Super Strypi consists of three solid rocket motors supplied by Aerojet Rocketdyne and stands approximately 18 meters tall with a diameter of 1.32 meters and a launch mass around 25 metric tons.

The first stage motor, known as LEO-46, generates a total thrust of 136,000 Kilogram-force. Initially rising on its rail-launcher, the rocket is guided to its desired launch azimuth that can be set by physically rotating the truss-mounted rail. Outfitted with four tail fins, the first stage is spin-stabilized unlike other rockets that employ guidance and attitude control systems to keep them on target. Spinning at 2.5 revolutions per second, the first stage will boost the vehicle out of the atmosphere, burning for 73 seconds.

A cold gas attitude control system is mounted on the upper stage of the rocket to point the vehicle to the correct direction for the burn of its second stage, LEO-7, and third stage that is known as LEO-1. In a coast phase between the first and second stage burns, the rocket conducts a de-spin maneuver and sheds its protective payload fairing. Providing 15,600 Kilogram force of thrust, the second stage fires for around one minute, followed by a 40-second burn of the LEO-1 third stage that delivers a thrust of 3,100 Kilogram-force to finish the job of delivering the satellites to orbit.

Super Strypi had a particularly long road to its rail-based launch pad. Development was started in 2010 with the intention of flying the first mission in 2013, but the project fell behind schedule due to technical challenges. Aerojet Rocketdyne test fired the LEO-7 motor in 2012 and the LEO-1 third stage in 2013 followed by LEO-46 in 2014 to test each motor once before flying the integrated launch vehicle.

The ORS-4 launch was pushed from a January 2015 target when an issue on the rocket’s first stage was discovered after the 2014 static test firing. The test motor showed a burn-through of insulation lining the case, however, the first stage of the first Super Strypi had already been built to the specifications found to be susceptible to this burn-through condition.

The issue could be easily fixed on new production motors, but the existing LEO-46 for the ORS-4 mission could not be repaired. A risk assessment was conducted and all parties agreed to accept the added risk to this mission and go ahead with the first stage as is. This decision was made because the burn-through on the test motor did not compromise the motor case itself. The highest risk of burn-through occurs in the closing seconds of the first stage burn.

Being cleared for launch, Super Strypi had to await a clearing in the range schedule at the Pacific Missile Range where a number of activities have to be coordinated. Given a launch slot in late October, Super Strypi headed into final assembly and testing and received its payload stack beginning in late September.

Liftoff was set for October 29, local time, but that date came and went with no launch. Payload operators were informed that the launch switched to its second window on the 30th.

Air Force officials stated that launch processing issues were responsible for the hold-up of the mission. The Hawaii Spaceflight Lab informed on its website that the launch had been re-aligned for November 2nd at some point between 12 and 7 p.m. local time. An update issued on Sunday showed the launch date as TBD, indicating that the mission slipped from its overnight launch target, though official announcements regarding this secretive flight are hard to come by.

Blasting off from Hawaii, Super Strypi will aim for an orbit of 415 by 490 Kilometers at an inclination of 94.7 degrees for the separation of its 13 payloads around 12 minutes into the flight.

The payload package of the ORS-4 mission consists of a main satellite, HiakaSat, and a dozen CubeSats of different sizes. Weighing in at 55 Kilograms, HiakaSat – built by students at Hawaii University – aims to demonstrate a satellite bus capable of facilitating various payloads, providing a cost-effective in-orbit platform for technology demonstrations, research missions and operational applications. The satellite is outfitted with a compact hyperspectral imager, two color cameras and other technical demonstrations.

Eight of the CubeSats make up NASA’s swarm of EDSN satellites, the Edison Demonstration of SmallSat Networks – a technical demonstration of inter-satellite communications and in-space networking. Deploying a loose formation of small satellites provides scientific opportunities not possible with conventional single-satellite missions involving only one set of instruments. With a number of satellites, multiple instruments can be deployed to different locations in space, enabling multi-point measurements which can come in handy when studying space weather which is what the EDSN constellation will accomplish in addition to showing that inter-satellite communications can simplify the operation of a large number of small satellites.

The other CubeSats aboard this mission are Argus, a 2U CubeSat to collect data on the effect of space radiation on modern electronics, Printsat – a fully 3D printed satellite conducting an in-space demonstration of the 3D printing material, Supernova Beta – a prototype 6U CubeSat from Pumpkin Inc, and STACEM – a 3U CubeSat demonstrating a miniaturized multi-spectral imaging payload.

>>>Overview of the ORS-4 Payload