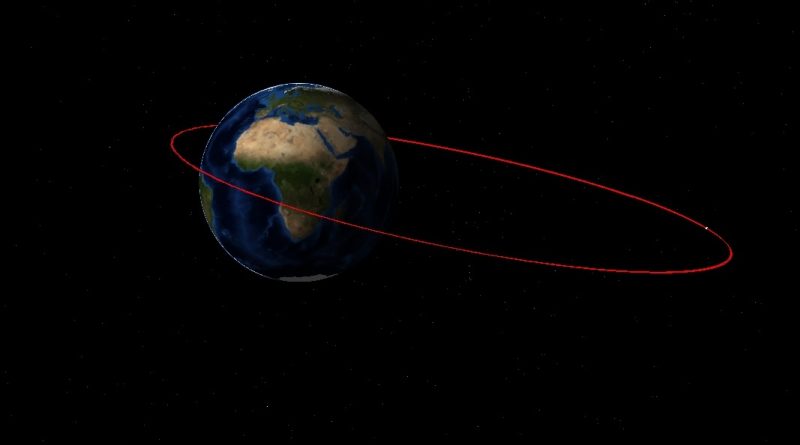 The classified NROL-61 satellite launched atop an Atlas V rocket on Thursday was spotted in its secret orbit within hours of its takeoff from Florida’s Space Coast.

Atlas V lifted off from Space Launch Complex 41 at the opening of its launch window at 12:37 UTC, 8:37 a.m. local time, departing the Space Coast to the east-south-east under the loud thunder of its RD-180 engine and two Solid Rocket Boosters that helped the 59-meter tall rocket accelerate. The rocket pushed through Mach 1 just 49 seconds after liftoff and the twin boosters continued burning until T+94 seconds, separating from the vehicle 35 seconds later.

The Russian-built RD-180 engine finished its burn four minutes and nine seconds into the flight followed six seconds later by the separation of the spent Common Core Booster, handing off to the Centaur Upper Stage that ignited its 10,800 Kilogram-force RL-10C engine. Payload fairing separation occurred just after T+4.5 minutes and Atlas V headed into a pre-arranged News Blackout – standard for missions of the National Reconnaissance Office.


Despite the mission heading into a shroud of secrecy, the ascent profile could be gleaned from the launch trajectory to the south-east and the re-entry area for the Centaur upper stage identified in the Pacific Ocean after one lap around Earth. The first Centaur burn had a duration of approximately 11 minutes, lifting the stack into a slightly elliptical orbit peaking over 800 Kilometers at the standard 28-degree inclination for Cape launches.

A second burn was performed centered on the equator to position the apogee of the injection orbit over the equator as well, easing the process of maneuvering the satellite into its operational Geostationary Orbit. The second burn, around four minutes in duration, was set up to raise the apogee of the orbit to over 35,700 Kilometers and reduce the inclination of the orbit for spacecraft separation around 45 minutes after liftoff.

As with all NRO launches, the last to be heard of the satellite was a confirmation that NROL-61, now re-named USA 269, reached its planned orbit. No other information on the mission will be shared with the public, but a worldwide network of satellite trackers was ready to spot the newly launched spacecraft and monitor its move to Geostationary Orbit to see from where within the operational NRO fleet the satellite will operate.

Paul Camilleri, based in Australia, tracked the NROL-61 satellite and the Centaur upper stage from 13:47 to 15:54 UTC, observing the Centaur shortly after it performed its deorbit maneuver to set up for re-entry over the Pacific Ocean eight hours after liftoff.

Satellite tracking expert Cees Bassa used the imagery provided by Camilleri to calculate the orbits for NROL-61 and Centaur, showing the payload in an orbit of 843 by 35,739 Kilometers inclined 18.9 degrees and Centaur on a sub-orbital arc of -252 by 28,014 Kilometers, headed for destructive re-entry over the expected area.

These observations confirm that Atlas V was carrying a single satellite, ruling out the possibility of a dual-payload launch that had emerged prior to launch due to the use of the Extra-Extended Payload Fairing on the Atlas V, offering additional payload volume. It was the first NRO mission to launch on an Atlas V 421.

Based on the performance of Atlas V 421 and the orbital parameters calculated for NROL-61, the satellite’s mass can be estimated at slightly over five metric tons.

NROL-61 most probably is a new model of Satellite Data System satellite inaugurating the fourth generation in the multi-decade program.

Given the type of launch vehicle and payload fairing, the 4th generation of SDS likely features larger and heavier satellites than the previous third generation, expanding capabilities to respond to a growing demand for secure space-to-ground communications.