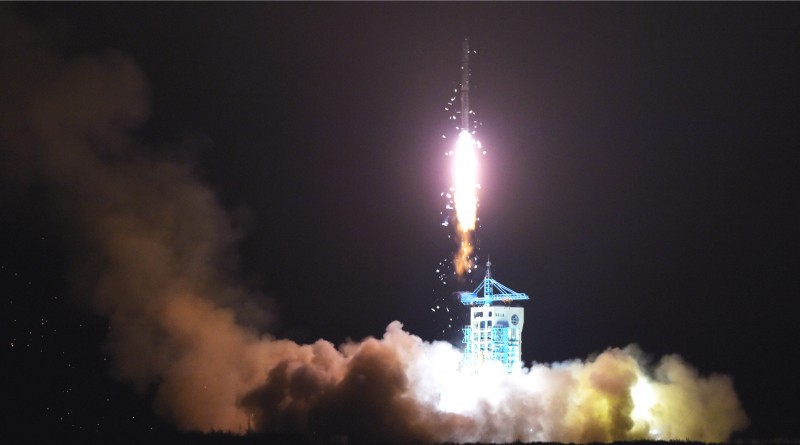 China conducted a surprise launch on Thursday, lifting the Yaogan-29 reconnaissance satellite into orbit. According to official Chinese media, the Long March 4C rocket carrying the satellite blasted off from the Taiyuan Satellite Launch Center at 5:24 a.m. local time on Friday, 21:24 UTC on Thursday. Officials declared the launch a success after the satellite was successfully released into its target orbit.

Thursday’s launch from China’s prime military launch site marked the second Yaogan launch in less than three weeks and the third of the year in a program that sees a rapid launch rate to keep the Yaogan satellite constellation in operation. Yaogan is China’s primary reconnaissance program operated in Low Earth Orbit and comprised of optical imaging and radar satellites as well as electronic intelligence satellites.

Chinese officials insist the Yaogan program is used for experiments, land surveys, crop yield estimates and disaster monitoring, but the consensus among outside observers is that Yaogan is a military program conducting reconnaissance on a global scale. This conclusion is based on information released by Chinese sources, the observed structure of the satellite constellation and its high launch rate that by far surpasses any of the civilian satellite programs.

Yaogan was inaugurated in April 2006 when the first Synthetic Aperture Radar satellite was sent into orbit. This spacecraft was joined by the first optical satellite in May 2007, marking the start of a steady launch rate and progressive upgrades of the satellites to increase their capabilities.

Three satellites of the first generation of radar spacecraft were launched between 2006 and 2010 (Yaogan 1, 3, 10) while the same period saw four launches of satellites carrying first generation optical payloads (2, 4, 7, 11) followed by another 1st generation satellite in 2014 (Yaogan 24). These satellites were deployed to orbits 630 Kilometers in altitude at an inclination of 97.9°.

Yaogan 9 brought another addition to the program – a triplet of satellites flying in a precisely maintained formation in an orbit of 1,080 by 1,100 Kilometers inclined 63.4° – resembling the architecture of the Naval Ocean Surveillance System operated by the United States for electronic intelligence. Using three satellites in a precise formation allows them to intercept radio signals from the ground and calculate and track the position of ships in the world’s oceans. A total of five Yaogan triplet launches have taken place to date (9, 16, 17, 20, 25).

Yaogan 14 launched in 2012 and entered a unique position in the optical segment of the constellation, showing the lowest operational orbit at 475 Kilometers. This satellite’s replacement, Yaogan 28, was launched earlier this month.

There were no prior hints of an impending launch from Taiyuan as has become common in China’s military space program.

As per the usual procedure, no information was released regarding the identity of the Yaogan 29 satellite. Orbital data is expected in the overnight hours on Thursday to identify the satellite by its operational orbit. Long March 4C has previously been used to launch optical satellites of the Yaogan-8 and 14 class as well as Yaogan ELINT triplets.

The Long march 4C Launch Vehicle that was used for the Yaogan-29 launch is part of China’s flight proven Long March Rocket family. It is derived from the CZ-4B Launcher, but features a re-startable upper stage and can accommodate a larger Payload Fairing. It is operated from the Jiuquan and Taiyuan Satellite Launch Centers.

CZ-4C has a liftoff mass of 250,000 Kilograms and is 45.8 meters in length with a diameter of 3.35 meters. It features several improvements over the CZ-4B such as new telemetry, tracking, control, and self-destruction systems that are smaller in size. The first stage of the vehicle is powered by a YF-21B Rocket Engine which consists of a cluster of four YF-20B Engines each providing 814 Kilonewtons of Vacuum Thrust.