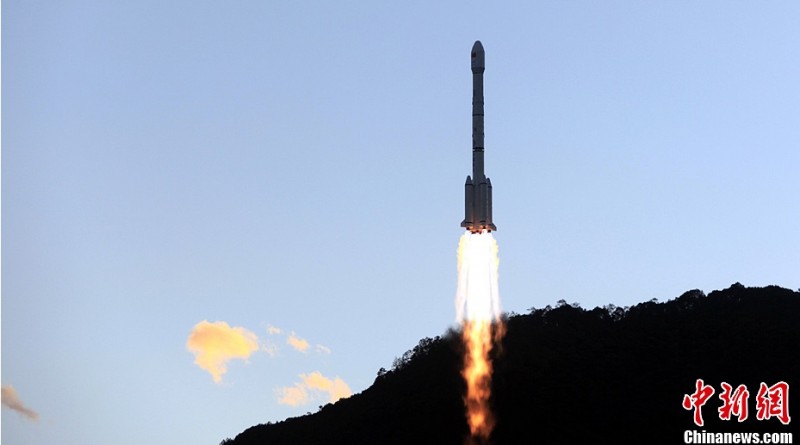 China was back in action on Tuesday, launching a Long March 3B rocket to deliver the next Beidou-3 navigation satellite to orbit in the ongoing deployment of China’s Global Satellite Navigation System.

Long March 3B blasted off from the Xichang Satellite Launch Center around 23:15 UTC, swinging to a south-easterly path to begin traveling towards a Geosynchronous Transfer Orbit for the delivery of the second of three IGSO satellites in the Beidou-3 constellation. Confirmation of mission success was provided by official Chinese media about 90 minutes after liftoff.

The Chinese have stepped up their pace of launches, as was the expectation in a typical pattern of only a handful Chinese space launches in the first half of the year before the pace ramps up with launches every couple of days. This month, China conducted five orbital launches including the debut flights of the new Long March 6 and 11 rockets marking the first vehicle inaugurations in China’s new line of rockets to be established in the coming years.


Beidou-3 represents the third phase in China’s Navigation Satellite System that finds its roots back in 1983 when the first proposals were made and saw its first launch in 2000 when the first generation of experimental satellites began deployment to Geostationary Orbit. Placing three satellites into a Geostationary Orbit with visibility of China offered navigation services limited to the Chinese the territory with an accuracy around 20 meters. To expand this system to the Asia-Pacific Region, Beidou-2 was inaugurated in 2009, using five satellites in Geostationary Orbit, five in inclined Geosynchronous Orbits (plus one test satellite) and a number of Medium Earth Orbit satellites. Beidou-2 delivered services to a larger area and achieved a higher accuracy than the first generation of satellites.

The third and final stage of establishing a space-based navigation architecture is the expansion to a continuous global coverage at very high accuracy by using satellites deployed to different orbits.

Known as Beidou-3, the finished constellation will be comprised of 27 Beidou-3M satellites, each weighing about 1,000 Kilograms, in Medium Earth Orbit, five Beidou-3G satellites in Geostationary orbit and three Beidou-3I satellites in inclined Geosynchronous orbits. This constellation is expected to reach its fully operational capability by 2020 launching the larger Beidou-3G and 3I satellites one at a time and lofting pairs or quadruplets of Beidou-3M satellites atop the Long March 3B and, once operational, the Long March 5.

The Radio Navigation Satellite Service operates in a similar way as the Galileo, GPS, Glonass and IRNSS navigation systems – sending coded signals in the L-Band frequency with ultra high timing precision so that receivers on the ground can process three or four different signals in order to calculate the user’s precise position, elevation and speed. The Medium Earth Orbit Satellites only carry the RNSS payload.

Three Beidou-3 satellites have been launched to date – the first IGSO satellite launched in March and a pair of MEO satellites entered orbit in July.

The first IGSO satellite launched as part of Beidou-3 used a Long March 3C rocket with Yuanzheng-1 upper stage while this mission also lofted an IGSO bird but upgraded to the CZ-3B, leaving out the upper stage. This arises due to the fact that the Beidou-3 craft have two different manufacturers, the China Academy of Sciences and the China Academy of Space Technology.

The different approaches used become evident in the launch schemes  and launch vehicles that are required to cater to the satellite’s mass and propulsive abilities. Satellites of one manufacturer require an upper stage to be used to deliver them to their operational orbits since they do not host a main propulsion system while the other satellite type is capable of maneuvering from a transfer orbit to an operational orbit by themselves.

Lifting off from Xichang at 23:15 UTC, the 56.3-meter rocket weighing 456 metric tons completed a short vertical ascent before aligning itself with a south-easterly trajectory, taking it over the Yunnan, Guizhou and Guangxi provinces, the Gulf of Tonkin, Hainan Island and out over the Pacific Ocean. Liftoff took place just ten minutes after the local sunrise at the Xichang Satellite Launch Center.

Assuming control of the flight, the third stage was to ignite its YF-75 dual engine cluster that, unlike the other CZ-3B stages, burns Liquid Oxygen and Liquid Hydrogen. Generating 157 Kilonewtons of thrust, the third stage was to burn through 18,200 Kilograms of cryogenics over the course of one or two burns to raise the apogee of the orbit close to Geosynchronous altitude and adjust the orbital inclination.

Confirmation of mission success came around 90 minutes after launch when the condition of the satellite after its launch could be verified.