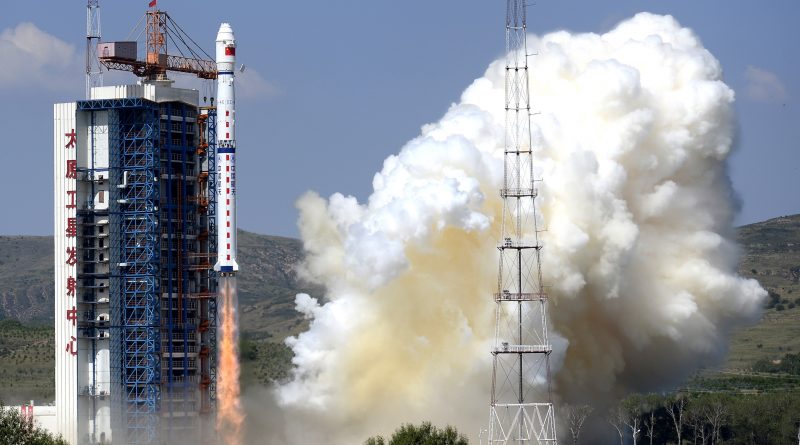 Picking up the launch pace, China launched a Long March 4C rocket from the Taiyuan Satellite Launch Center at 22:55 UTC on Tuesday, carrying the Gaofen-3 remote sensing satellite to orbit.

The launch follows up on last Friday’s successful Long March 3B mission out of Xichang, lifting China’s first mobile communications satellite into orbit. As has been the case in the past several years, China has outlined a busy second half for 2016 with around a dozen launches remaining on the schedule for the remainder of this year.

With a packed schedule for the rest of the year, the Jiuquan Satellite Launch Center in the Gobi desert will be a particularly busy place for the coming three months with a multitude of missions expected to take off from the inland launch base, around 1,600 Kilometers from China’s capital Beijing.


Coming up in mid-August is the launch of the Quantum Science Satellite to complete an ambitious demonstration of quantum communications that may build the foundation for future secure communications technology. Also on the Jiuquan manifest is the launch of TanSat, China’s first dedicated mission for the measurement of Carbon Dioxide and its involvement in climate change.

Set for mid-September is the launch of Tiangong-2, the second Chinese space laboratory that succeeds the Tiangong-1 mission and continues in the country’s aspirations of establishing a regular human presence in Low Earth Orbit with the ultimate goal of building a modular space station toward the end of the decade.

Pending the successful launch of Tiangong-2, two crew members will embark on a long-duration mission to the space lab aboard the Shenzhou-11 spacecraft, aiming for a mission duration of approximately 30 days.

Last week, the train with the Long March 2F rockets to be employed by Tiangong-2 and Shenzhou-11 made its way from Beijing to Jiuquan to ring in the final preparations phase for China’s first human spaceflight endeavor in over three years.

Also set to occur before the end of the year is the maiden launch of China’s new Long March 5 heavy-lift rocket from the Wenchang Satellite Launch Center, following up on the successful inauguration of Long March 7 as China establishes its next generation of orbital launch vehicles.

The Gaofen satellite series premiered in 2013 and is part of the High-Resolution Earth Observation System CHEOS that had originally included plans for seven satellites to create a constellation of spacecraft readily providing data products from a variety of sensors to establish an operational Earth observation capability similar to that of the American Landsat and European Copernicus programs.

CHEOS satellites are equipped with a variety of sensors from high resolution, multispectral optical imagers to radar payloads, infrared imagers and microwave payloads as well as specific sensors. Satellites belonging to CHEOS are operated in different orbits including Low Earth Orbit and Geostationary Orbit to create a range of data products at different qualities and revisit times.

Gaofen-3 is the sixth Gaofen satellite to be launched, equipped with a high-resolution Synthetic Aperture Radar payload. The 2,950-Kilogram satellite is based on the CS-L3000B satellite bus developed by the Chinese Academy of Space Technology (CAST) with high-stability and high-agility attitude control systems employing a combination of Control Moment Gyros and Momentum Wheels.

The development of the Gaofen-3 mission started in late 2010 with first engineering hardware built in 2013. The flight unit finished assembly in May ahead of final testing and shipment to Jiuquan.

Set for a primary mission of eight years, Gaofen-3 is outfitted with a multi-polarized C-band Synthetic Aperture Radar (SAR) capable of all-day, all-weather imaging at a ground resolution better than one meter. The instrument features a deployable, multi-panel SAR antenna covering a ground swath of 10 to 650 Kilometers depending on which of 12 available imaging modes is used. The primary user of Gaofen-3 data is the State Oceanic Administration.

The first Gaofen satellite was launched on April 26, 2013 based on the compact CAST-2000 Satellite bus, hosting a 400-Kilogram imaging payload consisting of two High Resolution Cameras and four Wide Field Imagers. Gaofen-1 can deliver imagery with a swath width of 69 Kilometers using its two high-resolution payloads that achieve a ground resolution of up to two meters in the panchromatic band and eight meters for multispectral images. The Wide Field Imager reaches a 16-meter resolution but creates images of a broad swath of 830 Kilometers, covering four spectral bands.

Gaofen-4 was launched in December 2015 and is the first in the series to operate from Geostationary Orbit – employing a staring camera to deliver imagery at a resolution of 50 meters with an imaging area of 7000 by 7000 Kilometers consisting of 400 by 400km frames. This satellite will provide real-time imagery at high temporal resolution.

The Gaofen-5 satellite is currently expected to launch in 2017 carrying six payloads that include a hyperspectral camera covering visible and shortwave infrared wavelengths, a spectral imager, a greenhouse gas monitoring payload and an infrared detector, a trace gas spectrometer and a multi-angle polarization detector. Gaofen-6 will be a copy of Gaofen-1 to replace it in 2017, at the end of its planned in-orbit life. Further down the road, Gaofen-7 will fly a hyper-spectral stereo imaging payload currently penciled in for launch no earlier than 2018.

CZ-4C has a liftoff mass of 250,000 Kilograms and is 45.8 meters in length with a diameter of 3.35 meters. It features several improvements over the CZ-4B such as new telemetry, tracking, control, and self-destruction systems that are smaller in size. The first stage of the vehicle is powered by a YF-21B Rocket Engine which consists of a cluster of four YF-20B Engines each providing 814 Kilonewtons of Vacuum Thrust