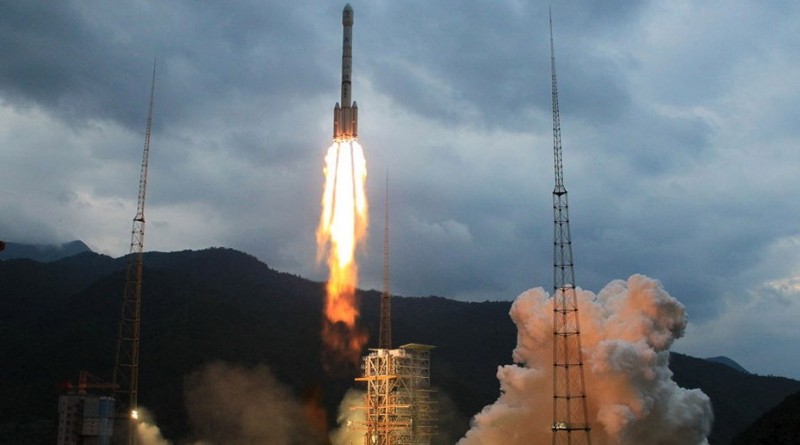 China’s year opening space launch took place on Monday from the Xichang Satellite Launch Center when a heavy-lift Long March 3C rocket blasted off on a multi-hour mission to deliver the next Beidou-3 navigation satellite to orbit to become part of the Chinese pendant to the American Global Positioning System or Europe’s Galileo Satellite Navigation System.

Liftoff occurred just after 7:30 UTC Monday morning, according to local reports of shaking windows and photos posted to Chinese social media. Confirmation of launch success will be provided after the successful insertion into an orbit over 20,000 Kilometers in altitude, several hours after liftoff.

Monday’s mission – opening what is expected to be a record-setting year for Chinese space flight – marks the last launch of an experimental Beidou-3 navigation satellite in an important step in Phase III of the Beidou program, scheduled for completion by 2020 for operational global navigation coverage. Over two dozen launches from Chinese launch centers are on the books for 2016 including the first missions from the Wenchang Satellite Launch Center, premiering the Long March 5 and Long March 7 launch vehicles. China also plans to launch the Tiangong-2 Space Station module later this year to be followed up with a crewed mission using the Shenzhou spacecraft to visit the miniature space station in China’s continued development efforts aiming to deploy a modular station around the end of the decade.


Beidou-3 is the third phase in China’s Navigation Satellite System that finds its origin in 1983 when the first concepts were submitted. The project had a long road to orbit, seeing its first launch in 2000 when the first generation of Experimental Satellites began deployment to Geostationary Orbit. Consisting of only three Geostationary Satellites, the system offered navigation services for just the Chinese territory, reaching an accuracy of 20 meters. To expand navigation services to the broader Asia-Pacific region, the Beidou-2 series was inaugurated in 2009 comprised of five satellites in Geostationary Orbit, five in inclined Geosynchronous Orbits and four (plus one test satellite) in Medium Earth Orbit. The second phase of the program saw an increase in accuracy and a longer in-orbit life of the satellites.

This step-wise deployment of navigation satellites allowed lessons to be learned and implemented before the final stage of the project – the establishment of a Global Navigation Satellite System combining a number of satellites operating from different orbits. The Beidou-3 satellite constellation will consist of 27 Beidou-3M satellites in Medium Earth Orbit, each weighing 1,014 Kilograms, five 4,600-Kilogram Beidou-3G satellites in Geostationary Orbit and three Beidou-3I satellites in inclined Geosynchronous Orbits each with a mass of  4,200 Kilograms.

The Medium Earth Orbit Satellites carry only the Radio Navigation Satellite Service payload allowing them to be smaller in size. They weigh 1,014 Kilograms and are based on a newly developed satellite bus smaller than the DFH-3 platform, but using a number of DFH-3 heritage components to match its capabilities and reduce risk. The three-axis stabilized satellites accommodate a payload mass of 280 Kilograms and measure 2.25 by 1.0 by 1.22 meters in size. Two deployable solar arrays generate 1,500 Watts of of power.

To loft the Satellites directly into or close to their operational orbit, China developed a multi-purpose upper stage that can perform multiple engine burns over missions of several hours to deliver payloads to a variety of orbits. The Yuanzheng-1 (Expedition-1) upper stage is equipped with its own power, navigation, control and propulsion systems to autonomously perform missions with several burns spaced by extended coast phases.

Using storable propellants, the main engine of the YZ-1 stage delivers 6.5 Kilonewtons of thrust. At least two burns can be supported by the stage. The first to enter an elliptical transfer orbit, the second to circularize the orbit at the desired altitude. The capabilities of this new upper stage can be compared to Russia’s Fregat stage used aboard the Soyuz rocket when delivering payloads to high-energy orbits.

Lifting off from Xichang at around 07:30 UTC on Monday, the 56.3-meter tall Long March 3C Rocket, weighing 368 metric tons, began heading south-east after a short vertical ascent. Under the power of its core stage and two liquid-fueled boosters, the vehicle began racing downrange for a trip over China before heading out over the Pacific Ocean, starting with a total thrust of 458 metric-ton-force.

The twin boosters, each 16.09 meters long and 2.25 meters in diameter holding 41,100 Kilograms of storable propellants, were to burn for two minutes and 20 seconds to deliver 740 Kilonewtons of thrust for the initial flight portion. The vehicle was to continue powered flight on the four-chamber DaFY-6-2 engine of the core stage delivering 2,961 Kilonewtons of thrust. Over a burn of 158 seconds, the 24.76-meter long first stage was to burn through 186,200 Kilograms of hypergolic propellants.

Assuming control of powered flight, the cryogenic third stage, consuming LOX and LH2 propellants, was expected to ignite the YF-75 dual-engine cluster to deliver 16,000 Kilogram-force of thrust to boost the stack into an elliptical orbit.

Immediately after separation from the launch vehicle, the YZ-1 upper stage was to start an engine burn to deliver the stack to an elliptical transfer orbit with an apogee on the order of 22,000 Kilometers. Next was a long coast phase of around three and a half hours to allow the stack to climb up to a position near apogee so that the second burn of the upper stage could serve as a circularization maneuver to reach a circular orbit just over 22,000 Kilometers in altitude, at an inclination of 55 degrees.