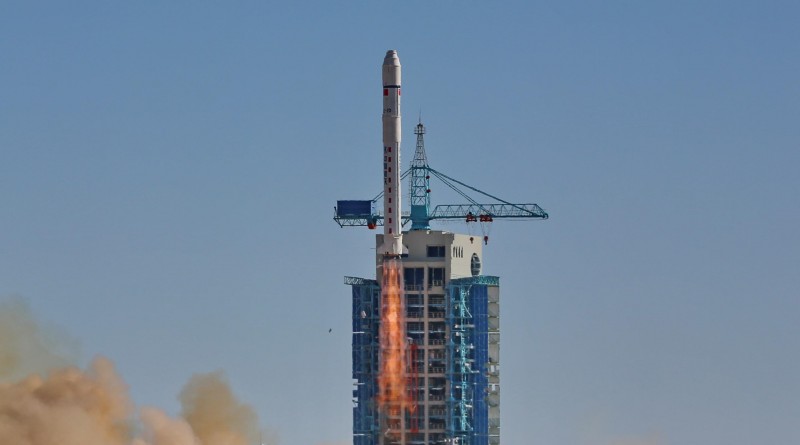 China successfully launched a Long March 2D rocket on Monday, lifting the Tianhui-1C satellite to a Sun Synchronous Orbit. Liftoff from the Jiuquan Satellite Launch Center took place at 7:10 UTC and tracking data later revealed the satellite in an orbit of nearly 500 Kilometers. The Tianhui series of satellites uses stereo-imaging systems for the collection of topographic data.

The first Tianhui-1 satellite was launched in August 2010 as a demonstration mission for the use of a stereo imager to gather topographic data from orbit. Tianhui-1B followed in May 2012 to provide a follow-on capability after the three-year service life of the first satellite.

The Tianhui-1 satellites are built by the Hangtian Dongfanghong Weixing Corporation and the Chinese Academy of Space Technology. They use two three-segment deployable solar arrays for power generation and have precise attitude control and pointing capability. The satellite payload is comprised of a three-dimensional imaging system for the acquisition of stereo imagery and a multi-band camera.


The stereo imager has a field of view of 25 degrees and achieves a ground resolution of five meters. It is sensitive across a wavelength range of 510 to 690 nanometers. The multi-band camera reaches a resolution of ten meters and covers four spectral channels in the blue, green, red and near infrared bands. Both imaging systems are covering a ground swath of 60 Kilometers.

The Tianhui satellite program has been merged with a portion of the Ziyuan Earth Observation program that includes civil and military remote sensing satellites. The Ziyuan-3 branch of the program is dedicated to stereo imaging and was likely combined with the Tianhui-1 satellite series, under operation by the People’s Liberation Army.

Monday’s launch utilized the Long March 2D version of China’s Chang Zheng launch vehicle series, occurring at 7:10:04 UTC. The two previous Tianhui satellites lifted off at precisely the same time. Heading to the south-west, Long March 2D was set for an ascent mission of around ten minutes. Confirmation of launch success was provided by Chinese space officials approximately half an hour after liftoff.

The Tianhui-1C satellite was detected in an orbit of 488 by 496 Kilometers at an inclination of 97.35° – matching the insertion orbits of the previous two satellites.