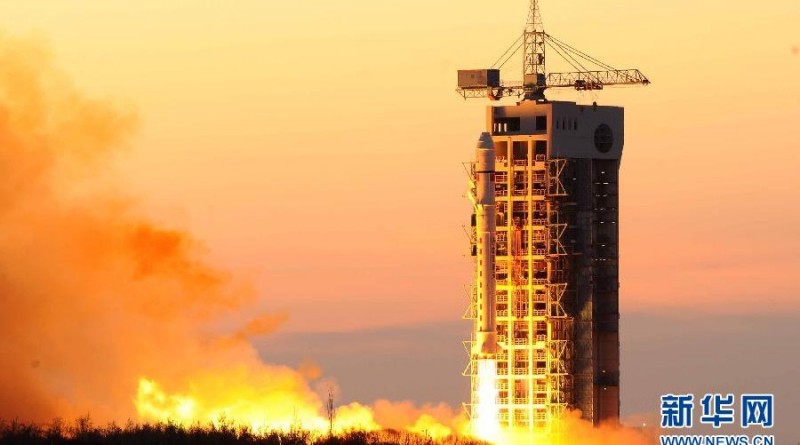 China’s ‘Monkey King’ Dark Matter Particle Explorer blasted off atop a Long March 2D rocket on Thursday, embarking on a mission to join the ongoing efforts of understanding dark matter signatures, filling in the gaps in high-energy astrophysics.

Long March 2D lifted off at 0:12 UTC on Thursday from the Jiuquan Satellite Launch Center and aimed for a 500-Kilometer, 97.4° Sun-Synchronous Orbit. Confirmation of a successful launch was provided by official Chinese media within an hour of the launch.

The Dark Matter Particle Explorer, formerly only known by its acronym DAMPE, was re-named on Wednesday when the winner of a public naming contest was announced. Wukong has been chosen as the name for this mission after Sun Wukong, known as the Monkey King – a classic novel character who acquires supernatural powers – an apt name for a mission that sets out to make unprecedented measurements in the high-energy particle spectrum.


DAMPE can measure the direction, energy and electric charge of particles for the continued search for dark matter. The spacecraft’s instrument represents the deepest particle detector ever deployed to space, meaning it can measure particles at higher energies, complementing and expanding measurements made by the Alpha Magnetic Spectrometer 2 and the Calorimetric Electron Telescope, both installed on the outside of the International Space Station. The instrument surpasses the Alpha Magnetic Spectrometer 2 in terms of detection range for electrons and gamma rays by an order of magnitude.

The 1,900-Kilogram DAMPE spacecraft hosts a powerful telescope featuring a stacked design of Plastic Scintillator Detectors, Silicon Tungsten Trackers, a deep Bismuth-Germanate Calorimeter and a Neutron Detector with a total radiation length of 33.

The objectives of the DAMPE mission are to search for Dark Matter signatures by studying electrons and gamma-rays, to examine the cosmic ray spectrum and to conduct high-energy gamma-ray astronomy. Dark matter is a hypothesized form of matter that is necessary to account for gravitational effects seen in extremely large structures, e.g. anomalies in the rotation of galaxies and gravitational lensing of light by galaxy clusters which can not be explained by the quantity of the observed matter alone.

Furthermore, DAMPE aims to extend the energy range of space-based particle detectors to the Terra-Electronvolt region (up to 10TeV), also providing a higher energy resolution.

DAMPE aims to study dark matter by gamma-rays arising from dark matter annihilation or decay together with measurements of the electron/positron pair spectrum. This, scientists hope, will permit them to constrain the physical parameters of dark matter such as the rest mass, annihilation cross section or lifetime.

A popular dark matter theory proposes that dark matter consists of weakly interacting massive particles – WIMPs – which, when colliding, create an electron-positron pair at energies limited by the mass of the WIMPs. In this scenario, the positron fraction would increase up to a certain point and then rapidly fall when reaching a cutoff energy. So far – with the current set of detectors deployed to space – no such point could be measured with certainty.

The Long March 2D rocket blasted off from the Jiuquan Satellite Launch Center in the Gobi desert half an hour before sunrise, at 8:12 a.m. local time, thundering off under the power of its YF-21C engine that generated a thrust of over 300 metric-ton force. Climbing vertically for the first seconds of the mission, the rocket was to pitch over and align itself with a trajectory taking it almost due south towards its high-inclination orbit.

Burning through over 180 metric tons of propellants, the first stage was to burn just shy of three minutes before handing off to the second stage. Also burning hypergolic propellants, the second stage’s YF-24C main engine, coupled with a vernier thruster, was to deliver 80 metric ton-force of thrust to finish pushing the spacecraft into its target Sun Synchronous Orbit 500 Kilometers in altitude, inclined 97.41°.