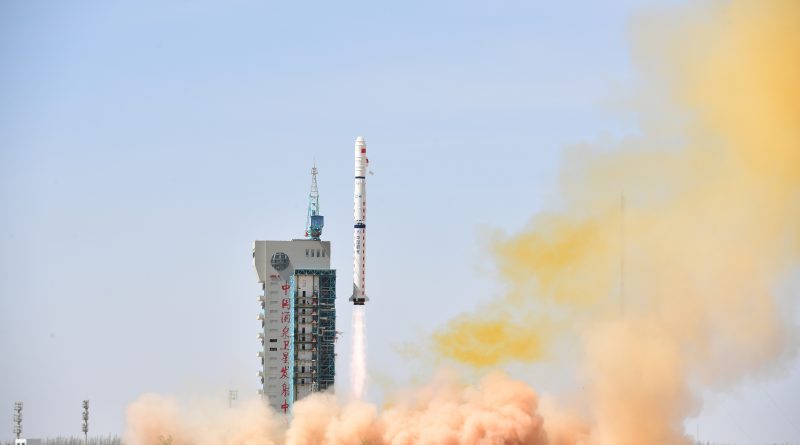 China pulled off a completely secretive space launch on Tuesday, firing into orbit a trio of naval reconnaissance satellites and a small technology test satellite via a Long March 4C rocket. China’s eleventh launch of the year occurred at 4:25 UTC from the Jiuquan Satellite Launch Center in the Gobi Desert and orbital data confirmed the identity of the three Yaogan-31 satellites as a ship-tracking mission in line with previous Yaogan triplet launches.

No information on the launch was available beforehand and airspace closures were particularly cryptic in nature and did not allow them to be tied to space launch activity out of Jiuquan, located in Inner Mongolia. The China Aerospace Science and Technology Group (CASC) announced the success of the launch a little over 90 minutes after liftoff and tracking data showed the Yaogan-31-01 satellite group in an orbit of 1,090 by 1,100 Kilometers at an inclination of 63.4°, consistent with the country’s naval reconnaissance satellite system.

Comprising three members, the Yaogan-31-01 group is officially advertised “for electromagnetic environment surveys and other related technology tests.” However, based on previous missions flying under the Yaogan designation and the orbit shown for the satellites, it is certain their real mission is of a military nature in the field of naval reconnaissance by pin-pointing the location of foreign ships by triangulating their radio emissions.

Yaogan was inaugurated in April 2006 with the launch of the first Synthetic Aperture Radar satellite for all-weather, round-the-clock imaging. The first optical satellite was launched in 2007 and the first triplet launch occurred in 2009 to mark the addition of an electronic-reconnaissance segment to Yaogan.

Flying in precise triangular formations in an orbit of 1,080 by 1,000 Kilometers inclined 63.4°, the Yaogan triplets closely resemble the architecture of the original version of the U.S. Naval Ocean Surveillance System (NOSS). Using three satellites in a precise formation allows them to intercept radio signals from the ground and so calculate and track the position of warships in the world’s oceans while also studying their activity based on their radio emissions.

The hypothesis of the Yaogan Triplets being China’s Naval ELINT program was firmed up in 2012 when the next satellite trio, Yaogan 16, went up into a second orbital plane about 71 degrees west to that of Yaogan 9. Further expanding the constellation, China launched three Yaogan 17 satellites in 2013 into a plane 75 degrees east of Yaogan 9 – creating a fully operational system that closely resembles the pattern of NOSS satellites launched by the United States in 2007, 2011 and 2012, using a 74-degree spacing between planes.

The Yaogan 20 and 25 launches in 2014 lifted their satellites into the orbital planes of Yaogan 9 and 16, likely in an effort to expand the constellation for faster revisit times and to ensure continuity of service should one triplet go out of service. Tuesday’s launch placed its satellites in a quasi-co-planar orbit with Yaogan 17; the reason for this plane being replenished a full four years after the other two is not known.

According to orbital tracking data collected by the Joint Space Operations Center, all Yaogan triplets launched between 2009 and 2014 remain in triangular formation, indicating all remain in operation, spaced in three orbital planes with two active groups per plane.

China’s Yaogan series saw a number of additions in recent months under the Yaogan-30 designation, involving triplet launches of a different nature than the Chinese NOSS-equivalent in that the Yaogan-30 constellation does not employ close formations of satellites and instead spaced its members evenly along their orbital planes to create a rapid-revisit constellation at an inclination of 35 degrees – suspected to be for tactical reconnaissance gathering. Whether Yaogan-30 involves electronic intelligence, optical imaging or a combination of the two remains up for debate.


The designation of Yaogan-31-01 A/B/C for the latest group of satellites lifted into orbit may be an indication that additional Yaogan-31 groups can be expected in the future as China apparently changed its naming convention for multi-satellite systems as evident in the Yaogan-30 program and the recent additions to the civilian Gaofen program.

Tuesday’s launch also carried a micro/nano technology test satellite as a secondary payload; however, no designation has emerged for the small satellite.

Tuesday’s mission was the 271st launch of the Long March rocket family, according to Chinese state media, and the 23rd for the Long March 4C variant. Long March 4C is derived from the CZ-4B Launcher, but features a re-startable upper stage and can accommodate a larger Payload Fairing. It is operated from the Jiuquan and Taiyuan Satellite Launch Centers.