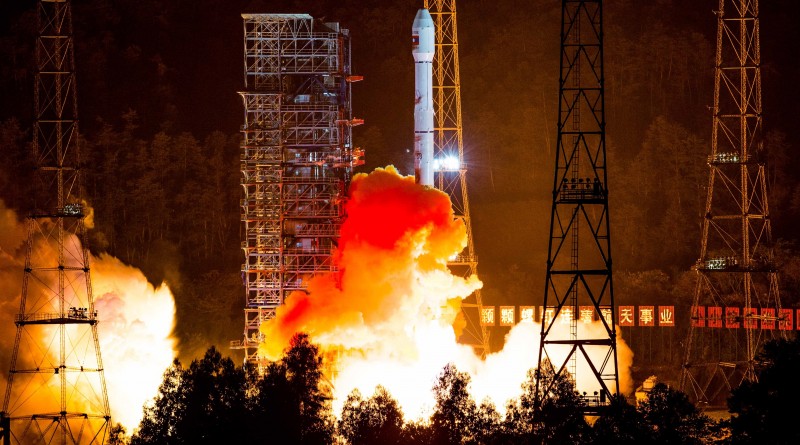 China opened a busy year of space launches on Friday with the successful launch of a Long March 3B rocket carrying the Belintersat-1 communications satellite to Geostationary Transfer Orbit to become the first Belarusian communications satellite. Lifting off from LC3 at the Xichang Satellite Launch Center at 16:57 UTC, Long March 3B conducted a successful ascent mission lasting a little under half an hour to drop the satellite off in its target orbit.

Belintersat-1 is based on the Chinese DFH-4 satellite bus while the communications payload was supplied by Thales Alenia Space, based in Europe. The satellite builds the centerpiece of the National System of Satellite Communication and Broadcast of the Republic of Belarus – an initiative considered to be of innovative, economic, social and political importance for the country. The Belintersat project will deliver a number of services for which great demand exists in Belarus, specifically satellite internet, mobile satellite communications, services for mobile operators, networking solutions for corporate customers and TV broadcasting.


The project has a number of objectives ranging from the operation of a communications satellite to providing modern communications technology and services to remote areas. The Belarusian government awarded the contract for the Belintersat-1 mission to the China Great Wall Industry Corporation that offers Chinese satellites and launch services on the commercial market. Under the contract, the satellite platform would be manufactured by the China Academy of Space Technology (CAST) and launched by a CZ-3B rocket provided by the China Academy of Launch Vehicle Technology (CALT). Responsible for the initial testing and in-orbit commissioning of the satellite is China Satellite Launch & Tracking Control General.

Belintersat-1 will be stationed at 51.5 degrees East in Geostationary Orbit and has a life expectancy of 15 years.

At 16:57:00 UTC, Long March 3B/E ignited its boosters and core stage that soared to a collective liftoff thrust of 604 metric-ton-force. Thundering off four seconds later, the rocket rose from its pad, lighting up the night skies over the Xichang launch base in the Sichuan province in south-western China. After a vertical ascent of a few seconds, the rocket began to pitch and roll onto its planned ascent path, taking it south-east across China before passing over the Pacific Ocean.

While the second stage was firing, Long March 3B departed the dense atmosphere, making it safe to jettison the protective payload fairing and expose the Belintersat-1 satellite for the rest of its ride uphill.

Separation of the Belintersat-1 satellite was expected just after T+26 minutes and was declared a success by Chinese officials.

In the coming days and weeks, the satellite will complete its transfer to Geostationary Orbit and take up station where it will complete in-orbit testing and commissioning before entering operational service for a mission of at least 15 years.