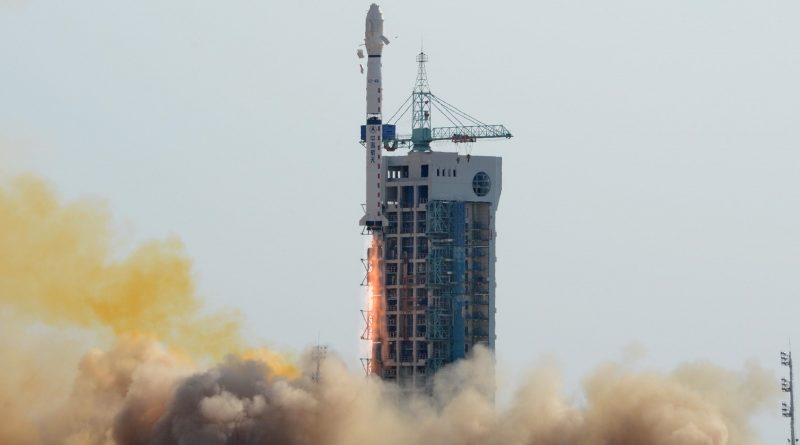 Just four days after demonstrating great openness with live video of the inaugural launch of the Long March 7 rocket, China’s space program fell back into its secretive routine with the launch of a Long March 4B rocket from the Jiuquan Satellite Launch Center.

Long March 4B be lifted off from Jiuquan at 3:21 UTC on Wednesday and was to complete a ten-minute ascent mission to deliver the Shijian 16-02 satellite to orbit.

No prior announcement of the launch had been made as has become standard for China’s military missions. The only advance warning of the launch came in the form of navigational warnings that showed Long March 4B would be flying on an unusual trajectory, towards the south east, aiming for a 75° orbit instead of 63° and SSO inclinations typically targeted from Jiuquan.

The only prior launch to this type of orbit in recent years was the first Shijian-16 mission lifted by a CZ-4B rocket in October 2013 – suggesting Wednesday’s launch lifted a follow-on payload into orbit, as was later confirmed by the official designation of the satellite. The satellites are suspected to be used for Electronic Intelligence-gathering from Low Earth Orbit.

According to Chinese space officials, the Shijian program (=Practice) is dedicated to a number of applications including scientific experiments and technology demonstrations. For some Shijian missions, details on the satellites’ payloads are openly communicated to the public while other missions keep their payloads secret, likely when military or intelligence-gathering technologies are involved.

Over the years, a large number Shijian satellites headed into a variety of orbits to test out new satellite technology such as power-generation, thermal control and electric propulsion as well as innovative payloads including optical and infrared imagers, space awareness sensors and science experiments.

The program was initiated back in 1971 with the launch of Shijian-1 by a Long March 1 rocket, becoming China’s second satellite to be launched. SJ-1 was outfitted with a very basic payload of a Geiger-Müller counter placed into orbit to study the radiation in near-Earth space.

Shijian 2, 2A and 2B were three separate satellites equipped with payloads dedicated to scientific research and technology demonstrations. The three satellites were launched aboard a single rocket in 1979 and demonstrated deployable solar arrays, chemical thrusters, C-Band tracking and new thermal control systems while the 2A satellite also studied electron abundance in the ionosphere and Shijian 2B featured a deployable balloon on a long wire to serve as a radar target.

Shijian-4 was orbited in 1991 and carried six payloads to study radiation in near-Earth space in a highly elliptical orbit. The Shijian-5 satellite of the China Academy of Sciences demonstrated a new miniature satellite bus and carried 11 payloads for space radiation and microgravity studies.

Four pairs of satellites launched under the SJ-6 designation between 2004 and 2010 officially employed sensors to measure the space environment and demonstrated new technology, though western analysis determined the satellite were most likely a demonstration of Electronic Intelligence technology.

Shijian-7, a single satellite, was orbited in 2005 and outfitted with an advanced Earth imager, likely testing out an infrared camera.

The Shijian-8 mission in 2006 was a short-duration flight of a re-entry capsule to perform a number of biology experiments that were returned to Earth after a two-week stay in the microgravity environment for detailed study by scientists.

This concept was expanded to include experiments from vastly different branches of science covering fluid physics, thermodynamics, in-space combustion, space radiation. microbiology, and chemistry on the Shijian-10 follow-on mission. Shijian-10 – with a larger re-entry vehicle – flew for two weeks in April 2016, collecting a wealth of science data with international participation in its onboard experiments.

Lifted to orbit in 2012 were SJ-9A/B, a pair of satellites dedicated to the demonstration of electric propulsion,  improved stabilization and control platforms, an advanced power generation and storage system, and new thermal control technology. The vehicles also carried Earth Observation payloads.

Shijian-11 – inaugurated in 2009 turned into a satellite series of its own with eight launches to date, suggesting that this satellite type transitioned from an experimental status during its first flight to a more operational character in subsequent missions. The likely purpose of the satellite system is suspected to be related to Missile Tracking and Early Warning.

SJ-12 flew in 2010 to complete a mission reportedly dedicated to scientific research and technological demonstrations including inter-satellite measurements and orbital maneuvering and rendezvous exercises with other Shijian spacecraft in orbit.

Shijian-13 will be the program’s first Geostationary Satellite, currently expected to launch in 2017 and SJ-14 is also still to be launched. The Shijian-15 satellite headed into orbit in 2013 and is reportedly carrying a space debris sensors.

The first Shijian-16 satellite was found in a a circular orbit 600 Kilometers in altitude, inclined 75° – an inclination not used by any Chinese space mission before.

Its operational orbit led observers to believe that SJ-16 might be the replacement of the Shijian-6 series which saw four satellite pairs launched in 2004, 06, 08 and 2010 entering 600-Kilometer sun-synchronous orbits.

Orbital data released for Wednesday’s launch shows SJ-16-02 in an orbit of 595 x 616 Kilometers inclined 75.0°, closely matching the initial orbit of SJ-16-01 with an offset in orbital planes of around 90 degrees, as expected when building a satellite constellation optimized for coverage.

With a second satellite now in orbit, the SJ-16 indeed appears to follow some operational objective, likely as the replacement of the SJ-6 electronic intelligence satellites. If so, more launches could be expected in the coming years at a cadence of one launch every two or three years.

The launch vehicle is 45.8 meters in length and 3.35 meters in diameter. It has a launch mass of 249,200 Kilograms. The Long March 4B is based on the CZ-4 Family of launch vehicles and was developed by the Shanghai Academy of Space Flight Technology. Development of the Launcher began in 1989 and the CZ-4B completed its maiden flight on May 10, 1999 with the Fengyun 1C Weather Satellite.

All three stages of the vehicle use Unsymmetrical Dimethylhydrazine and Nitrogen Tetroxide as propellants. The first stage uses a YF-21B engine with four YF-20B thrust chamber motors providing a total liftoff thrust of 2,961 Kilonewtons. The first stage is 24.66 meters in length and holds 183,200 Kilograms of Propellants. First Stage burn time is 170 seconds.

The second stage is 10.41 meters long and has a fueled mass of 39,600 Kilograms. It is powered by a YF-24F main engine and a YF-23F gimballing vernier thruster for attitude control. The stage burns for 127 seconds (vernier burn time is 137 seconds) before shutting down and separating from the third stage.

The upper stage of the Long March 4B launch vehicle is 1.92 meters long and has a reduced diameter of 2.9 meters. It has an empty mass of 1,000 Kilograms and holds 14,200 Kilograms of propellants. It is powered by a YF-40 Main Engine that provides 98 Kilonewtons of thrust. The third stage supports burns of up to 303 seconds to inject the payloads into their desired orbit.