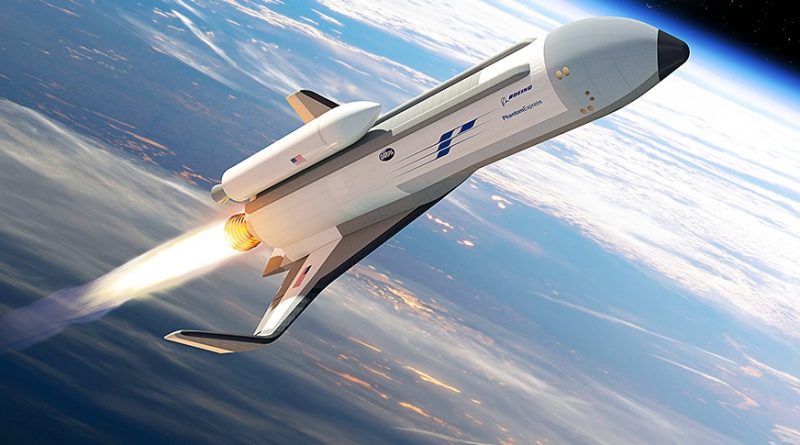 Boeing and DARPA announced on Wednesday that the two would jointly invest in the Phantom Express Project to debut an entirely new class of hypersonic aircraft that could be suitable for commercial satellite launches and find application in the military as a quick-response launcher that could be called upon for short-notice, low-cost access to space. The overall goal of the program is to create an aircraft-like access to space, procuring a launch vehicle for a satellite in a period of days – a process that currently takes months and years of preparation.


“Phantom Express is designed to disrupt and transform the satellite launch process as we know it today, creating a new, on-demand space-launch capability that can be achieved more affordably and with less risk,” said Darryl Davis, president of Boeing Phantom Works.

The Phantom Express vehicle comprises two major components – the rocket-powered space plane that takes off powered by a single liquid-fueled engine and delivers an expendable upper stage to the edge of space with sufficient velocity for the upper stage to reach orbit after firing its engine. The 30.5-meter long space plane will be powered by a single AR-22 reusable cryogenic rocket engine built by Aerojet Rocketdyne based on the legacy Space Shuttle Main Engine.

Boeing says the Phantom Express launch system would be capable of placing a satellite of 1,361 Kilograms (3,000lbs) into Low Earth Orbit.

The size of a small business jet, Phantom Express has a wing span of 19 meters and would take off vertically like a conventional rocket, accelerate to hypersonic speed, dispatch the upper stage and re-enter the atmosphere for an autonomous landing on a runway.


“The XS-1 would be neither a traditional airplane nor a conventional launch vehicle but rather a combination of the two, with the goal of lowering launch costs by a factor of ten and replacing today’s frustratingly long wait time with launch on demand,” said Jess Sponable, DARPA program manager.

Refurbishment in between flights will be kept to a minimum to allow the vehicle to be returned to a vertical launch position, outfitted with a new upper stage and filled with propellants for re-flight within a day, potentially within hours. DARPA and Boeing are planning a flight test demonstration of ten flights in ten days.

XS-1 is aiming for a recurring cost of as little as $5 million per flight including the cost of the expendable upper stage, provided a flight rate of at least ten missions per year. Launch prices for commercial missions would be determined by market forces, DARPA says. In terms of performance, XS-1 is comparable with the Minotaur IV rocket that comes at a cost in excess of $50 million.

The XS-1 program was announced in November 2013 after decades of failed attempts to develop a similar architecture at vastly different scales. These attempts included the X-30 single-stage-to-orbit and passenger vehicle proposed by Rockwell in the 1980s based on scramjet engine technology, Lockheed’s X-33 VentureStar intended Shuttle replacement with a proposed payload capability of 20 metric tons, and, most recently, DARPA’s RASCAL program that aimed at placing a 140kg satellite into orbit for less than $1 million.

Three companies received contracts in July 2014 to complete preliminary design work as part of Phase 1 of the program. Boeing and Masten Space Systems advanced into Phase 1B in 2015 and received additional funds to refine their designs.

Phase 2 of the Project calls for the design, construction, and testing of the technology demonstration vehicle through 2019. DARPA and Boeing plan a series of ten hold-down firings on the ground over a ten-day period to demonstrate propulsion readiness for the proposed missions. Objectives for Phase 3 include 12 to 15 flight tests in 2020 with longer gaps in between for systems and engineering validation before taking on the 10 flights in 10 days challenge – at first without payloads and top speeds of Mach 5 before stepping up to Mach 10 and sending an upper stage with a satellite of 400 to 1,350 Kilograms into Low Earth Orbit.


“To achieve these goals, XS-1 designers plan to take advantage of technologies and support systems that have enhanced the reliability and fast turnaround of military aircraft,” DARPA said in a press release. The agency also said XS-1 would incorporate previously developed technology from DARPA, NASA, and the Air Force.

“DARPA intends to release selected data from its Phase 2/3 tests and will provide to all interested commercial entities the relevant specs for potential payloads,” DARPA said with regard to commercial operation of the vehicle.

Aerojet Rocketdyne announced the company will build two AR-22 engines with legacy Shuttle flight experience to be assembled from parts that remained in both Aerojet Rocketdyne and NASA inventories from early RS-25 versions. Assembly and ground testing of the engines will be completed at the Stennis Space Center in Mississippi.

RS-25 is a flight-proven engine design that, over a three-decade service history, kept an impeccable performance record with only one major in-flight event. However, in the Shuttle days, RS-25 engines went through costly refurbishment between each flight which will not be possible for Phantom Express and its ambitious target flight rate.

AR-22 is a staged combustion engine with two separate preburners that drive separate high-pressure turbopumps delivering Liquid Oxygen oxidizer and Liquid Hydrogen fuel received from independent low-pressure turbopumps to the main combustion chamber which employs regenerative cooling provided by fuel circulation through the chamber and nozzle wall. Becoming one of the most-tested and best understood pieces of rocket propulsion, the Shuttle-era RS-25 went through a number of modifications, improvements and re-certifications over its three-decade operational life with Shuttle.

Overall, RS-25 delivers 1,860 Kilonewtons of thrust at sea level increasing to 2,279kN in vacuum (at the 109% power level used by NASA’s SLS); the engine can actively throttle from 67% to 111 or even 115% of rated performance in contingency scenarios. The engine achieves a specific impulse of 366 seconds at sea level and 453 seconds in vacuum, operating at a chamber pressure of 206.4 bar.  RS-25 stands 4.3 meters tall and is 2.4 meters in diameter with a dry mass of 3.5 metric tons.