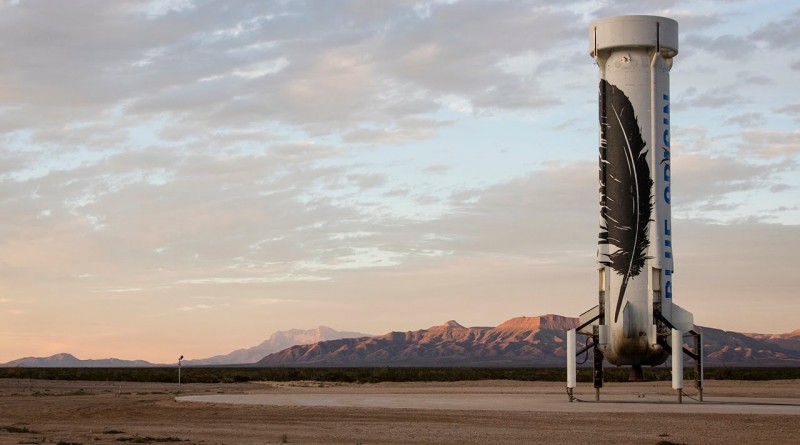 Blue Origin’s New Shepard rocket conducted its second successful test flight on Monday and managed to stick the landing after ascending to an altitude of 100 Kilometers and making a controlled return to the ground in the company’s continued efforts of developing a re-usable sub-orbital launch vehicle for crewed and scientific applications.

Long gone are the days where rocket boosters were only used once before finding their final resting place in the Ocean downrange from their launch pads. Progress made in technology and the prospects of great savings pursued a number of launch providers to look into reusability concepts. Embedding reusability into rocket systems is being explored at different levels by a number of companies – ranging from component reusability focused on rocket engines in development by United Launch Alliance, sub-orbital rocket stage re-usability developed by Blue Origin, and SpaceX’s aspirations of reusing orbital rocket stages.

Though SpaceX made tremendous progress in the field of reusability, the company’s Falcon 9 has yet to stick the landing after returning from the edge of space and a speed over ten times the speed of sound.

Not as daunting as returning an orbital launch vehicle stage, Blue Origin aims lower – launching its New Shepard vehicle straight up to an altitude of 100 Kilometers, peaking at a speed of Mach 4 before shutting down its engines to provide crew members aboard the Crew Capsule with four minutes of weightlessness before parachuting back to Earth.

Separated from the Crew Module after the propulsive ascent, the New Shepard vehicle has been designed to fall back towards the ground guided by forward fins and slowed down by air brakes, re-light its engine and maneuver to a concrete pad for a pin-point landing on deployable legs.

New Shepard, named in reference to America’s first astronaut in space, Alan Shepard, made its first developmental test flight in April 2015 after sub-scale versions of the vehicle were flown beginning in 2006. In parallel to rocket testing, the secretive company developed its Crew Capsule that provides around 15 cubic meters of volume and is fully certified to fly humans to the edge of space with a full-envelope launch escape system that completed its first tests in 2012. New Shepard’s BE-3 main engine finished acceptance testing by April and Blue Origin received the final permits needed to begin its multi-year test program consisting of sub-orbital launches from their West Texas launch site.

The test performed in late April achieved a successful flight to 93.5 Kilometers in altitude followed by a smooth descent and landing of the Crew Module. However, the Propulsion Module experienced a loss of hydraulic pressure during its descent and could not stand the landing. After the test flight, the company said an improved hydraulics system was already being developed and would be ready for launch aboard all subsequent Propulsion Modules.

New Shepard lifted off from its Texas launch site at 11:21 a.m. local time on Monday, climbing under the loud thunder of its 50,000-Kilogram-force BE-3 engine, guzzling down cryogenic propellants to push the vehicle to the edge of space. After a divert maneuver, New Shepard headed straight up, successfully achieving an apogee of 100.5 Kilometers and a top speed of Mach 3.72.

The Crew Module made a clean separation, opened its drogue chutes followed by its three blue-and-orange main chutes for a gentle descent to the ground and a landing cushioned by soft landing engines. All eyes, however, were on the Propulsion Module as it accelerated on its way down from the tenuous upper atmosphere, deploying its eight drag brakes and actuated fins to find its way back to the launch site, battling high-altitude crosswinds.

At an altitude of 1.49 Kilometers, New Shepard re-ignited its BE-3 engine for the controlled landing burn – involving heavy throttling on the engine and gimbaling to keep the booster on track through the use of thrust vector control. Keeping the vehicle upright and slowing it down for a comfortable landing, the BE-3 engine was throttled up as the vehicle closed in on the ground, deploying its legs in the last moments of flight and touching down at a speed of 7 Kilometers per hour. The engine shut down and the booster came to rest on its four landing legs, achieving a fully successful flight.

Greeted by elated Blue Origin engineers, the New Shepard booster will not get much rest as the company is eager to demonstrate the successful re-use of the vehicle by flying again in the not too distant future.

While exploring its sub-orbital business in Texas, Blue Origin has agreed to take over Space Launch Complex 36 at Cape Canaveral Air Force Station for the company’s orbital launch vehicle – a two-stage rocket sporting the more powerful BE-4 engine consuming a combination of Liquid Natural Gas and Liquid Oxygen.