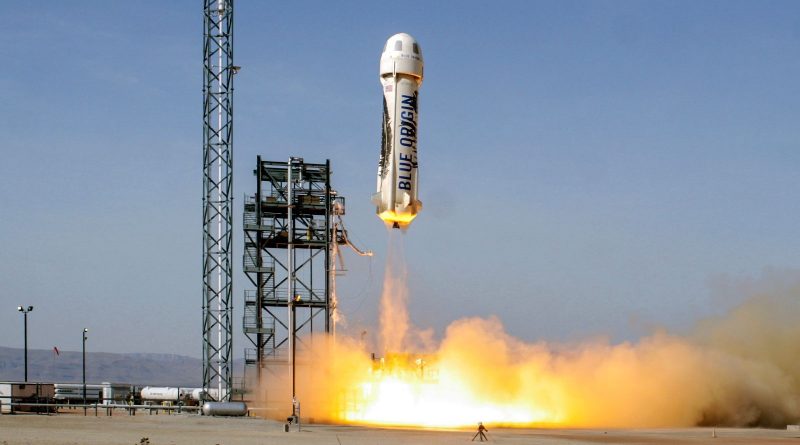 Blue Origin plans to conduct a critical launch abort test with its suborbital New Shepard rocket on Wednesday to take the vehicle one step closer to beginning crewed test flights.

The company announced in September the test would be performed in early October with October 4 as an initial target. However, an unfavorable weather forecast for the Van Horn test site led to a delay to Wednesday.

A planned launch time was not given due to natural fluidity in the vehicle’s countdown sequence. The live webcast of the test begins at 14:45 UTC.

In its initial stages, the flight of the New Shepard booster and its Crew Capsule will look like the previous test missions, however, 45 seconds into the climb, a powerful abort motor within the Crew Capsule will be fired to demonstrate a crew could be transported to safety in the event of a major problem during the most stressful segment of the flight.

So far, Blue Origin conducted five high-altitude flights with the New Shepard – four demonstrated the nominal mission scenario while the most recent flight in June tested whether the Crew Capsule can land safely with one of its three parachutes disabled.

Blue Origin founder Jeff Bezos warned that Wednesday’s flight may not be survivable by the NS-2 Booster.

It was never designed to withstand the environment created in the abort, specifically the immense thrust of the Crew Capsule hitting it followed by a rapid and significant change in the aerodynamic environment with the booster now directly exposed to the air flow.

There is a small chance the booster can survive and land safely, in which case it will be rewarded with a retirement party and placed in a museum, Bezos wrote in an update.

Blue Origin uses a pusher-type design for its escape system featuring a solid-fueled Escape Motor that can deliver 31.5-metric tons of thrust over a two-second burn to push the capsule away from the booster and move it out of harms way. This system is fundamentally different than the ‘classical’ Launch Abort Systems used on the Mercury and Apollo Programs as well as the Russian Soyuz, China’s Shenzhou and NASA’s Orion – all of which employ escape towers holding the rockets that would pull the capsules away from the failing rocket.

This traditional design, however, requires the escape tower to be jettisoned during a nominal flight because the spacecraft could not re-enter the atmosphere with the tower on top. Expending an escape motor on every flight represents a significant cost factor and adds a critical jettison event to the flight scheme. Therefore, a number of modern spacecraft such as New Shepard, SpaceX’s Dragon 2 and Boeing’s Starliner use pusher systems.

A pusher system requires a fast-acting abort motor and a fail-proof separation system to move the capsule out of any imminent danger in the event of a launch vehicle failure. Also, the system has to be capable of working at all altitudes and speeds encountered during flight.

Blue Origin in 2012 conducted a Pad Abort test that demonstrated the Escape Motor can lift the Crew Capsule to a sufficient altitude (over 700 meters) for it to deploy its parachutes and make a gentle descent and safe landing.

The flight abort test will be a greater challenge as the Crew Capsule has to pull away from the still-firing booster and transition into a controlled descent after going through quite some aerodynamic stress.

Firing up its liquid hydrogen & liquid oxygen-fueled BE-3 engine, New Shepard will lift off from its West Texas launch site with a thrust of 50 metric-ton-force. Accelerating straight up, the vehicle will reach the abort point around 45 seconds into the mission when passing five Kilometers in altitude and traveling at a speed of 240 meters per second.

The test is timed to occur at the most difficult time during ascent – Maximum Dynamic Pressure. Demonstrating a successful escape during the most dynamic region of flight will guarantee an abort in all other flight regimes will be possible as well.

Redundant separation mechanisms will severe the structural connection between the Crew Capsule and Booster with the Escape Engine igniting at the same precise time. The solid-fueled engine will deliver thrust for under two seconds and the capsule will divert from the Boosters path.

The Crew Capsule will break the sound barrier during the Escape Burn and demonstrating good control in this flight environment will be another critical item. Reaching peak altitude – stabilized by its Reaction Control System – the Crew Capsule will enter what is hoped to be a stable descent prior to the deployment of the three drogue chutes followed by the blue-and-orange mains that slow the vehicle for touchdown, further cushioned by Soft Landing Thrusters.

What happens to the New Shepard booster is hard to say as simulations show there is a high probability of destruction in the turbulent airflow but some scenarios see the booster surviving intact. The moment to watch for will be right after separation when the booster’s forward section with its ring fin enter the high-speed airflow.

If the booster can remain intact through the initial disturbance it will be programmed to execute a standard propulsive landing maneuver which would be its fifth. In case the booster suffers damage at separation, it will fall back to the desert floor and meet a spectacular end as most of its propellant will still be on board at the time of the abort.

Blue Origin recently presented its continued development efforts on the company’s New Glenn heavy-lift rocket aiming for liftoff from Cape Canaveral before the end of the decade. Jeff Bezos shared a pair of photos on Twitter showing a wind tunnel model of the launch vehicle, marking the completion of a three-week testing campaign.

The photos show the rocket in its ascent configuration and the descent vehicle with the booster pointing its engines forward as it would do when re-entering the atmosphere en-route to its landing site. The tests were dedicated to serve as validation for computational fluid dynamics modeling performed earlier in the development effort to study the performance of the rocket in dynamic regions of its flight.

The New Glenn vehicle was presented last month, but so far Blue Origin has only shared the physical dimensions of the rocket as well as its basic design including the number of engines in use on the 95-meter tall rocket.