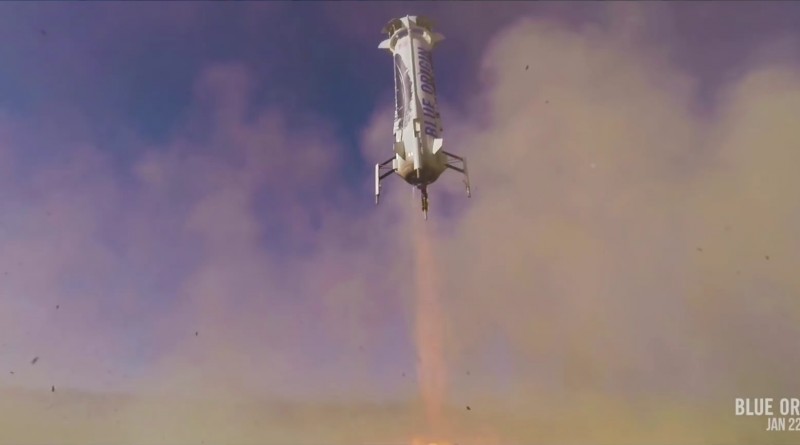 Blue Origin achieved another milestone, successfully flying and landing the company’s New Shepard rocket in an ambitious re-use test, demonstrating both, the New Shepard booster and Blue Origin’s crew capsule, can be re-flown with minimal refurbishment between flights. The test also lays the groundwork for the company’s orbital launch vehicle to premiere in the not too distant future.

The single-stage suborbital rocket was first in action on November 23 when it took its place in history as the first launch vehicle to fly above the edge of space and return in a smooth propulsive landing. The November test followed in the footsteps of a similar test flight last April that saw a successful ascent of the booster and landing of the capsule, but a failed return of the rocket.


The same vehicle that flew in November lifted off again from the West Texas test site on Friday under the power of the Liquid Hydrogen – Liquid Oxygen fueled BE-3 engine. Ascending vertically, the rocket made a small divert maneuver and shut down its engine when reaching a top speed around four times the speed of sound. The rocket reached an apogee of 101.7 Kilometers, again passing the Karman line that is considered to be the boundary of space.

The crew capsule then separated from the booster, falling back to Earth until opening its parachutes for a soft landing, assisted by solid rocket engines. While the capsule used parachutes for its landing, the booster deployed air brakes and forward fins for guidance, homing in on a flat landing pad.

Around 1.5 Kilometers in altitude, the BE-3 re-started for its landing burn, involving heavy throttling on the engine and gimbaling to keep the booster on track. The Propulsion Module entered a hover over its pad, deployed its four landing legs and made a smooth upright touchdown.

“The very same booster that flew above the Karman line and then landed vertically at its launch site last November has now flown and landed again, demonstrating reuse,” Blue Origin owner Jeff Bezos said in a written statement. As per Blue Origin’s usual secrecy, no statement was made before or after the test flight until a highly produced video was released the day after the flight.

According to Bezos, the turnaround on the booster was relatively simple and included a series of inspections as well as functional and avionics checkouts. On the crew capsule, engineers replaced the parachutes and pyrotechnic deployment mechanisms to ready it for its next flight.

One modification tested in this most recent launch & landing endeavor was an improvement of the landing algorithm. In the November test, New Shepard was programmed to aim for the center of the landing pad which led to a significant correction maneuver when the vehicle was already were close to the ground.

Because a landing anywhere on the pad is sufficient, the flight software was tweaked to forego any last-minute maneuvers – initially aiming for the center but accepting a landing at any position on the pad, putting the priority on an upright landing instead of lateral positioning. This change is evident in the video as New Shepard touches down off-center but in a perfect vertical attitude at no horizontal speed.

This new landing regime is designed to reduce risks associated with late maneuvering and also improves the vehicle’s ability to tolerate disturbances created by low-altitude winds.

Blue Origin’s successful re-use demonstration marked another major step on the company’s path to mastering suborbital returns, a major driver in the business model of offering affordable tourist trips to space for a five-minute experience of weightlessness for up to six passengers on each flight.

In the last two months strides were made in the reusable launch business by two companies. SpaceX successfully recovered the first stage of a Falcon 9 rocket in December, going through a series of propulsive maneuvers to return to a concrete pad established at Cape Canaveral.

Falcon’s first stage, much larger in size than New Shepard, became the first rocket stage to make a propulsive return after conducting its part of an operational, orbital mission. Blue Origin’s efforts have so far been limited to suborbital test flights, conducted out of sight while SpaceX has been providing live footage of the successful landing last month as well as the subsequent landing attempt on a platform floating in the ocean.

Both SpaceX and Blue Origin have opted for vertical landings of rocket stages instead of the gliding landings demonstrated in previous decades by the Space Shuttle and SpaceShipOne.

“Though wings and parachutes have their adherents and their advantages, I’m a huge fan of rocket-powered vertical landing,” Bezos wrote. “Why? Because — to achieve our vision of millions of people living and working in space — we will need to build very large rocket boosters. And the vertical landing architecture scales extraordinarily well.”