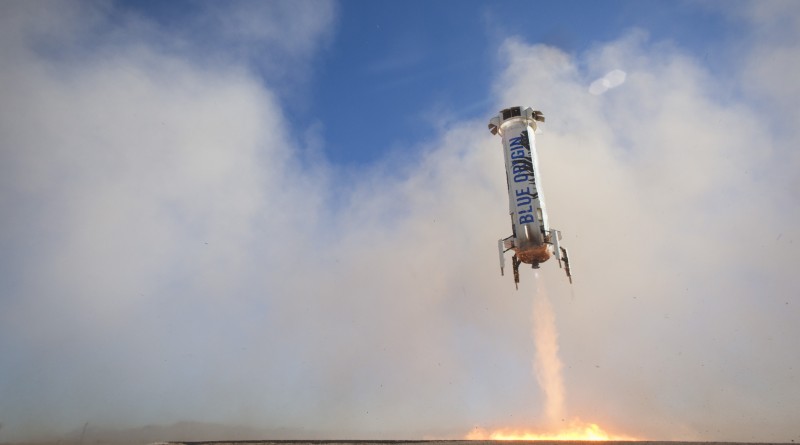 Blue Origin’s New Shepard reusable suborbital launch vehicle successfully flew to the edge of space again on Saturday and made a safe propulsive landing at its Texas launch site. This was the third flight for this particular booster in the company’s continued efforts of demonstrating the ability of repeatedly launching & landing the vehicle and turning it around for re-flight with minimal effort.

Amazon founder and Blue Origin owner Jeff Bezos announced the planned test via Twitter on Friday – a first for the company after previous New Shepard flights were not announced in advance and only confirmed after the fact with highly produced videos of the events. Bezos also noted that the test would involve a more aggressive landing burn of the New Shepard using a higher thrust level and starting closer to the ground than in previous flights.


This particular Propulsion Module flew for the first time on November 23, 2015 completing a climb to just over 100 Kilometers and returning under the power of its BE-3 main engine to a successful landing on a flat concrete pad. The vehicle flew again on January 22 following a similar ascent profile, but employing a modified landing algorithm to avoid last-second course corrections when the vehicle is already sufficiently centered on its landing pad. Both flights also involved the same Crew Capsule to demonstrate its reusability.

New Shepard lifted off from its West Texas launch site around 15:18 UTC on Saturday and climbed under the loud rumble of its 50,000-Kilogram-force BE-3 engine, consuming Liquid Hydrogen and Liquid Oxygen propellants. The vehicle headed straight up, aiming for a target altitude just over 100 Kilometers and a top speed around Mach 4 if following the typical ascent path used in recent test flights.

The Crew Module, offering space for up to six passengers, made a clean separation and descended under its parachutes to a gentle landing, further cushioned by soft landing engines. Bezos, providing real time updates on Twitter, confirmed a successful landing of the crew capsule.

For the Propulsion Module, the descent from the edge of space was a bit faster, falling back to the ground after separation of the Crew Module. The vehicle uses eight drag brakes and actuated fins to slow its descent and maneuver towards its landing pad, even in crosswind conditions.

This test flight employed a different landing scheme, calling for re-start of the BE-3 engine at an altitude of just 1.1 Kilometers – requiring the engine to quickly build-up thrust to guide the vehicle to a soft landing. Previous flights re-started the engine around 1.5 Kilometers above the ground, but running the engine at a higher thrust for a shorter period of time decreases gravity losses and provides additional propellant margin for the primary mission.

Saturday’s mission also used an improved Reaction Control System algorithm on the Crew Capsule to increase the performance of the system.

Bezos Tweeted that the Propulsion Module made a perfect landing and promised to publish video of the test flight as soon as Blue Origin can process footage collected from ground-based cameras, on-board video and drone footage.

Saturday’s New Shepard flight was the first to carry experiments to the edge of space as two University-built payloads were aboard the vehicle for the ten-minute trip.

The Collisions Into Dust Experiment (COLLIDE) developed at the University of Central Florida featured a marble being launched into a bed of dust in microgravity conditions. The collision of the marble with the dust was filmed in high-speed to possibly reveal mechanisms of dust collisions in the early solar system and interactions of particles within planetary rings, also looking at dust on bodies with insignificant gravitational fields.

The second experiment, called Box of Rocks Experiment (BORE) flew a pair of boxes filled with small rocks. The Southwest Research Institute Experiment collected video of the rocks in microgravity conditions to better understand the behavior of loose rocky soil on asteroids and other bodies. Video will be analyzed to reveal mechanisms behind the interactions of rock settling in microgravity.

With Saturday’s test flight, Blue Origin demonstrated a repeat re-use of its suborbital launch vehicle, continuing on a path to ramp up the pace of test flights. The company hopes to offer New Shepard missions for commercial research payloads as soon as late this year and crewed test flights could begin in 2017 to lead to the start of commercial crews flying on the vehicle in about two years.