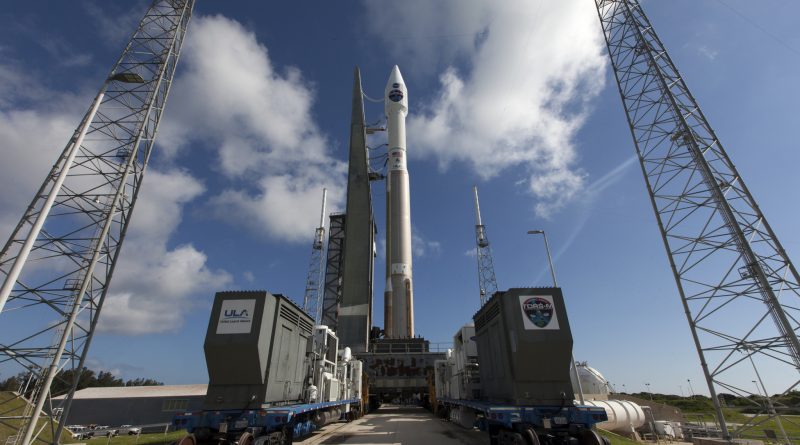 A reinforcement for NASA’s Tracking and Data Relay Satellite System stands ready for liftoff atop an Atlas V rocket on Friday to join the critical communications infrastructure used by the agency to keep in contact with astronauts aboard the International Space Station, beam down images from the Hubble Space Telescope and relay data to and from critical Earth-observation satellites and other low-orbiting and airborne assets.

Atlas V – flying in its basic two-stage configuration without boosters – targets liftoff from Cape Canaveral’s Space Launch Complex 41 during a 40-minute window opening at 12:03 UTC and the launch vehicle will be in action for nearly two hours, tasked with a pair of upper stage burns to inject the 3.5-metric ton TDRS-M satellite into a highly elliptical Geostationary Transfer Orbit. From its initial drop-off point, TDRS-M will spiral up into Geostationary Orbit to take the name TDRS-13 once entering operations as the third and final satellite in the third TDRS generation.


Conceived in the 1970s, TDRSS has become one of NASA’s most important satellite programs, operating a constellation of satellites in Geostationary Orbit to relay data from low-orbiting satellites to ground control and vice versa. Before TDRSS, NASA relied on a network of ground stations that covered only a small portion of a satellite’s orbit for sporadic communications – considered sufficient for satellites but the agency desired a solution that would permit a near-global coverage for constant contact between Mission Control and NASA’s Space Shuttle.

TDRSS began deployment in the 1980s with the Space Shuttle successfully deploying six of seven TRW-built first generation satellites through 1995 before switching to Boeing satellites and the Atlas IIA rocket for three second generation satellites deployed through 2002 and Atlas V for the launch of the third generation birds in 2013, 2014 and 2017. Going through three generations, TDRSS steadily raised its data rates to deal with an ever-increasing volume of data collected by orbiting spacecraft – currently providing services to some 40 NASA science missions in addition to ISS and Hubble as well as satellites for other U.S. government agencies, aircraft, balloons and remote outposts in Antarctica.


TDRS-M is intended to deliver follow-on and replacement capacity to maintain and expand NASA’s Space Network and ensure a continuation of services through the end of the 2020s when the International Space Station is expected to be retired. The TDRS satellites operate from Geostationary Orbit, 35,800 Kilometers in altitude with craft stationed over the Pacific, Atlantic and Indian Ocean to cover the entire planet and all orbital altitudes with at least three satellites in active duty to achieve global coverage.

TDRS-M was ordered from Boeing in November 2011 under a fixed price contract for $289 million, exercising a contract option that had been incorporated in the original third generation TDRSS order placed in 2007. The mission targeted launch readiness in 2015 but was delayed for no specific reason with NASA contracting United Launch Alliance in 2015 for Atlas V launch services under a $132.4 million contract.

TDRS-M weighs in at 3,450 Kilograms and is the final flight of Boeing’s BSS-601HP satellite platform as the company has moved on to the 702 satellite series for its commercial and government business. Although using an older satellite platform, the TDRS are among the most futuristic-looking satellites with antennas and appendages rolled up and tucked around the satellite body, ready to unfold once in space. While packed for launch, TDRS-M stands 8.1 meters tall and once in orbit will have a wingspan of 21 meters from tip to tip.

The satellite hosts a pair of 4.6-meter steerable mesh antennas, a 1.9m space-to-ground link antenna and a phased array S-Band antenna, combining single- and multi-access functions to be able to cater to the high-data needs of flagship missions like ISS while also maintaining low-rate communications with several other satellites at any time. Single-Access Communications in Ku/Ka-Band are possible up to 800Mbit/s, S-Band single access reaches 6Mbit/s – allowing large volumes of data to be returned to Earth which is of particular importance for ISS and several dozen experiments actively generating data at any given time aboard the complex.


TDRS-M is effectively a clone of the TDRS-K and L satellites and will join a total of nine still-functioning satellites in orbit with seven currently in active use and two older first generation satellites launched in the late 80s / early 90s available as backups. Arriving in Geostationary Orbit, TDRS-M is booked for a five-month stay at 150 degrees West for checkouts before moving to the Atlantic Ocean coverage area.

The launch of TDRS-M had to be delayed from an original August 3 target due to damage caused to one of its omni-S-Band antennas needed for telemetry and command exchange with the ground. Replacement and re-testing of the antenna pushed the mission to August 18 and subsequent launch campaign operations were smooth with TDRS-M taking its spot atop the Atlas V rocket on August 9th followed by Wednesday’s rollout to SLC-41 for a final day of preparations for Friday’s liftoff.

Meteorologists have issued a 80% chance of favorable conditions for Friday’s launch window, looking at thick and cumulus clouds as primary concerns, brought on by a surface through over Northern Florida. Teams already had plenty of weather issues to overcome after Wednesday’s rollout, having to interrupt work multiple times due to lightning warnings and even tornado advisories, though planning rollout at L-2 days provided the margin needed to complete all operations for countdown initiation in the very early hours on Friday.

The count will hold at T-2 hours for the final setup steps ahead of propellant loading that begins as soon as the countdown resumes from T-2 to feed 185,500 liters of -183°C Liquid Oxygen to the Common Core Booster first stage while the Centaur upper stage receives 15,700 liters of LOX and 48,100 liters of Liquid Hydrogen, stored at -253°C. The booster received its supply of 94,600 liters of Rocket Propellant 1 Wednesday night, leaving only cryogenic to be loaded during the count.

At T-2.7 seconds, the massive two-chamber RD-180 main engine of the Common Core Booster ignites and soars up to its full liftoff thrust of 390,250 Kilogram-force. The 58-meter tall Atlas V will take flight when clocks hit zero, gracefully lifting off its sea-side launch pad as the lack of boosters makes for a fairly slow initial climb-out from the pad.

After ascending vertically for 18 seconds, the Atlas V will begin its pitch and roll maneuver to align itself with its pre-determined flight path, departing Florida’s Space Coast to the east-south-east on the standard route to Geostationary Transfer Orbit. The rocket will pass the speed of sound around 80 seconds after launch and experience Maximum Dynamic Pressure 12 seconds later.

As the launcher rises out of the dense layers of the atmosphere, thrust on the Russian-built RD-180 will increase to 422 metric tons while the second stage prepares for its operation by chilling in the RL-10C main engine and pressurizing its reaction control system.

Four minutes and two seconds into the flight, the first stage will shut down the RD-180 engine after consuming some 284 metric tons of propellants. Six seconds after BECO, pyrotechnics will fire and solid-fueled retrorockets will push the 32.5-meter long first stage away to clear the way for ignition of the Centaur upper stage.

Firing up at T+4 minutes and 18 seconds, Centaur will soar to a thrust of 10,400 Kilogram-force to boost the stack into orbit. Eight seconds into the Centaur burn, Atlas V will split open its four-meter payload fairing and jettison the fairing halves to shed no-longer needed weight as aerodynamic forces can no longer harm the satellite.

The first of two Centaur burns has a planned duration of 13 minutes and 39.5 seconds, targeting an elliptical Parking Orbit in a mission design customized for the TDRS-M mission. One significant change on the Atlas V rocket from the last TDRS mission was the introduction of the RL-10C version on Centaur, prompting a slight adjustment to the rocket’s ascent profile when compared to the TDRS-K and L missions.

The second stage coast phase for TDRS-M will be one hour and 30 minutes in duration, some eight minutes and ~15 seconds longer than for the previous two TDRS missions which allows the stack to climb to a higher point in its Parking Orbit and optimizes the second burn. Centaur re-light is expected one hour and 48 minutes into the flight on a burn of 56.4 seconds to boost the satellite into an orbit of 4,640 by 35,788 Kilometers at an inclination of 26.2 degrees. The small change in coast duration is expected to deliver the craft to an optimized orbit that allows for a more fuel-efficient transition into Geostationary Orbit which directly translates to two years of additional spacecraft lifetime through a gain of stationkeeping propellants for its time in GEO.

Separation of the TDRS-M satellite is expected one hour and 54 minutes after liftoff to mark the conclusion of the 72nd Atlas V launch and the 120th mission operated by United Launch Alliance.