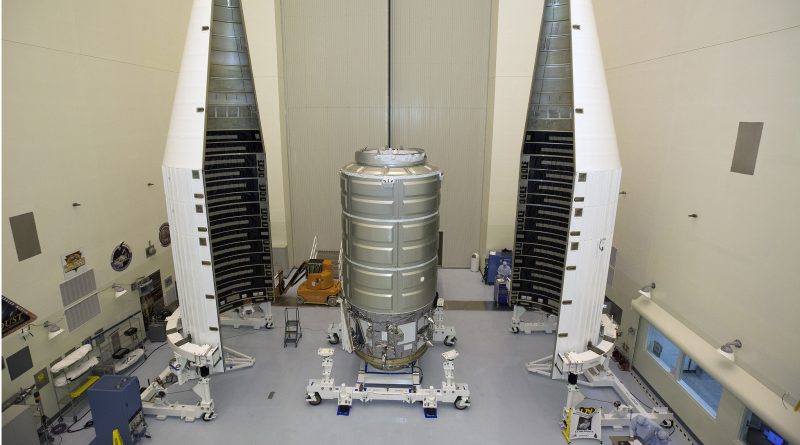 A United Launch Alliance Atlas V 401 rocket has been rolled to its launch pad at Cape Canaveral Air Force Station in preparation for the rocket’s first mission in support of the International Space Station, launching the Cygnus OA-4 resupply mission. Liftoff is aiming for an unprecedentedly long window of 30 minutes opening at 22:55 UTC on Thursday for a twilight launch along a ‘coast hugging’ flight path that should make for spectacular viewing from the United States East Coast.

This mission marks the return to flight for the Cygnus spacecraft after the October 2014 failure of the Antares launch vehicle seconds after liftoff leading to the loss of the Cygnus Orb-3 spacecraft. The failure was traced back to a material defect introduced during the construction of the rocket’s aged main engines originally built in the Soviet Union. It had already been a firm plan to eventually transition Antares to a new engine system and Orbital Sciences (now Orbital ATK) decided to accelerate this transition and immediately fit Antares with newly-built RD-181 engines.


However, modifying the launch vehicle and completing tests of the rocket and the re-built launch pad takes some time and Orbital felt the responsibility the company had with respect to keeping ISS resupplied. Only weeks after the failure, United Launch Alliance was contracted for a pair of interim Cygnus missions to bridge the gap until the Antares 200 Series will be able to make its debut mission. Working together, the two companies put this mission together in a little less than one year – no small feat given ULA’s busy launch manifest and the amount of analysis needed to validate commonality between launcher and spacecraft.

The OA-4 mission is the first flight of the Enhanced Cygnus spacecraft that features an extended cargo module, new Orbital ATK solar arrays that are more efficient and lighter than those previously used and modifications to the Service Module structure as part of weight reduction. Launching the Enhanced Cygnus atop the powerful Atlas V rocket allows the spacecraft to be filled to the brink with cargo, carrying a total of 3,513kg of supplies to ISS – also starting to make up for cargo lost in last October’s failure.

The first component of the Cygnus spacecraft, its Pressurized Cargo Module, arrived at the Kennedy Space Center in August and was followed by the Service Module in October. Pre-launch operations – including cargo loading and the joining of the Cargo and Service Modules, was performed at the Space Station Processing Facility. Propellant loading on the spacecraft was completed in early November and Atlas V began its integration at the same time as the Common Core Booster was installed atop the Mobile Launch Platform, joined by its Centaur Upper Stage a few days later to enter its standard testing campaign. Cygnus took its place atop Atlas V on November 20 for a set of integrated tests and launch rehearsals leading to the Launch Readiness Review performed earlier in the week and the rollout of the 58-meter tall rocket on Wednesday.

Thursday’s launch has a 30-minute launch window which is unprecedented for a mission targeting a rendezvous in Low Earth Orbit. Typically, missions to the International Space Station only have an instantaneous window when the orbital plane of the Station moves into the precise position over the launch site. Instantaneous windows are used by SpaceX’s Falcon 9 and Japan’s H-IIB when launching ISS missions. The Russian Soyuz has a 10-second window which essentially can be considered instantaneous as well.

For vehicles capable of yaw-steering and quick-retargeting of ascent trajectories accounting for the rotation of the Earth, windows of a few minutes are possible – like the 10-minute launch window the Space Shuttle used to have or the five-minute window of the Antares rocket.

To achieve a 30-minute window, United Launch Alliance uses two of its capabilities – the ability of Atlas V to steer back into an inertial plane by using some of its excess performance and ULA’s capability of quickly re-targeting the ascent trajectory of Atlas V by uploading a new trajectory file to the launcher’s flight computer to guide it into the orbital plane of ISS, flying out the cross range distance introduced by the rotation of the Earth.

On launch day, five trajectory solutions will be available for Atlas V, spread across the launch window – the first at the opening of the window followed by four opportunities at 7.5-minute intervals, giving the vehicle plenty of opportunities to get off the pad in case of a last-minute hold-up due to weather or a technical snag.

Meteorologists are predicting a 60% chance of favorable weather for Thursday’s window, dominated by a cold front moving from north to south bringing high moisture and clouds. Primary concerns for launch weather are cumulus clouds, disturbed weather and thick clouds. For the backup launch slot on Friday, an upper-level disturbance enhances the rain threat and brings higher winds. Concerns for Friday are the same as Thursday with the addition of high ground winds, creating a probability of launch weather criteria violation of 60%.

Set free into an orbit of 230 Kilometers, inclined 51.6 degrees, Cygnus OA-4, also known as the SS Deke Slayton II, will complete orbit raising maneuvers for a rendezvous with the International Space Station on Sunday, provided Atlas V launches on time.

After ascending vertically for 18 seconds, the Atlas V will begin its pitch and roll maneuver to align itself with its pre-determined flight path, departing Florida’s Space Coast to the north-east on a coast-hugging trajectory. Given the expected lighting conditions, the launch will be widely visible along the East Coast of the United States.

After 73 seconds, the rocket passes Mach 1 followed by Maximum Dynamic Pressure about 11 seconds later. As the first stage approaches the 4-minute mark into the flight, it will start throttling down its RD-180 engine to maintain a maximum acceleration of 5 Gs. During first stage flight, the Centaur Upper Stage initiates Reaction Control System pressurization and boost-phase chilldown.

Four minutes and 16 seconds into the flight, the first stage will shut down its RD-180 engine. At T+4:22, six seconds after shutdown, pyrotechnics will be fired to separate the Common Core Booster that then uses eight small solid rocket motors to move away from the Centaur upper stage.

At T+4:32, the RL-10C engine of the Centaur Upper Stage will ignite on its first and only burn of this mission. This burn is planned to be 13 minutes and 45 seconds in duration using the 11,200kgf engine of the upper stage to push the stack into orbit. Seven seconds into the burn, Centaur will jettison its protective payload fairing.

Cygnus is aiming for a circular orbit of 230 Kilometers at an inclination of 51.6 degrees for spacecraft separation 21 minutes and 6 seconds after launch to begin its mission. The Centaur Upper Stage will complete a collision avoidance maneuver before conducting a deorbit maneuver.