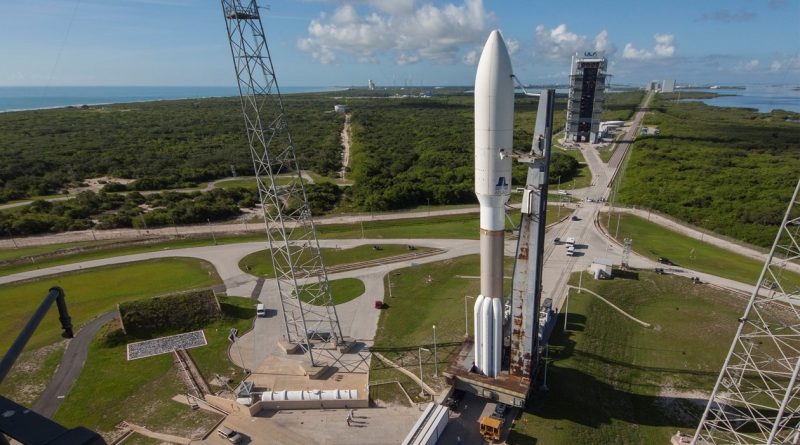 After successfully launching a clandestine reconnaissance satellite atop the most powerful Delta IV rocket two weeks ago, United Launch Alliance rolled the most powerful Atlas V to its Cape Canaveral pad for liftoff on Friday with a heavy communications satellite for the U.S. Navy.

Enshrouded in Atlas V’s five-meter payload fairing is the fifth satellite for the Multi-User Objective System, delivering global UHF communications to mobile users. To lift the 6,740-Kilogram MUOS 5 satellite to Geostationary Transfer Orbit, Atlas V enlists the power of five strap-on Solid Rocket Boosters that will quickly lift the vehicle off the ground and into orbit.

Atlas V 551 is set for liftoff during a 44-minute launch window opening at 14:30 UTC to mark the beginning of a three-hour climb into a highly elliptical orbit from where the satellite will make its way into Geostationary Orbit where its speed matches that of Earth’s rotation and keeps the spacecraft over the same location.


Within the $7.7-billion MUOS communications framework, the 5th satellite will serve as a spare – ready to be moved to any orbital location should one of the primary satellites run into problems at some point in the future.

The MUOS satellites were built by Lockheed Martin, outfitted with two large mesh antennas that will deploy once the satellite arrives at its high-altitude perch to deliver 2 x 16 communications beams to carry voice and data at speeds of 384kbps – accepting the UHF uplink of mobile terminals and converting it into a Ka-Band downlink to a ground station and vice versa.

MUOS delivers coverage to all areas of Earth and can penetrate foliage and transmit through bad weather. Robustness of the system is guaranteed by having a spare satellite in orbit and ready to enter service to avoid any lengthy downtime.

The five satellites in orbit are served by four ground stations in Australia, on the Island of Sicily, Italy, and in Virginia and Hawaii. The spacecraft are fully compatible with heritage systems that are still in use and will be gradually replaced by new radios and terminals, phased in over the next two years.

Friday’s launch marks the comeback for the Atlas V rocket after a close call on the Cygnus OA-6 mission that encountered a significant performance-shortfall on the first stage owed to a problem with a propellant mixture valve on the two-chamber RD-180 engine.

Burning propellant at an imbalanced rate, RD-180 operated at lower-than-expected performance and was shut down five seconds early when the uneven consumption of propellants caused the booster’s liquid oxygen supply to run out.

Centaur saved the mission by making up for the performance loss, extending its burn by over a minute and consuming excess propellants – a rare commodity in rocketry as most missions require all or the vast majority of the rocket’s performance, not leaving this much margin. A mission with a heavier payload going to a higher-energy orbit – such as the hefty MUOS satellites – would not have been successful due to less margin available for the upper stage burn.

ULA did not take the in-flight anomaly lightly and completed an in-depth analysis to pint-point the root cause of the issue with the Mixture Ratio Control Valve. A small change to the hardware is implemented on this and all future RD-180 engines to prevent a recurrence of the problem and Atlas V was cleared to re-start flights in early June.

The launch of MUOS 5 is the third of ten planned Atlas flights this year and ULA expects to fly all manifested missions despite the delay caused by the investigation into the OA-6 flight anomaly.

The Atlas V rocket completed assembly in April and May – starting with the installation of the 32.5-meter tall Common Core Booster on the Mobile Launch Platform. Clustered around the CCB are five 46,700-Kilogram Aerojet Rocketdyne Solid Rocket Boosters, each generating 172,000 Kilogram-force of thrust for the first 94 seconds of the flight – delivering the kick needed to send MUOS 5 into orbit.

Sitting atop the core is the trusted Centaur Upper stage, 12.7 meters long and outfitted with a single RL-10C engine that will be tasked with three burns on Friday.

MUOS 5 was installed on Centaur already encapsulated in its protective payload fairing and Atlas V completed an extensive testing campaign ahead of being cleared for liftoff. On Thursday, the 62-meter rocket emerged from its Vertical Integration Facility as its mobile launch table was moved over to the Launch Pad at Space Launch Complex 41 to ring in a final set of preparatory steps for Friday’s seven-hour launch countdown.

Weather is looking favorable with an 80% chance of acceptable conditions provided by the 45th Weather Squadron in its L-1 forecast. Isolated showers and thunderstorms are expected to form in coastal areas and migrate inland due to the seabreeze. The primary threat is a small chance of cumulus clouds causing weather rule violations during the launch window.

Similar weather is expected in case teams have to defer to the backup window on Saturday, also showing an 80% chance of good weather.

Ahead of the countdown, technicians will already be busy at the pad, completing final hands-on work and closing out the Vertical Integration Facility, pad facilities and the Atlas V launcher. The first step completed at T-6 Hours 20 Minutes is the activation of the Atlas V rocket.

As the five boosters ignite, Atlas V will jump off the pad with a liftoff thrust of 1.25 Million Kilogram-force creating an initial thrust to weight ratio of 2.15. Less than ten seconds after liftoff, Atlas V will start its roll and pitch program to align itself with its precise ascent path, heading east. Atlas V will pass Mach 1 just 38 seconds after blastoff and encounter Maximum Dynamic Pressure just after passing 49 seconds into the flight.

Burning out after 94 seconds, the four SRMs will have completed their job of providing that extra push needed to boost MUOS into orbit. The vehicle will hold onto the SRMs for about 14 more seconds before separating them in a staggered fashion – first jettisoning SRMs 1 and 2 followed 1.5 seconds later by the remaining three boosters.

Powered by the RD-180 engine alone, Atlas V will continue its flight, burning 1,150 Kilograms of propellant each second. Climbing out, Atlas V will separate its protective payload fairing three minutes and 28 seconds after launch, exposing the MUOS-5 satellite since the launcher will be out of the dense atmosphere where aerodynamic forces can no longer harm the spacecraft. The Forward Load Reactor is jettisoned five seconds later.

Approaching the end of the first stage burn, the RD-180 engine will be throttled back to maintain a maximum acceleration of 4.6 Gs. Shutdown of the Common Core Booster occurs at T+4 minutes and 26 seconds followed two seconds later by stage separation that is accomplished by firing pyrotechnics and igniting eight retrorockets on the CCB to safely take it away from the Centaur Upper Stage.

RL-10C delivers 10,800 Kilogram-force of thrust over a burn of 7 minutes and 47 seconds that will deliver the stack into a Low Earth Parking Orbit of around 195 by 245 Kilometers, inclined 28 degrees. MUOS missions do not take the standard route to Geostationary Transfer Orbit which would require two upper stage burns – the first to a Parking Orbit and the second over the equator to raise the apogee. Instead, MUOS uses a three-burn mission to achieve an orbit closer to GEO in term of the change in velocity needed by the spacecraft to boost itself to its operational orbit.

The second burn is planned to begin 20 minutes and 30 seconds into the flight and last for 5 minutes and 47 seconds to boost the apogee of the orbit in order to achieve an elliptical transfer orbit with a high point over 30,000 Kilometers in altitude. Next is a long coast phase to allow the stack to gain altitude so that the short third burn can be conducted at an altitude beyond perigee but before arriving at apogee which will result in an altitude increase on both, perigee and apogee.

The third burn will be just 58.3 seconds in duration beginning two hours, 48 minutes and 40 seconds into the flight, targeting an insertion orbit of 3,841 by 35,706 Kilometers at an inclination of 19.1 degrees.

Separation of the MUOS 5 spacecraft is expected two hours and 53 minutes after liftoff to be sent on its way to complete five months of commissioning and tests before entering its backup role in the operational constellation.

Centaur will finish its mission with the standard Contamination and Collision Avoidance Maneuver while MUOS 5 begins communicating with ground stations to begin eight days of orbit-raising ahead of the deployment of its two large solar arrays and huge antenna reflectors to be able to head into testing.