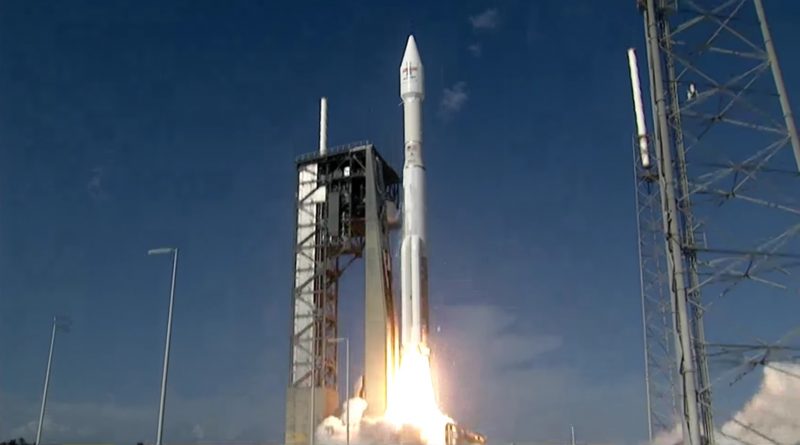 ULA’s mighty Atlas V rocket thundered off from Cape Canaveral Sunday afternoon, lifting into orbit the world’s most powerful broadband satellite to deliver Internet services to over one million homes and businesses across the United States.

Atlas V, beefed up with three Solid Rocket Boosters, blasted off from Space Launch Complex 41 at 19:13 UTC, 2:13 p.m. local time on a high-energy delivery with the EchoStar 19 satellite, aiming for a Supersynchronous Transfer Orbit peaking at 65,000 Kilometers in altitude.

Racing into clear skies with a thrust of 907 metric tons, Atlas V rolled onto a south easterly flight path to take the standard route to Geostationary Transfer Orbit. The three boosters dropped away from the ascending rocket two minutes into the mission and the first stage continued firing its RD-180 engine until the four-and-a-half-minute mark. Taking control of the flight, the trusted Centaur upper stage first put the stack into a Low Earth Orbit and then fired a second time to inject the 6,760-Kilogram satellite into a highly elongated orbit.


EchoStar 19 was sent on its way 32 minutes after liftoff, set to join HughesNet’s satellite fleet to deliver coast-to-coast broadband coverage over the U.S, serving millions of customers that do not have access to terrestrial high-speed networks. The satellite brings some urgently needed relief as Hughes has booked a number of the company’s communications beams to full capacity and needs additional capacity to take on new customers and expand business in certain areas.

EchoStar 19 was built by Space Systems/Loral in California and hosts a powerful Ka-Band bent-pipe payload supporting an impressive data throughput of over 200 gigabits per second. Rooftop-mounted antennas on homes and businesses receive and transmit data to and from the EchoStar-19 satellite which connects customers to the internet via ground-based gateways. In total, the satellite will offer 138 customer spotbeams and 22 gateway beams.

Hughes currently operates a pair of broadband satellites – Spaceway-3 and EchoStar-17 launched on Ariane 5 rockets in 2007 and 2012, at the moment serving just over one million customers across the United States. EchoStar-19 – with 50% more capacity than EchoStar-17 – will enable Hughes to offer expanded services in the United States while also taking advantage of surplus capacity to enter markets in Canada, Mexico and other Central American countries.

Like its two predecessors, EchoStar 19 was planned to head into orbit atop an Ariane 5 rocket as part of a multi-launch agreement between EchoStar and Arianespace, however, no slot on the European workhorse was available due to the mass of the satellite and its construction schedule. To keep an early 2017 in-service date for the satellite, EchoStar decided to move the satellite to the more-expensive Atlas V rocket offered on the commercial market by Lockheed Martin Commercial Launch Services.

Although Atlas V comes with a relatively high price tag, Hughes expects the benefits of launching on the Atlas to quickly outweigh the cost. Getting EchoStar 19 into orbit before the end of the year means that the satellite can begin generating revenue earlier than with a mid 2017 launch on Ariane 5, also gaining a leg-up on competitor ViaSat that is currently waiting for a 2017 liftoff of their ViaSat-2 spacecraft, targeting the same market as EchoStar 19. Entering operations before the competition may allow Hughes to capture unmet demand for broadband connectivity as an additional source of revenue.

Another factor was orbit-optimization offered by the Atlas V which can deliver the spacecraft to a Supersynchronous Transfer Orbit and save it considerable propellants for use during an extended mission beyond the satellite’s 15-year design life.

EchoStar 19 is the fifth EchoStar spacecraft to launch on an Atlas rocket, although the company has acquired other Atlas-launched spacecraft through takeovers and mergers, forming a large satellite fleet offering all types of communications services.

Sunday’s launch marked the closing mission for the Atlas V rocket in 2016, coming in at eight successful launches compared to nine missions flown in 2015 and 2014. Payloads lofted by Atlas V in 2016 came from a diverse palette of government and commercial missions picking up in February with the launch of GPS IIF-12 for the U.S. Air Force, completing the six-year effort to deploy the next-generation of navigation satellites.

Next for Atlas V was the Cygnus OA-6 mission in late March on a critical cargo run to the International Space Station which ended in a close call when the Atlas V first stage suffered a not insignificant performance issue related to a propellant mixture valve that operated out-of-spec. The trusted Centaur upper stage managed to limp into orbit and deliver Cygnus on target, allowing ULA to keep its impeccable success record, though the close call led to an investigation and a three-month stand-down of Atlas V missions.

Atlas V came back in June when it thundered off from Cape Canaveral in its most powerful configuration to lift the MUOS 5 communications satellite for the U.S. Navy, a launch followed in July by a hush-hush mission for the National Reconnaissance Office with the classified NROL-61 satellite. On September 8th, Atlas V added to its interplanetary record, lofting NASA’s OSIRIS-REx spacecraft on a seven-year journey to capture a sample from an asteroid and return it to Earth.

The only West Coast Launch of the Atlas V came on November 11 with the commercial WorldView-4 imaging satellite, followed eight days later by the launch of NASA’s GOES-R meteo satellite from Cape Canaveral, ringing in a new era of weather forecasting.

Out of Atlas V’s 68 launches, only 16 were for commercial customers with the majority of the rocket’s business coming from the U.S. government including the armed forces, NASA science missions, and spy satellites operated by the NRO. United Launch Alliance began gearing more towards commercial business in 2016 with two major initiatives:

The RapidLaunch Program will make Atlas V launches available as soon as three months after a contract is signed, aiming at customers that may be interested in switching from other launch providers when encountering delays to their manifest as seen with SpaceX’s Falcon 9 and Russia’s Proton – both of which had to stand down for several months in 2016.

Rolled out last month was ULA’s RocketBuilder, a tool that allows potential customers to tailor a rocket to their mission requirements and receive an estimated price tag along with potential savings coming with Atlas V’s reliability and schedule certainty.

To send the particularly heavy EchoStar 19 into orbit, Atlas V utilized its most powerful 400-series version on Sunday, adding three Solid Rocket Boosters to the two-stage stack of Common Core Booster & Centaur to create a 474-metric-ton rocket that can push over 7,500 Kilograms into a standard Geostationary Transfer Orbit.

Standing over 60 meters tall, Atlas V was moved to the launch pad Saturday morning to complete final preparation for a seven-hour countdown that picked up at 11:27 UTC on Sunday. Atlas V went through a multi-hour testing operation while teams buttoned up the launch facility before evacuating the complex around three hours prior to launch.

Fully checked out and in good shape, Atlas V entered cryogenic tanking when coming out of a built-in hold at T-2 hours. Over the course of the 90-minute fueling sequence, the first stage of Atlas V was loaded with 185,500 liters of -183°C Liquid Oxygen while Centaur was filled with 15,700 liters of LOX and 48,100 liters of -253°C Liquid Hydrogen. The Common Core Booster had received its dose of 94,600 liters of Kerosene ahead of Sunday’s countdown to decompress the fueling sequence as has become standard for Atlas V.

A second round of systems checks was completed around an hour prior to launch and Atlas V stood fully fueled when heading into a half-hour built-in hold at T-4 minutes for the final setup steps. EchoStar 19 made its transition to internal power while Atlas V finished propellant conditioning to ensure all tanks were at flight mass, ready to give the satellite a boost into a high-energy orbit. All launch support stations reported readiness when polled for a final Go/No Go, approving the rocket to press into its highly choreographed Automated Countdown Sequence.

The first attempt to get Atlas V off the ground was halted at T-74 seconds due to a suspect electrical reading from one of the rocket’s Inertial Measurement Systems warranting a closer look by engineers. A review of the issue was completed by an assembled Anomaly Team and engineers came to the consensus that the IMS was functioning correctly, allowing Atlas V to head back into a launch posture.

With clocks ticking back from T-4 minutes, Atlas V began pressurizing is tanks and switched to internal power before assuming control of the countdown to check off the final automated tests. The Eastern Range reported final clearance for launch inside one minute and Atlas V reached flight pressure on all tanks to set up for ignition.

The two-chamber RD-180 engine soared up three seconds prior to liftoff to reach 392 metric-ton-force of thrust prior to igniting the trio of Solid Rocket Boosters. Atlas V lifted off with a total thrust of 907 metric-ton-force, shooting up from its launch pad and climbing vertically for just five and a half seconds prior to initiating the pitch and roll maneuver to attain its launch azimuth to the east-south-east.

Consuming nearly 2,500 Kilograms of propellant per second, Atlas V pushed through the sound barrier 45 seconds after liftoff followed 12 seconds later by Maximum Dynamic Pressure for which the RD-180 throttled back in order to reduce stress on the rocket. The three AJ-60 boosters exhausted their 41,000-Kilogram propellant supply at T+94 seconds, however, Atlas V held onto the SRBs for another 31 seconds to separate them in a more benign aerodynamic environment.

The three boosters dropped away from the still-firing core two minutes and 5 seconds into the flight with Atlas V switching to closed loop control a short time later to begin processing navigation data to home in on its precise orbital target. Burning through 1,150 Kilograms of propellant per second, the NPO Energomash RD-180 engine generated 422,000 Kilogram-force of thrust when flying through the rarefied upper atmosphere – throttling down again when coming close to shutdown to limit acceleration on the vehicle to 5G.

RD-180 shut down four minutes and 27 seconds into the flight with pyrotechnic charges firing to separate the 32.5-meter Common Core Booster to then fire eight retrorockets to pull away from the Centaur Upper Stage. Ten seconds later, the RL-10C engine of the Centaur soared to 10,800 Kilogram-force of thrust of deliver the stack to a Low Earth Parking Orbit via a burn of eight minutes and 56 seconds.

The four-meter Extra-Extended Payload Fairing (XEPF) separated from the vehicle just after Centaur ignition to shed no-longer-needed weight and reveal the EchoStar 19 satellite for the rest of its way to orbit. Thirteen and a half minutes after launch, Centaur concluded its first burn and arrived in an orbit of 167 by 659 Kilometers, inclined 27.9 degrees for a brief coast phase.

The nine-and-a-half-minute coast phase was implemented to allow Atlas V to continue on its south-easterly heading, cross the Atlantic and fire up again around the equator to that the high point of the injection orbit would also be located above the equator to ease the process of phasing the satellite into Geostationary Orbit. Centaur re-started at T+23 minutes and fired for just shy of six minutes, aiming for an orbit of 204 x 65,000 Kilometers at an inclination of 25.44 degrees.

Over a period of days and weeks, EchoStar 19 will maneuver into its parking space at 97.1 degrees west in Geostationary Orbit, in view of the Americas. Deployment of the solar arrays and antenna reflectors will occur after the satellite arrives in GEO followed by detailed checkouts before EchoStar 19 will be declared open for business.

For EchoStar, Sunday’s mission marked the first of three satellite deliveries planned in the coming weeks with EchoStar 21 set for liftoff atop a Russian Proton-M rocket on December 28 and EchoStar 23 gearing up for launch on a SpaceX Falcon 9, becoming the first to launch from Launch Complex 39A at the Kennedy Space Center in mid-January.

ULA, after executing a dozen launcher this year, is now looking forward to a short holiday break before returning to launch operations on January 20th when an Atlas V rocket will lift the SBIRS-GEO 3 missile early warning satellite for the U.S. Air Force.