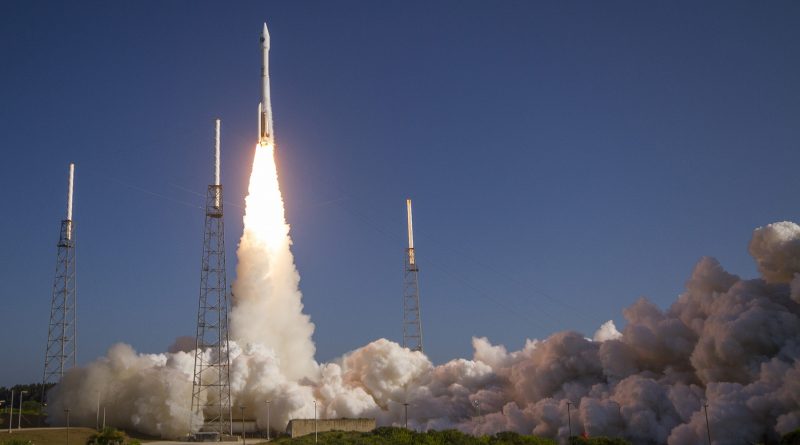 Topped by a classified National Reconnaissance Office Payload, Atlas V departed Florida’s Space Coast to the south east, flying into a pre-arranged News Blackout five minutes after launch to allow NROL-61 to continue climbing into a classified orbit without the public watching.

Atlas V – flying in the 421 configuration with a pair of Solid Rocket Boosters – leapt off its SLC-41 launch pad at 12:37 UTC, 8:37 a.m. local time and quickly ascended into clear skies to head to what is expected to be a Geostationary Transfer Orbit. The launcher dropped its boosters two minutes into the flight and fired its RD-180-powered first stage for a little over four minutes before the Centaur Upper Stage took over.

Centaur is expected to fire twice, first heading into a Low Earth Parking Orbit and again to lift the high point of the orbit to over 35,700 Kilometers for spacecraft separation under 45 minutes after launch. Confirmation of launch success was provided when NROL-61 had separated from the launcher and was flying on its own.


Confirmation of launch success is the last to be heard of NROL-61 from official sources given the typical secrecy of NRO missions, but satellite trackers around the world are ready to spot the newly launched spacecraft and monitor orbital activities.

The NRO is responsible for the construction and operation of all U.S. reconnaissance spacecraft and the distribution of image, signals, and signature intelligence to the various intelligence agencies including the CIA, DIA and NGA.

As an intelligence agency itself, the NRO goes through great lengths to keep its activities secret.

It was founded in 1961 and operated in complete secrecy for three decades until its existence was first acknowledged. In the 90s, the NRO began announcing its launches ahead of time but to this day keeps the identity of all its active satellite programs secret. However, occasional leaks of information provide insights into ongoing programs and a worldwide network of satellite trackers keeps tabs on the orbital locations and activities of NRO spacecraft.

In recent years, the identity of NRO satellites was well known prior to launch using information such as the launch vehicle configuration, launch site & time, and ascent trajectory to make an educated guess of what was being launched followed by confirmation through orbital tracking. For NROL-61 the case is somewhat more complex because Atlas V 421 was never used before in an NRO mission and represents a very specific vehicle in terms of performance – making use of Atlas V’s ability to be tailored to specific mission’s needs by adding between one and five Solid Rocket Boosters.

The most likely candidate for NROL-61 is it being the first in the fourth generation of Satellite Data System spacecraft which operate from Geostationary Orbit to relay communications from satellites in lower orbits including Keyhole image reconnaissance birds, enabling real-time downlink of imagery for tactical applications.

This educated guess is based on the type of launch vehicle in use for Thursday’s mission, the ascent trajectory clearly targeting GTO and the overall framework and replenishment speed of current NRO programs.

SDS satellites of the third generation were launched on Atlas V 401 vehicles – either indicating the next generation of satellites gained mass or that a dual-payload mission is being conducted, a theory supported by the use of the Extra-Extended Payload Fairing on this flight.

Trackers will be able to answer the question of how many satellites were launched within a few days when spotting NROL-61 in its initial orbit.

The Satellite Data System, also known under the codename Quasar, started out in the 1970s when the first generation of satellites was introduced – tasked with the relay of data from lower-orbiting spacecraft, comm relay to U.S. Air Force Aircraft flying in the northern regions and interconnecting the USAF Satellite Control Network.

Unlike previous mission insignia featuring dragons, Greek gods, raging bulls and the controversial Octopus of NROL-39, the NROL-61 patch features a lighter theme, prominently displaying a lizard nicknamed Spike acting as a mascot for this mission, part of a STEM initiative of the NRO. In the patch of the mission, Spike rides shotgun on the Atlas V rocket, soaring into space.

Launch controllers initiated a lengthy countdown just before 2 a.m. local time on Thursday, powering up the Atlas V launch vehicle for several hours of testing while teams at the launch pad buttoned up all facilities for the start of propellant loading. After a 15-minute pause at T-2 hours, Atlas V pressed into cryogenic tanking – starting with the chilldown of the Liquid Oxygen tanks aboard the vehicle before the -183°C oxidizer began flowing into the two-stage stack followed later by -253°C Liquid Hydrogen, being pumped into the Centaur Upper Stage.

Standing over 59 meters tall, Atlas V 421 is comprised of a Common Core Booster with two Solid Rocket Boosters and the trusted Centaur sitting atop.

The CCB – 32.5m tall and 3.81m in diameter – received 284,089 Kilograms of propellants, a combination of LOX loaded during the countdown and Rocket Propellant 1 that was tanked Tuesday afternoon. Centaur stands 12.7 meters tall and is 3.05m in diameter, holding 20,830 Kilograms of cryogenics to be used during multiple burns.

Each of the two Aerojet Rocketdyne Boosters is 17m in length and loaded with 40,950kg of solid propellant to assist the first stage during the initial flight phase.

Fully fueled and with good systems checks, Atlas V received an updated version of its flight software while NROL-61 transitioned to battery power to be ready for the Automated Countdown Sequence picking up at T-4 minutes. All support stations voiced a GO for launch, looking at a clean launch vehicle, clear range and pristine weather conditions at the Space Coast.

Going through the highly choreographed countdown sequence, Atlas V switched to internal power, armed its Flight Termination System, pressurized its propellant tanks and started up its launch sequencer for a final onboard check of hydraulic pressures before commanding the main engine to ignite.

The Russian-built, two-chamber RD-180 engine roared to life at T-2.7 seconds throttling up to a launch thrust of 392,250 Kilogram-force, carefully monitored by computers to ensure the engine was ready before Atlas V was committed to flight.

Upon ignition of the twin boosters at 12:37:00 UTC, Atlas V leapt off its launch pad with a total thrust of 735 metric-ton force – quickly clearing the Mobile Launch Platform and the new Crew Access Tower established at SLC-41 for the upcoming missions of Boeing’s CST-100 Starliner.

Atlas V initiated its pitch and roll maneuver six seconds after liftoff to align itself with a 99-degree launch azimuth, departing Florida to the east-south-east, on the standard route to Geostationary Transfer Orbit. The vehicle pushed through the speed of sound 49 seconds after liftoff followed a few seconds later by Maximum Dynamic Pressure for which the RD-180 was throttled down slightly to limit stress on the vehicle.

Each delivering 172 metric-ton-force of thrust, the twin boosters burned out 94 seconds after liftoff, but Atlas V held them for another 35 seconds to ensure a safe off-shore splashdown. With the boosters gone, Atlas V continued heading uphill powered by the RD-180 alone, preparing the second stage for ignition by firing pyrotechnic valves and chilling down the RL-10 engine.

The Common Core Booster shut down its engine four minutes and nine seconds after launch followed six seconds later by the separation of the stages as the CCB fired up eight retros to pull away from Centaur which immediately purged its Reaction Control System and pre-started the RL-10C engine. Ten seconds after staging, Centaur lit up its RL-10C engine, delivering 11 metric ton-force of vacuum thrust to boost the stack into orbit.

Four and a half minutes into the flight, Centaur jettisoned its protective payload fairing, exposing NROL-61 for the rest of its ride into orbit.

As per the standard procedure for NRO launches, the live broadcast of the mission ended at this point in the flight to allow NROL-61 to head into its classified orbit out of public sight.

The expected ascent trajectory calls for Centaur continuing to burn for over ten minutes to lift the stack into a slightly elliptical transfer orbit around 185 by 830 Kilometers at the standard 28-degree inclination. In this orbit, the stack will coast for only a few minutes to position the second burn over the equator so that the high point of the injection orbit will be located over the equator as well, easing the process of maneuvering the satellite(s) to Geostationary Orbit.

According to satellite tracking expert Ted Molczan, the most probable insertion orbit will be near 844 by 35,743 Kilometers, inclined 13.4 degrees – suggesting Centaur will complete a significant reduction of inclination during the second burn to reduce the change in velocity needed by the satellite to reach is Geostationary Orbit.

Spacecraft separation will take place under 45 minutes after liftoff to set up for Centaur’s deorbit maneuver, expected around 65 minutes into the mission to place the upper stage into a sub-orbital trajectory with a negative perigee for re-entry after one lap around the planet – a little over eight hours after launch. Centaur will be meeting its fiery demise over the Pacific Ocean, south of Hawaii.

This was the 646th launch of an Atlas vehicle in a program dating back to 1957. It was the 64th Atlas V and the 6th flying in the 421 configuration. NROL-61 was the 4th Atlas V launch of the year with six more to follow. The next assignment for Atlas V will be lifting the OSIRIS-REx sample return mission for NASA.