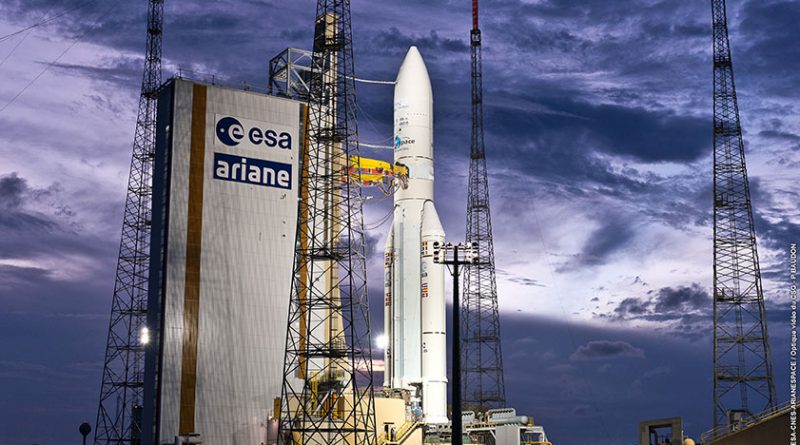 The launch of Europe’s Ariane 5 workhorse is being delayed from Wednesday due to technical issues encountered prior to the rollout of the 53-meter tall rocket on Tuesday. Arianespace will announce a new launch date as soon as the faulty fluid line between the ground equipment and Ariane’s upper stage is replaced.

The VA230 mission of Ariane 5 is tasked with lifting the EchoStar 18 and BRIsat communications satellites for a total payload mass of 10,731 Kilograms – a new record for a Geostationary Transfer Mission on Ariane 5. The previous record stood at 10,497kg set in 2013.

This also marks the first time two satellites built by Space Systems Loral share a ride on the Ariane 5 rocket. Both are based on the flight-proven LS-1300 satellite platform with EchoStar 18 flying in a high-power configuration for a total satellite mass of 6,300kg and BRIsat utilizing a medium-power configuration weighing in at 3,540 Kilograms.


EchoStar 18 is operated by Dish Network Corporation (EchoStar) to deliver broadcasting services to the Continental United States, Alaska, Hawaii, Puerto Rico and Cuba to a customer base of nearly 14 million. The spacecraft sports 78 Ku-Band transponders and exclusively uses spot-beam technology for the transmission of the communications carriers to create a system with a high-degree of flexibility.

The launch campaign for the VA230 mission started back in March when the components of the Ariane 5 rocket arrived at the spaceport after a long journey from Europe. Assembly of the rocket began shortly thereafter with the installation of the Cryogenic Core Stage on the launch table followed by the attachment of the twin Solid Rocket Boosters. The final component to be installed was the Cryogenic Second Stage ESC with the Vehicle Equipment Bay already installed on top of it.

Riding in the lower payload berth is the smaller BRIsat spacecraft, attached to the Vehicle Equipment Bay via its payload adapter. EchoStar 18 was installed atop the Sylda payload adapter and encapsulated in Ariane’s payload fairing before being lowered onto BRIsat to cover the smaller passenger inside the Sylda. Payload integration was complete by May 31, allowing teams to head into the final leg of the VA230 campaign.

While the payload teams placed their respective logos on the fairing, Ariane 5 was undergoing integrated testing ahead of being armed for launch on Monday. The Launch Readiness Review also took place on Monday and cleared the vehicle for liftoff as no outstanding issues were identified.

Rollout was scheduled for Tuesday, but had to be delayed due to a technical problem encountered ahead of moving Ariane 5 to the pad. The anomaly was associated with a fluid connector between the cryogenic upper stage and the launch table. The component will be replaced and re-testing will be conducted before a new launch date is set.

A similar issue occurred on the VA222 mission in April 2015, requiring eight days to set up a new launch attempt.

A new launch date for the record-setting VA230 mission will be announced in the coming days ahead of the rocket’s rollout to the ELA-3 launch pad.