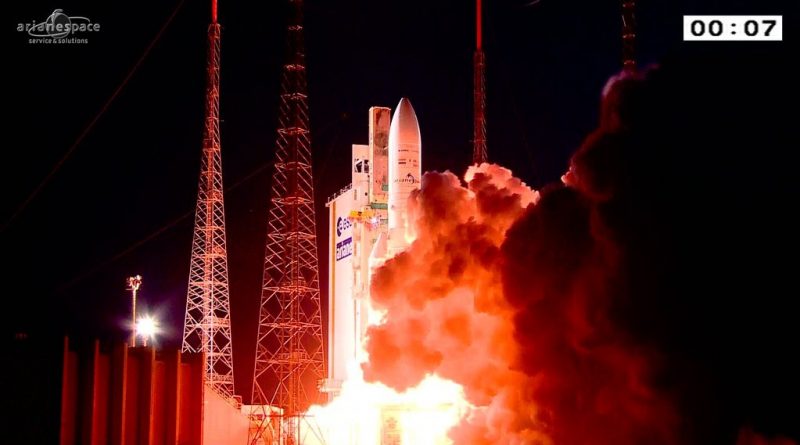 Ariane 5 successfully conducted its year-closing mission on Tuesday, lifting off from French Guiana to carry a pair of communications satellites into orbit in its sixth and final flight of 2015.

Launch occurred at 21:34 UTC, the opening of a 43-minute launch window, to mark the start of a flight also taking 43 minutes to deliver the Badr-7 and GSAT-15 satellite to a highly elliptical Geostationary Transfer Orbit. To check off its 69th consecutive success, Ariane 5 made an on-target delivery of the two satellites to take up station in Geostationary Orbit in the coming days to deliver communications services to Africa, the Middle East and India.

Badr-7, the larger of the two passengers sitting in the upper payload berth, stands 8.5 meters tall and weighs in at 5,798 Kilograms, built by Airbus Defence and Space based on the successful Eurostar 3000 satellite platform. It hosts 27 Ku-Band transponders plus a Ka-Band communications payload to deliver broadcast, broadband and telecommunications services to the Middle East and North and Central Africa, becoming part of an orbital video hot spot consisting of the operational Badr satellites operated by Arabsat.

GSAT-15 was built by the Indian Space Research Organization to become a part of the GSAT fleet of satellites that has been in operation since the early 2000s to deliver a variety of communications services to civilian and government sectors in India. With a mass of 3,100 Kilograms, GSAT-15 is outfitted with 24 Ku-Band transponders that will serve the Indian territory, providing Direct-to-Home television services and supplying comm services to very small aperture terminal (VSAT) operators. The satellite also carries a payload for GPS Aided Geo Augmented Navigation for Safety of Life (SOL) operations benefiting the civil aviation services. The GAGAN payload, operating at the L1 and L5 frequencies, serves the entire hemisphere of Earth that is visible to the satellite. In addition, the satellite hosts two Ku-Band beacons.

The VA227 mission comes after a busy year for the workhorse with a total of six mission, all carrying pairs of heavy satellites into orbit. VA222 was the first Ariane 5 flight of the year, occurring in late April and lofting the Thor 7 communications satellite to orbit to deliver high-speed data services to maritime terminals, and SICRAL-2 used by the French and Italian governments for secure communications. DirecTV-15 and Sky Mexico 1 went up one month later to take up station to deliver coverage to the Americas. In mid-July came the only non-communications satellite launch for the Ariane 5, lifting into orbit the MSG 4 weather satellite for the European Space Agency and EUMETSAT weather agency. It was accompanied by the Star One C4 communications satellite.

Topped with a payload of just under ten metric tons, Ariane 5 headed into its lengthy countdown operation 11.5 hours ahead of the 21:34 UTC launch window opening. Initial countdown operations included preparations for propellant loading and close-outs of the Ariane 5 launcher and pad structures. At L-7.5 hours, the Ariane 5 rocket was activated for an extensive set of tests including checks of the electrical systems, the RF communication system, flight computers, range safety systems and Ground Support Equipment.

Six hours ahead of launch, teams completed final launch pad close-outs before departing the pad for propellant loading. At that time, Ariane 5 underwent control system initialization and received its flight software before the alignment of the Inertial Navigation System. Also, the Attitude Control System was pressurized in preparation for the flight. At L-5 hours, technicians departed the launch complex and cleared the blast-danger area in preparation for propellant loading.

Propellant loading procedures began with the pressurization of ground systems before Liquid Oxygen and Liquid Hydrogen Transfer lines were chilled down. Cryogenics started flowing into the tanks of the first and second stage at around L-4 hours. Over the course of two hours, the first stage was loaded with 133,000 Kilograms of LOX and 26,000kg of LH2.

The EPC core stage is 23.8 meters long and 5.4 meters in diameter equipped with a single Vulcain engine that provides 1,340 Kilonewtons of vacuum thrust. Being loaded via the Cryogenic Feed Arms, the Upper Stage was filled with 14,900 Kilograms of –183-degrees Celsius LOX and –253°C LH2. The ESC upper stage is 4.7 meters long and uses a single 62.7kN HM-7B engine.

Launch vehicle testing continued throughout the countdown and the Vulcain engine on the core stage initiated its chilldown sequence about three hours before launch.

Avionics and battery heaters were activated at that point to keep equipment at a stable temperature. Also, the Vulcain Ignition System’s heaters were activated in preparation for launch. 70 Minutes prior to T-0, final Telemetry, Tracking and Command Systems checks picked up to make sure Ariane was ready for liftoff. At L-30 minutes, the launch team started preparations for the Synchronized Countdown Sequence starting at T-7 Minutes. These final preparatory steps also included the transition of the two satellite payloads to internal power.

The highly choreographed synchronized sequence got underway as clocks passed T-7 minutes. This final countdown sequence features the last crucial reconfigurations that put the 777,000-kilogram launch vehicle into the proper configuration for liftoff.At T-6 minutes 30 seconds, propellant topping to flight level was complete and fueling was terminated. In addition, pyrotechnic safety systems were reconfigured for launch. At T-6:00, the ordnances of the launcher were activated and first stage Helium Loading was ended. Launch vehicle batteries were reconfigured at T-2:30 as the the heaters of the first stage’s avionics and the Vehicle Equipment Bay Batteries were turned off.

The HM-7B engine on the second stage was moved to its pre-deflection configuration and the Vulcain 2 on the Core Stage prepared for its ignition sequence by closing chilldown valves and opening bleeder valves.

One minute before blastoff, the rocket switched to internal power. On-board recorders were activated as the final seconds of the countdown began.

The ignition sequence started at T-37 seconds. The attitude control system on the first stage was enabled and the POGO System that is used to prevent any engine related oscillations was pressurized for flight. Six seconds before ignition, the Cryogenic Umbilical Arms retracted, control was handed over to the launch vehicle’s computers and the Hydrogen Burn-Off System was activated.

Clocks hit zero at 21:34 UTC and the Vulcain 2 engine of the rocket soared to life, throttling up to its liftoff thrust of 97,900 Kilograms. Ignition was carefully monitored by computers to make sure the engine reached operational conditions. With the engine up and running, the ignition command was sent to the Solid Rocket Boosters at T+7.3 seconds.

Upon booster ignition, Ariane 5 jumped off its pad with a total thrust of nearly 1.5 million Kilograms and an initial thrust to weight ratio of 1.8. Providing 92% of the rocket’s total thrust at launch, the boosters delivered an extra kick to the rocket for the first phase of the ascent. Each booster measures 31.6 meters in length and 3.05 meters in diameter holding 237,000 Kilograms of solid propellant.

After 13 seconds of vertical ascent, Ariane 5 initiated its Pitch Maneuver followed by the Roll Maneuver four seconds later. Vehicle control was provided by gimbaling the nozzles of the EAP boosters and the Vulcain 2 engine. By T+32 seconds, pitch and roll were complete and Ariane 5 was on its precisely planned ascent trajectory – headed for an elliptical Geostationary Transfer Orbit. Flying east, Ariane 5 was set for a quick 20-minute trip across the Atlantic Ocean.

50 seconds after launch, Ariane 5 passed Mach 1, 6.8 Kilometers in altitude followed by Maximum Dynamic Pressure one minute and nine seconds into the flight.

Two minutes and 23 seconds into the flight, the two EAP boosters burned out and were separated after helping accelerate the vehicle to 2,007 meters per second. Separation was triggered by the pressure drop inside the boosters signaling they had burned out. Booster jettison took place at an altitude of 67.0 Kilometers, sending the EAPs for a crash landing in the Ocean.

With the boosters gone, the vehicle was only powered by the Vulcain 2 engine of the core stage. The engine provides 136,600 Kilograms of vacuum thrust. Vulcain 2 is 3 meters long, 1.76 meters in diameter and has a dry weight of 1,686 kilograms operating at a chamber pressure of 117 bar.

Three minutes and 24 seconds into the flight, the large payload fairing was jettisoned when the stack reached an altitude of 111 Kilometers. At that point, aerodynamic forces could no longer harm the satellites as the vehicle continued its ride into orbit. Ariane’s fairing is 5.4 meters in diameter and 17 meters long, offering enough space for dual-payload stacks.

The first stage continued to operate until T+8 minutes and 58 seconds when the Vulcain 2 engine shut down at an altitude of 173 Kilometers when the stack was traveling 6.9 Kilometers per second. Stage separation was commanded six seconds later and the pyrotechnic separation system was initiated. At T+9:08, the HM-7B engine of the Upper Stage ignited on a 15-minute and 54-second burn to boost the stack into orbit. HM-7B is 2.01 meters long, has a diameter of 0.99 meters and a dry weight of 165 Kilograms. It provides 6,400kg of thrust. It does not have any throttle range and is only operated at 100% of rated performance. The engine provides a gimbal capability of 3°

Sticking to its planned trajectory, the upper stage performed as advertised. The VA227 mission targeted an insertion orbit of 247 by 35,786 Kilometers at an inclination of 4.0 degrees. Insertion occurred 24 minutes and 56 seconds into the flight at an altitude of 657 Kilometers and a velocity of 9.34 Kilometers per second.

Immediately after upper stage shutdown, the vehicle started using the Hydrazine Reaction Control System to re-orient for the separation of the Arabsat satellite. Just over T+27 minutes into the flight, Badr-7 was released to embark on its own mission that will last for at least 15 years and begins with the ascent of the spacecraft into Geostationary Orbit ahead of the deployment of all appendages to enable several weeks of in-orbit testing to begin.

The separation of the first passenger was followed by an attitude maneuver and the separation of the Sylda payload adapter at T+30 minutes to expose the second passenger that was riding into orbit under the Sylda which allows Ariane 5 to boost two satellites into orbit in a stacked fashion. GSAT-15 was sent on its way at T+43 minutes, marking the conclusion of the primary mission of the Ariane 5, and the start of a busy phase for the Indian satellite operators who will raise the spacecraft’s orbit over the coming days.

Tuesday’s launch marked the 83rd mission for the Ariane 5 rocket since its inauguration in 1996, the 53rd in its ECA configuration. It was the 69th consecutive success for the launch vehicle. For Arianespace, two more missions are planned before the end of the year using the Vega rocket to launch ESA’s LISA Pathfinder mission and the Russian Soyuz launcher to loft the next pair of Galileo Navigation Satellites.