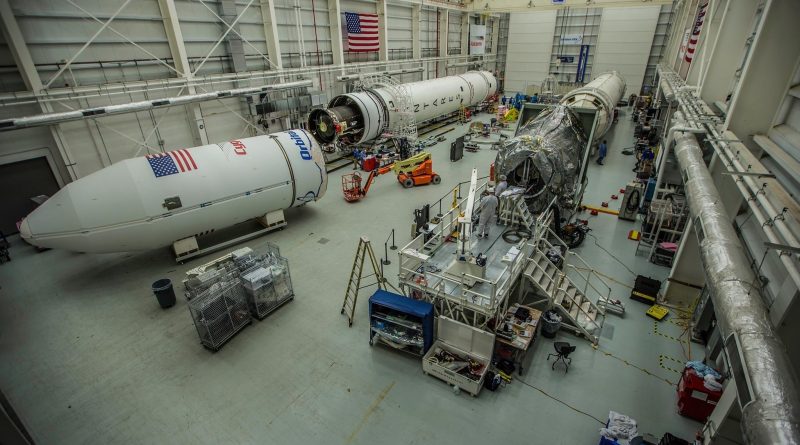 The long-awaited Return to Flight mission of Orbital ATK’s Antares rocket with the company’s Cygnus cargo craft has been re-aligned for a Sunday night liftoff from Wallops after a long path to ready the revamped booster for liftoff following a dramatic launch failure nearly two years ago.

Liftoff is currently set for 0:03 UTC on Monday, 8:03 p.m. local time Sunday night to mark the start of a two-and-a-half-day link-up of Cygnus with the International Space Station to deliver 2,350-Kilograms of cargo and perform the second in a series of high-profile in-space fire experiments.

It was a very long road for Orbital ATK and the Wallops Flight Facility to return back to spaceflight business after the October 28, 2014 Antares launch failure. Rising from its launch pad just after sunset, Antares was in the midst of is vertical climb when, only seconds after liftoff, one of its AJ26 engines suffered a catastrophic failure, likely caused by a material defect in the high-pressure liquid oxygen pumping equipment of the engine.


Antares, engulfed in a blaze of fire, fell back to its launch complex and, upon impact, caused a massive blast that was followed by a lengthy fire as the solid propellant of the rocket’s second stage burned.

Orbital ATK (then Orbital Sciences) was planning to move away from the converted Soviet engines before the accident occurred given their age as well as their limited supply as only 43 NK-33 engines were imported to the U.S. for conversion by Aerojet Rocketdyne. After the dramatic launch failure, Orbital decided to accelerate the switch in engines and no longer fly the Antares rocket with the converted powerplants.

The Antares failure marked the start of a particularly unlucky streak for ISS cargo as it was followed by the loss of the Russian Progress M-27M cargo craft damaged at separation from its Soyuz rocket in April 2015 and the failure of SpaceX’s Falcon 9 in June 2015 claiming the loss of the Dragon SpX-7 cargo craft.

Re-fitting the Antares with new engines was a lengthy process and an alternate launch vehicle had to be found to keep up the company’s obligations to NASA for the delivery of cargo to the International Space Station.

To bridge the lengthy gap in Antares launches, Orbital ATK contracted United Launch Alliance for a pair of Cygnus missions in December 2015 and March 2016 using the Atlas V rocket and taking advantage of that launcher’s performance to fill the spacecraft to the brink with over three metric tons of cargo on both of its interim missions.

Within two months of the 2014 launch failure, Orbital announced the company selected the Russian RD-181 engine for the Antares 200 series. The NPO Energomash Engine is compatible with the existing Antares core stage, using the same mixture ratio as the AJ26 and only requiring adjustments to the engine interface on the business end of the rocket to fit the new engines.

RD-181 can be considered the smaller brother of the RD-180 also imported to the U.S. to power the Atlas V’s first stage sporting a pair of combustion chambers. With only one chamber, RD-181 is an adaption of Russia’s RD-191 engine featuring some structural changes to permit integration with Antares. Both, RD-191 and RD-180 find their origin in the even larger RD-170/171 with four chambers, used on the Energia and Zenit rockets.

Pad 0A at the Mid-Atlantic Regional Spaceport was damaged when Antares fell back onto its launch facility, requiring nearly a year for repairs.

None of the pad’s structural systems received damage in the accident and repairs were limited to the above-ground piping for propellants and commodities as well as other ground support systems such as lightning towers.

The $15 million repairs at the launch pad were finished in September 2015, transitioning the facility back to a functional state to support Antares missions.

The first RD-181 engines were delivered to Wallops in mid-2015 and an Antares 200 series core stage was rigged up for a test firing of the new Main Engine System. The test, performed on May 31st of this year, was done to check the compatibility of the launch vehicle with the new engine system, uncovering any adverse modes that could affect the outcome of a successful mission.

Analysis of data from the 30-second test firing showed the new engine system caused a potentially harmful vibration environment on the vehicle that could impact the operation of the rocket’s avionics.

Addressing the issue, Orbital ATK pushed the Cygnus OA-5 from an August target into early October, also closing out other items found in the static test firing.

Ramping up operations for the OA-5 launch, Cygnus – assembled back in June and already loaded with most of its cargo – was moved from the Wallops main base to Wallops Island for final processing on September 19. In the days that followed, Cygnus was loaded with propellants and teams placed late cargo load items into the vehicle before closing and sealing the Common Berthing Mechanism Hatch.

The initial launch target of October 13 did not stand for long due to an issue occurring with the installation of Cygnus atop the Castor XL second stage of the Antares – requiring a one-day delay.

With the launch slipping to Friday night, teams were faced with another potential problem in the form of Tropical Storm Nicole that grew to a Hurricane this week and is expected to reach peak strength when moving over the island of Bermuda on Thursday.

NASA operates a mobile Tracking Station on Bermuda that was first deployed for the inaugural Antares launch in April 2013. With Bermuda forecast to receive strong winds and rain Thursday and Friday, it was decided to close down the tracking station to ride out the storm before being re-activated for the OA-5 mission Sunday night. During the mission, Bermuda is responsible for tracking the upper stage burn and the separation of the Cygnus spacecraft from the launch vehicle.

Whether liftoff on Sunday will be possible depends on how the tracking equipment and the overall infrastructure in Bermuda fares in winds forecast to reach around 170km/h.

NASA is eager to welcome Cygnus OA-5 on board ISS since Orbital ATK is currently the only Commercial Resupply Services provider that is in a position to fly cargo to ISS. Its counterpart SpaceX is currently standing down due to the explosion of the Falcon 9 rocket on September 1st when counting down to a Static Fire Test.

However, there is no rush from an ISS supplies point of view. Barring any major failures in the Station’s life support systems, supplies currently on board will last through January 2017, the limiting factors being water and food. Prior to dipping into reserve supplies in early 2017, ISS is scheduled to be visited by Cygnus, Progress MS-04 and HTV-6 with Dragon hoped to return to flight before the end of the year as well.