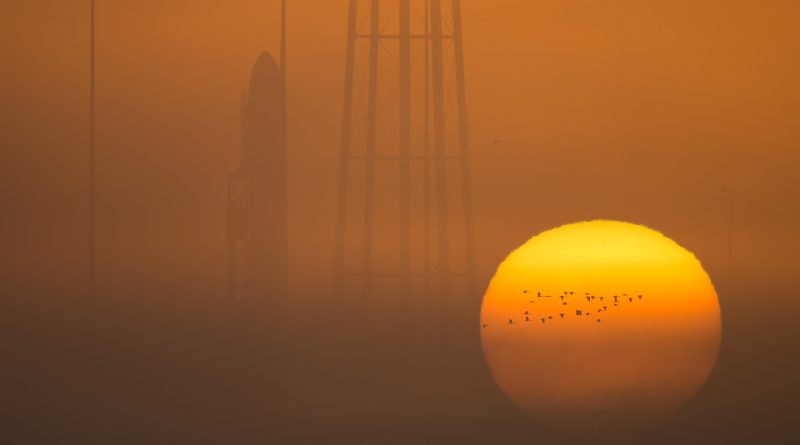 The launch of Orbital ATK’s long-awaited Antares Return to Flight mission to restore the company’s cargo launch capability to the Space Station was postponed on Sunday due to an uncooperative cable within the rocket’s ground support equipment, requiring replacement ahead of the next launch attempt on Monday at 23:40 UTC.

The delay was called seven hours ahead of Sunday night’s scheduled launch attempt after testing revealed a defective cable on the ground support side. Orbital ATK issued a statement confirming spares were on hand and the replacement and associated re-testing could be completed to set up another attempt on Monday.

The Antares 230 launch vehicle and Cygnus spacecraft remain in a safe configuration, according to Orbital ATK, as countdown operations had not yet proceeded into launch vehicle power-up or propellant loading when the anomaly was discovered.

With liftoff slipping to Monday – pending resolution of the problem – Cygnus will be looking at an extended rendezvous with the International Space Station due to inbound crew traffic later in the week. Soyuz MS-02 with the Expedition 49/50 crew is aiming for liftoff at 8:05 UTC on Wednesday from the Baikonur Cosmodrome and its planned two-day rendezvous will take priority over the inbound cargo mission.


If launching on Monday, Cygnus will conduct initial orbit-raising maneuvers before entering an extended loiter at a safe distance to the Space Station to allow Soyuz to complete its rendezvous with docking expected around 9:59 UTC on Friday.

When Soyuz is safely attached to ISS and the crew restored to six, Cygnus will be commanded to begin its approach for a robotic capture next Sunday around 11 UTC.

Cygnus is capable of extended free flight missions of several weeks. In the specific case of OA-5, Cygnus can loiter for 20 to 40 days and still complete its nominal cargo-delivery mission to the Space Station.

While easily facilitated from a technical standpoint, Sunday’s delay does put additional pressure on an already congested schedule for the Space Station. The handover between the ISS Expedition 48/49 crew members currently in orbit and the new arrivals is only expected to be nine days in duration due to a four-week delay to the Soyuz MS-02 mission.

Fitting a Cygnus rendezvous into an already packed handover schedule will mean some weekend work hours for the crew.

However, crews are usually eager to welcome fresh supplies and new experiments on board and will be available to support the Cygnus arrival at the earliest possible time after the October 21 Soyuz docking. Cygnus is loaded with over 2,300 Kilograms of hardware, consumables and science experiments for the ISS Expedition 49/50 crew.

Antares – the most powerful rocket ever launched from the Wallops Flight Facility in Virginia – is coming back from a stand-down of nearly two years following the dramatic Oct. 28, 2014 launch failure that claimed the loss of the Cygnus Orb-3 Cargo Spacecraft and caused considerable damage to the launch facility when the launch vehicle impacted close to the pad after suffering a catastrophic engine failure a few seconds after lifting off.

In the wake of the failure, Orbital decided to accelerate plans to fit Antares with new engines, stepping away from the AJ26 engines that were only available in limited supply and were identified to be the cause of the dramatic mishap. Now sporting two NPO Energomash RD-181 engines, Antares is expected to be more reliable and can lift more cargo into orbit given the engine’s better performance.

A pair of flights of the new Enhanced Cygnus spacecraft were performed using United Launch Alliance Atlas V rockets in December and March to keep up Orbital ATK’s obligations to the ISS Program before returning the Antares to regular launches.