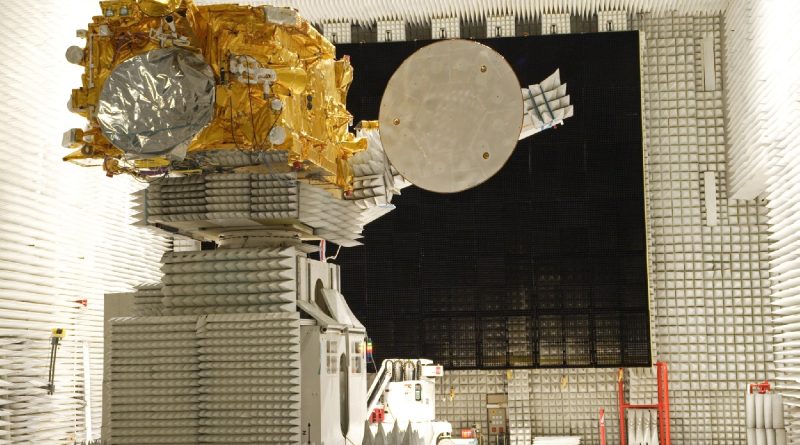 The stricken AMC 9 communications satellite that suffered a sudden and unexpected anomaly on June 17 has shed at least four pieces of debris according to information from the U.S. Air Force and private tracking firm ExoAnalytic Solutions. Although the satellite’s operator SES managed to re-establish communications with the craft, the liberation of debris underlines the serious nature of the anomaly.

Luxembourg-based operator SES confirmed on June 18 that the company’s 14-year old AMC 9 communications satellite suffered “a significant anomaly” in the morning of June 17, characterized by a sudden loss of communications from the spacecraft as it later became known. SES immediately put plans in motion to move customers to other satellites to minimize the interruption in services and satellite manufacturer Thales Alenia went into action to diagnose the issue and work out potential recovery steps.

The June 17 event was associated with a sudden change in the satellite’s orbit, nudging the craft from a perfectly stationary orbit at 83 degrees West into a drift orbit of 35,615 x 35,984 Kilometers, moving westward at around 0.17 degrees per day. Analysis showed the anomaly imparted a change in velocity of 17 meters per second to the satellite, indicating some type of energetic event had transpired.


On June 29, the Joint Space Operations Center informed SES that it was tracking at least two objects that likely liberated from the AMC 9 satellite. Private tracking firm ExoAnalytic, operating an array of telescopes for visual Space Situational Awareness data collection, noted its data showed potential debris from the satellite as early as June 17 around 7:24 UTC – right at the time the anomaly occurred.

An ExoAnalytic video released by Ars Technica shows the satellite’s brightness varying with time, indicating AMC-9 had entered a tumbling motion and was no longer in three-axis control. Multiple bright flares of the satellite could be observed and one was associated with the release of at least four debris pieces, one large and three smaller pieces floating away from the satellite in different directions.

One possible explanation for the emergence of debris could be the satellite’s tumble, one fairly recent example being Japan’s Hitomi space observatory that literally spun itself apart.


The presence of a fairly bright (i.e. large) piece of debris is particularly disconcerting with respect to the satellite’s health as it could suggest AMC 9 lost one of its sizeable external appendages like a solar array or antenna reflector. As of July 2, SES and Thales did not yet know what may have caused the pieces to break off, though systems telemetry – if available – should provide insight into any missing appendages.

It is not clear what may have caused the anomaly in the first place. Possibilities include an intrinsic event like a breach in a pressurized system (e.g. pressurant tank, propellant line, stuck thruster), battery explosion, broken heat pipe; or an external cause like a debris or meteoroid strike.

In the early hours of July 1st, SES Satellite Control re-established contact with AMC 9, but regaining contact does not automatically mean the satellite can be brought back under control. However, it provides invaluable insight into the craft’s onboard systems to assist in working out which systems were affected by the anomaly and whether three-axis control can be restored.

Tracking data from Monday morning shows the satellite in an orbit of 35,630 by 35,976 Kilometers, inclined 0.016 degrees. As of Monday morning, AMC 9 was at 85.7° West, continuing to drift westward at 0.21 degrees per day. Since the anomaly occurred, AMC 9 already passed through the neighborhood of six satellites holding position in the Geostationary Belt. No tracking data is available for any debris that may have originated from AMC-9.

“All relevant operators and agencies are being kept informed and will receive regular updates from SES,” the company said in a statement. “The current assessment is that there is no risk of a collision with other active satellites. AMC-9 and its status continue to being tracked by SES and agencies, including the Joint Space Operations Center (JSpOC) and ExoAnalytic, a private firm and tracking service provider.”

SES also noted the company was able to restore customers capacity via alternative satellites with the majority of traffic having been restored by late June 18, a day and a half after the anomaly occurred. AMC 9’s payload was successfully disabled to avoid frequency interference with other satellites as the satellite drifts past.

The company is also taking steps to move additional assets to 83 degrees West to support customer requirements and mitigate effects of the anomaly. The potential impact of the AMC 9 failure, should the satellite be a complete write-off, will be less than €20 million and there will be a one-off impairment charge of €38 million, SES says.

Given the satellite’s current situation with a loss of three-axis control and debris liberating from the craft, it is highly unlikely that AMC 9 can re-enter services. The prime objective for Thales and SES will likely be to regain sufficient control for a targeted maneuver into a graveyard orbit 200 to 300 Kilometers over the GEO belt without shedding any additional debris into the operational GEO zone that is already cluttered with some 1,500 sizeable debris pieces.

Typically, Geostationary satellites complete a maneuver at the end of their operational lives to move around 300 Kilometers above the GEO Belt where they will remain virtually indefinitely without posing a threat to active communications, weather and military satellites.

AMC 9, built by Alcatel Space (now Thales Alenia Space) based on the Spacebus-3000B3 platform, launched atop a Russian Proton rocket in June 2003 and was expected to operate for at least 15 years, delivering services to the United States, Mexico and the Caribbean. The satellite hosts 24 C-Band and 24 Ku-Band transponders for the provision of television distribution and communications services to government organizations and companies.

The industry-standard for Geostationary Communications satellites is a 15-year life time, but it is not common for satellites to outlive that expectation and continue operating several years longer; some satellite even reach their twenties. However, occasional failures before the 15-year mark is reached have not been unheard of, the most recent high-profile case being the Israeli AMOS-5 satellite that has been drifting since November 2015 and has already traversed a stretch of 100 degrees.