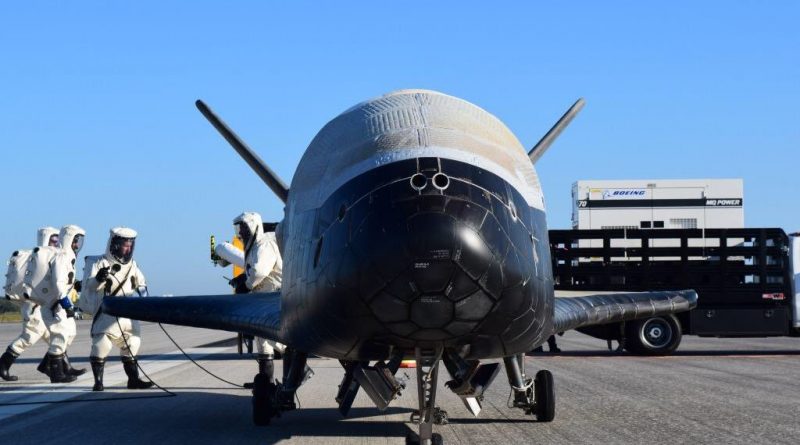 Known as Orbital Test Vehicle 4 or OTV-4, the hush-hush mission set a record for the longest flight of the winged spacecraft and marked the first landing in Florida after the previous three missions used a runway in California.

No advance warning was given for Sunday’s landing and residents on Florida’s central coast were surprised by a single sonic boom, heard as far as Orlando to announce the X-37B’s speedy homecoming after a mission of 717 days and ~21 hours.

The fourth mission of the X-37B, the second for this particular vehicle, began on May 20, 2015 when OTV-4 enjoyed a smooth ride atop a United Launch Alliance Atlas V 501 rocket that sent the craft into a classified Low Earth Orbit. As is typical for the semi-classified X-37B, only very few details on the craft’s mission were released and no information was given on OTV-4’s orbit and the progress of the flight – let alone plans for the craft’s return to Earth.


A global community of satellite trackers sprung into action when X-37B launched to spot the craft in orbit and keep tabs on potential orbital maneuvers which have occurred at different frequency over the course of the previous missions. Within six days of liftoff, OTV-4 was spotted in a relatively low orbit of 312 by 325 Kilometers at an inclination of 38 degrees. While the altitude of previous X-37B missions has widely varied, all three missions prior to OTV-4 had used an inclination between 40 and 43 degrees.

Satellite watchers lost track of OTV-4 in August 2015 when the spacecraft maneuvered into a higher orbit and the vehicle was spotted again in October of that year, orbiting at 349 x 357 Kilometers – in line with the OTV-2 mission that kept a similar altitude for most of its flight. For the majority of the OTV-4 mission, X-37B maintained an apogee altitude of 355 Kilometers while the perigee was allowed to gradually drop to 325 Kilometers.

The vehicle remained in this orbit for the entirety of 2016 – similar to the previous two X-37B flights that stuck to a constant orbit for the majority of their missions while OTV-1 kept satellite trackers busy with frequent orbit changes in 2010.

In February 2017, OTV-4 went missing again – this time as the result of an orbit-lowering maneuver as became clear later that month when the vehicle was spotted in a 307 by 320-Kilometer orbit. At the same time, personnel at the Kennedy Space Center completed a rehearsal for the spacecraft’s landing – taken by some as an indication the vehicle would be coming back soon, though X-3B continued orbiting steadily, moving back into a 320 by 337-Kilometer orbit.


By the end of March, OTV-4 had surpassed the 675-day mark in its mission, setting the new record for the longest X-37B mission and well eclipsing what once was a planned design life of 270 days when the spacecraft entered its development in the early 2000s.

X-37B took flight for the first time in April 2010 on a shakedown mission lasting 224 days and ending with the first autonomous runway landing by an American orbital vehicle. The second flight of the X-37B already surpassed the 270-day mission duration and lasted 468 days in 2011/12. The 674-day OTV-3 mission was the second flight of the first X-37B craft after undergoing refurbishment and the OTV-4 mission marks the second deployment of the second production vehicle.

The first three missions of X-37B used Vandenberg Air Force Base as the main processing site for the vehicle before operations were shifted to the Kennedy Space Center in late 2014 when Boeing acquired former Space Shuttle Orbiter Processing Facility 1. A prominent sign reading “Home of the X-37B” has been placed on OPF-1, indicating the facility is fully equipped to handle pre- and post-flight processing of the winged space planes – moving the launch and landing of the vehicle to the same location and avoiding costly cross-country trips.

No indication or warning of the X-37B’s impending homecoming was given prior to Sunday, however, speculation during the mission was that the spacecraft would likely come back on a Sunday morning when activity at the Kennedy Space Center is at its lowest – avoiding too many eyes on the vehicle as it is moved from the runway to its processing facility.

It is unknown whether OTV-4 made the typical orbit-lowering maneuvers that preceded the homecoming of the three previous missions, satellite trackers did not see the vehicle since April 25.

X-37B is only the second orbital spacecraft that can autonomously land on a runway, the other being the Soviet Buran which only enjoyed one flight to space in the 1980s. Sierra Nevada’s Dream Chaser – currently preparing for free flight testing in California – is also being designed for autonomous runway landings, although the craft could also be piloted manually if a crew is on board.


Sunday’s landing was preceded by a precisely targeted deorbit burn that placed the X-37B on a sub-orbital arc, intercepting the atmosphere at a pre-planned location from where it could reach Florida’s Space Coast. The ascending-node landing ground track took the spacecraft over Central Mexico, south of Mexico City ahead of passing over the Gulf of Mexico and landfall over Florida south of Tampa/Clearwater. Flying on autopilot, guided by GPS, the X-37B executed a series of bank maneuvers to dissipate energy and touched down just before 8 a.m. local time, 12 UTC per reports of a single sonic boom felt around Cape Canaveral and audible as far as Orlando.

Engineering teams in hazmat suits approached the spacecraft shortly after rolling out to hook X-37B up to ground power supply and cooling systems ahead of transferring the vehicle to Orbiter Processing Facility 1 where post-landing safing will be completed and items can be extracted from the craft’s payload bay after spending nearly two years in space.

With Sunday’s landing, the two reusable X-37B spacecraft have amassed 2,086 cumulative in space. Whether a fifth mission is planned and when it will occur is unknown as of the end of the OTV-4 flight.

Making its first landing at the historic Shuttle Landing Facility, X-37B highlights efforts to transform the Kennedy Space Center into a multi-user spaceport with different vehicles sharing launch, landing and processing infrastructure at America’s prime space launch site. The 4,600-meter long Shuttle Landing Facility is situated on Merrit Island and hosted 78 landings of the Space Shuttle between 1984 and 2011.

Built by Boeing Phantom Works, the X-37B spacecraft is 8.9 meters long, has a wingspan of 4.5 meters and weighs around five metric tons at liftoff. It is powered by a solar array that deploys from the vehicle’s 2.1 by 1.2-meter payload bay after the clamshell-type doors open shortly after arriving in orbit. Maneuvering thrusters on the nose and tail are used to control the craft’s orientation in space and a large main engine in the back of the craft is used for orbital maneuvering and the deorbit burn.

The exact objectives of the OTV-4 mission were not disclosed to the public, but contrary to previous missions, details on two of the experiments hosted within the craft’s payload bay were released:

The test was to involve operation of the thruster over an extended period of time to learn about any degradation that may occur in the space environment through analysis of telemetry gathered from the thruster and data from OTV’s accelerometers, measuring the thrust delivered by the system. Aerojet Rocketdyne issued a statement back in July 2015 noting the thruster had completed initial on-orbit validation testing aboard the X-37B.

The second publicly known payload hosted by OTV-4 is a materials science experiment operated by NASA. The Materials Exposure and Technology Innovation in Space, METIS, experiment exposed an array of nearly 100 different material samples to the space environment to study the response of the various materials with special focus on degradation as a result of ionizing radiation and metal corrosion by atomic oxygen in Low Earth Orbit.