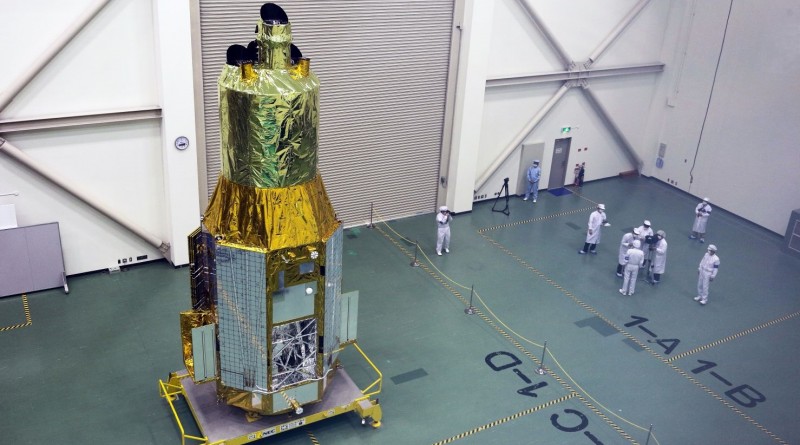 Japan’s Astro-H X-Ray Observatory is set for liftoff atop an H-IIA rocket on Wednesday after several days of weather-related delays. Launch from the Tanegashima Space Center is set for a 45-minute window opening at 8:45 UTC to mark the start of a 37-minute ascent mission to reach an orbit over 500 Kilometers in altitude from where the Astro-H spacecraft will deliver the sharpest energy measurements for high-energy X- and gamma-rays.

Astro-H, weighing in at 2,700 Kilograms, hosts four telescopes combining imaging detectors with spectrometers sensitive in the soft and hard X-ray spectrum to deliver imagery of x-ray sources and extract high-resolution energy spectra for the same targets. Additionally, the spacecraft is outfitted with a Soft Gamma-Ray Detector to cover the high energy regime with high sensitivity and resolution.

Employing pairs of telescopes for soft and hard X-rays enables the observatory to deliver high-resolution spectral data of targets while simultaneously delivering X-ray imagery of the same sources. The detectors are expected to deliver the highest energy resolution ever achieved in measurements at energies of 3 to 100 Kilo-Electronvolt. This is possible through the use of microcalorimeter detectors that, compared to the CCD detectors used in previous missions, have a far better energy resolution. Astro-H would become the first craft to successfully employ such a detection system in an orbital mission after several sub-orbital flights and failed orbital missions.

ChubuSat 2 and 3 each weigh approximately 50 Kilograms and hosts imaging and communications payloads. The spacecraft host visible imaging payloads for Earth imaging at a resolution of around ten meters. Infrared cameras are employed to study a technique for monitoring space debris and the satellites are outfitted with a radiation detector system to examine radiation from the sun and Earth.

Horyu 4, also known as AEGIS – Arc Event Generator and Investigation Satellite, is planned to carry out a demonstration mission of ten payloads. The primary objective is the demonstration of High-Voltage Solar Arrays and associated plasma mitigation techniques. Also, the satellite compares the degradation of different solar cell coatings, tests a vacuum arc thruster system, and deploys a material science experiment to orbit evaluating the response of different polymers to prolonged exposure to space.

The Astro-H spacecraft made its way to the Tanegashima Space Center in late 2015 and the H-IIA rocket was assembled by its operator Mitsubishi Heavy Industries in late December starting with the installation of the 37-meter tall core stage followed by the installation of the cryogenic second stage and the two SRB-A solid rocket boosters. Fueled for flight and fully checked out, Astro-H was handed over by JAXA for installation atop the launch vehicle, along with the secondary payloads hosted by adapters installed around the primary payload adapter system.

Liftoff was originally scheduled for Friday but was pushed due to an unfavorable weather outlook calling for persistent winds and adverse weather with clouds containing a freezing layer, causing violations of weather criteria over the weekend and into this week. JAXA announced on Sunday that the launch was rescheduled for Wednesday after forecast models showed weather would clear up by mid-day on Tuesday, permitting an overnight rollout and countdown to set up for liftoff on Wednesday.

Launch Vehicle Ordnances will be armed at X-30 Seconds and the Guidance System of the Vehicle is being switched to Flight Mode 12 Seconds later before the sparklers underneath the LE-7A main engine ignite to burn off residual Hydrogen.

Ignition Sequence Start is commanded at X-5.2 Seconds and the LE-7A Engine soars to life as the turbopumps spin up to flight speed being monitored by on-board computers to make sure the engine is healthy before the booster ignition command is issued at T-0 – committing the vehicle to launch.

At the moment of booster ignition, the H-IIA rocket leaps off its pad with a total thrust of 571,000 Kilogram-force with the two boosters delivering 76% of the total thrust at liftoff, delivering the extra kick needed to send Hayabusa 2 on its way. H-IIA will make a short vertical ascent before beginning to pitch and roll in order to get aligned with its precisely planned ascent path taking the launch vehicle to the south-east for a trip across the Pacific Ocean. On its way uphill, H-IIA quickly passes Mach 1 and Maximum Dynamic Pressure.

The two boosters burn until T+1 minute and 39 seconds – burnout will be sensed by the declining pressure in the combustion cambers. Booster jettison occurs at T+1:48 as both SRBs separate simultaneously after completing their job of helping accelerate the vehicle to 1.5 Kilometers per second. Booster separation is performed at an altitude of 56 Kilometers.

Powered flight continues on the LE-7A engine of the first stage alone. The engine delivers 109,300 Kilogram-force of thrust, burning about 260 Kilograms of cryogenics per second.

Shutting down its LE-7A engine, the first stage is separated at T+6:46 at an altitude of 322 Kilometers and the second stages prepares for its first burn that is planned to begin six seconds after staging. Achieving its full thrust of 13,970 Kilogram-force, the second stage will burn its LE-5B engine for six minutes and 32, directly delivering the vehicle to its target orbit. The flight profile during first stage flight has been designed to use a lofted trajectory to quickly gain altitude so that the second stage can reach a nearly circular orbit over 570 Kilometers in altitude at an inclination of 31 degrees.