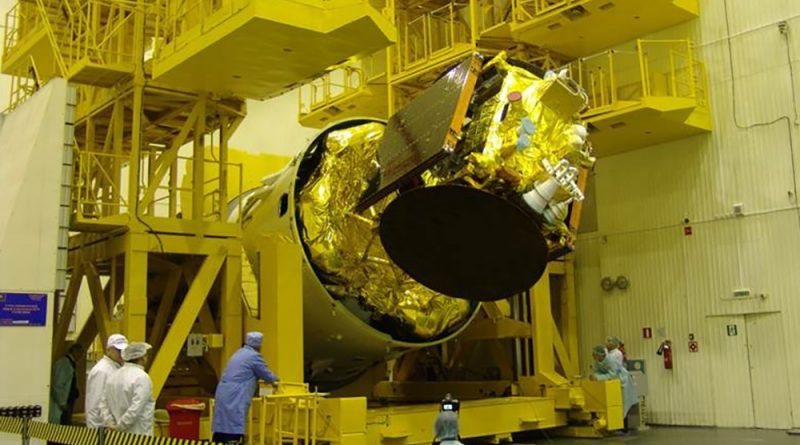 The Russian-built AngoSat-1 communications satellite has been officially declared lost this week after repeated attempts to revive the crippled spacecraft had been in vain. The Angolan Government, which had hoped to use the satellite for TV distribution and telecommunications, declared the satellite a total loss on Monday and said it accepted a proposal from the Roscosmos State Corporation to provide a replacement at no cost to Angola, to be readied for launch before the end of 2019.

AngoSat-1, set to become the first Geostationary Communications Satellite of the African nation, lifted off from the Baikonur Cosmodrome on December 26, 2017 atop a Russian-Ukrainian Zenit rocket. The initial boost provided by the Zenit went as planned and the rocket’s Fregat-SB upper stage was then tasked with a mission of nearly nine hours to inject the satellite directly into a drift orbit over the equator from where the satellite was to move into its operational location to begin serving Angola’s telecommunications needs for a mission planned to last 15 years.


Separating from its booster eight hours and 55 minutes after launch, AngoSat-1 appeared well on its way – successfully establishing three-axis control and deploying its two power-generating solar arrays. However, communications with the satellite suddenly ceased 42 minutes after the craft’s separation, according to press reports emerging the day after launch. On December 29, satellite builder RSC Energia reported that contact had been restored and all onboard parameters were normal; unconfirmed press reports claimed that the anomaly was pin-pointed to an unexpected depletion of the satellite’s batteries.

Contrary to RSC Energia’s statement of control having been re-gained, AngoSat-1 remained without any signs of orbital activity and continued into January drifting in its injection orbit that carried it around three degrees to the west each day. The spacecraft passed its planned operational position on January 9 and continued to drift passively, without signs of activity by its Electric Propulsion System.

On January 15, RSC Energia issued a press release stating the company had diagnosed the problem within the satellite’s Electrical Power System and would allow the spacecraft to continue in its present orbit to avoid interfering with it as it was just about to exit the visibility zone of the Russian Tracking Network. According to the press release, the satellite was to re-enter ground station range in mid-April; however, outside observers interpreted this as putting off the announcement the satellite was beyond salvation until after the Russian Presidential Election on March 18.

Contradictory reports emerged in Russian and Angolan press in March, citing Russian officials expressing various degrees of hope that AngoSat would be able to start operations in April. However, when the satellite re-entered the range of ground stations, it remained silent, even after commands prepared over the past three months were transmitted into the blind. Tass reported on April 15 that two-way communications could not be established and experts came to the conclusion that AngoSat -1 was inoperative for good. Some reports also appeared to confirm that most involved with the mission were aware in January that signs of life from the satellite were highly unlikely.


Articles began floating in the press around the same time that Roscosmos was working on a face-saving solution of working out the financial details of an AngoSat replacement satellite.

On Monday, the Angolan Government officially declared AngoSat-1 a total loss after it apparently encountered a fatal problem within its first hour of free flight. RSC Energia and Roscosmos issued a somewhat vague press release stressing the Russian side will work to fulfill all obligations by providing Angola with capacity on other satellites while beginning work on AngoSat-2.

Angola accepted the Russian proposal of realizing AngoSat-2 without any additional cost to them as the satellite’s construction will be covered with a $121-million insurance payout from the lost AngoSat-1 while the rest will be paid by the Russian government which will also procure the mission’s launch service.

“The parties discussed the terms of an additional agreement to the current contract, which was signed by the parties on April 23 and agreed to start work on the development of Angosat-2 spacecraft – the upgraded version of Angosat-1 satellite,” RSC Energia said. “RSC Energia confirmed its intention to fulfill all contractual obligations to participate in the development of the satellite communication and broadcasting system of Angola.”

According to officials, construction on AngoSat-2 is expected to be completed within 18 months and the replacement is planned to have higher capabilities than its predecessor. While AngoSat-2 undergoes assembly, Russia will make analogous frequency resources in C- and Ku-Band available to Angola as immediate replacement capacity for the lost AngoSat-1.

No details on the failure mechanism that transpired shortly after AngoSat-1 arrived in orbit were provided by Energia, though the company said an investigation into the root cause of the failure was expected to be underway through early May.

As of the latest tracking data, AngoSat-1 remained in an orbit of 35,976 by 36,101 Kilometers, inclined 0.3 degrees – drifting westward at 3.2 degrees per day in an orbit just above the Geostationary Belt where the world’s high-altitude communications, weather and reconnaissance satellites reside. Its orbit takes AngoSat-1 to within 180 to the GEO Belt, staying well clear of any active satellites for the time being.

AngoSat-1 is, however, violating the GEO Protected Region that stretches from 200 Kilometers below to 200 km above the GEO Belt and is ideally to be kept free of any debris if it can be avoided. Though, AngoSat-1 is by no means the only dead satellite wandering through these areas and there are a number of sizeable debris pieces drifting much closer to operational assets in GEO.

Now a dead satellite, AngoSat-1 will be subject to the natural orbital dynamics of the near-GEO regime, including the gravitational influence of Earth and outside factors like solar radiation pressure. Earth’s gravitational field will cause a gradual increase in the orbit’s inclination which has already climbed from 0.03 to 0.3 degrees since it launched in December.

AngoSat-1 was based on Energia’s Universal Satellite Platform and hosted a hybrid communications payload built by Airbus Defence and Space, comprising 16 physical C-Band and six Ku-Band transponders for TV distribution and telecommunications focused on Angola. The USP Platform has been employed by four Yamal commercial communications satellites in 1999 and 2003, has since undergone modernization and is currently flying on Russia’s Tundra missile warning satellites and various communications satellites. Yamal-101, launching together with Yamal-102 on a Proton rocket in 1999, experienced a failure in its electrical system at the time of solar panel deployment – a very similar pattern of what was seen on AngoSat 1 if press reports hold true. Launched in 2003, Yamal-201 failed ten and a half years into its expected 12.5-year service life.