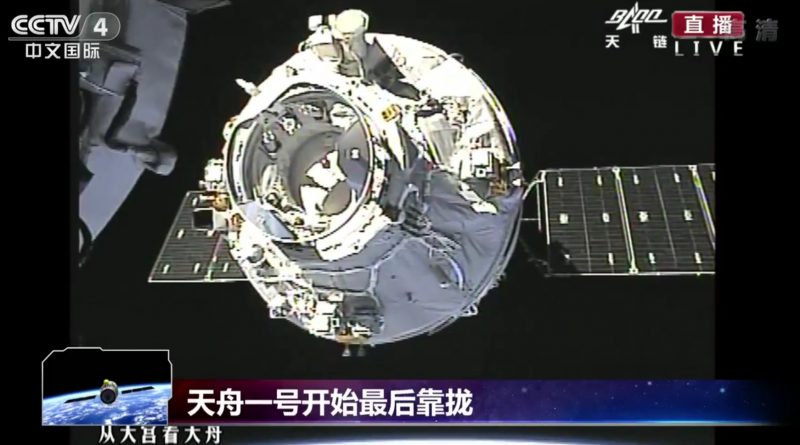 
Forming China’s largest orbiting complex, Tiangong-2 and Tianzhou-1 will remain docked for several weeks, facilitating a series of checkouts including the first transfer of propellant from Tianzhou’s tanks to the partially empty tanks of the TG-2 vehicle – marking an important objective of the mission to ensure the Chinese Space Station (CSS) can be refueled in orbit to stay operational for many years.


The Tianzhou-1 mission marks the conclusion of China’s second phase in a multi-decade program that aims to establish a permanent human outpost in Earth Orbit for ground-breaking science and as stepping stone toward crewed exploration of the Solar System.


The Tiangong-2 spacecraft, although appearing identical to TG-1 from the exterior, implemented lessons learned from the two missions visiting Tiangong-1 – ranging from straightforward changes like adding more and better positioned hand & footholds, to more complex modifications like the addition of noise reduction systems to make the crew environment more friendly. Astronauts Jing Haipeng and Chen Dong visited Tiangong-2 in October aboard their Shenzhou-11 spacecraft, setting a new record for China’s longest crewed space mission and working through a busy schedule of scientific experiments.