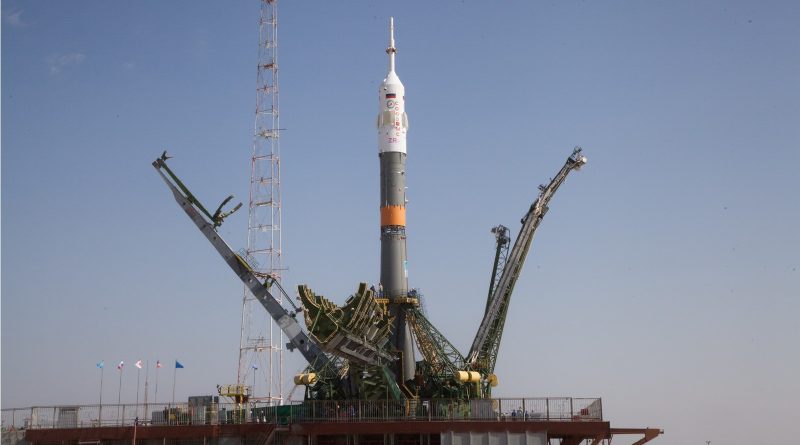 Russia’s Soyuz rocket rolled out to its Launch Pad at the Baikonur Cosmodrome on Monday in preparation for liftoff with three Space Station crew members in the early hours on Thursday.

Second-time Soyuz flier Anatoli Ivanishin and first-time flight engineers Takuya Onishi and Kate Rubins are continuing to work toward a liftoff at 1:36 UTC on July 7 to begin a half-year ISS mission.

The Soyuz rocket, having completed final assembly on Sunday, emerged from the MIK-112 processing facility at the traditional early morning hour, dating back to the rollout of Yuri Gagarin’s Vostok in 1961. Completing its ride on rails, the 49.5-meter tall Soyuz was placed into its vertical position for liftoff, towering atop the historic 1/5 launch pad that supported over 500 Soyuz launches over a six-decade span.

The Soyuz MS-01 prime crew did not attend Monday’s rollout, as is tradition since it is considered to bring bad luck. Backup crew members Oleg Novitskiy, Peggy Whitson and Thomas Pesquet were present for the rollout and watched Soyuz go vertical on its launch pad.


Monday’s rollout marked the start of a two-day processing campaign that includes final testing of the Soyuz rocket and prepares the vehicle for tanking, to start during an right-hour countdown picking up on Wednesday. Rising from its pad under the loud thunder of its four boosters and core stage, Soyuz will head to the north-east to begin its chase of the Space Station.

The crew will arrive in orbit less than nine minutes after liftoff, beginning a two-day commute to ISS in order to complete testing of the new modified systems aboard the Soyuz MS vehicle. Docking is scheduled for 4:12 UTC on Saturday, restoring the ISS crew to six after a three-week period of three-crew operations by Expedition 48 commander Jeff Williams and Cosmonauts Alexey Ovchinin and Oleg Skripochka.