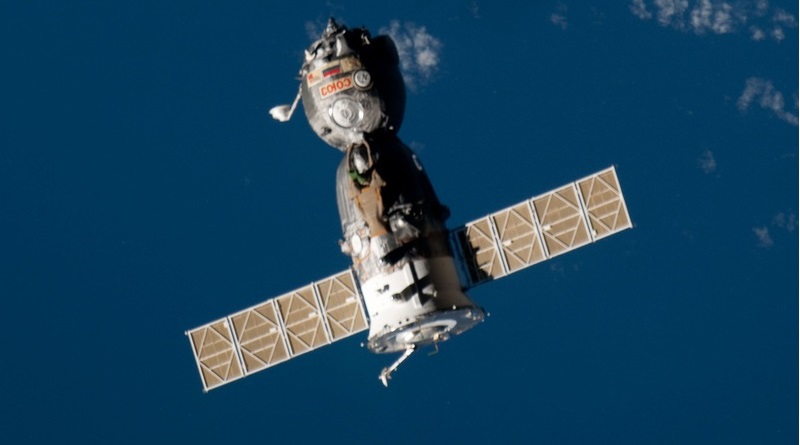 Taking their seats atop a Soyuz FG rocket filled with over 274 metric tons of fuel, Anatoli Ivanishin, Takuya Onishi and Kate Rubins lifted off from the Baikonur Cosmodrome at 1:36 UTC on Thursday, embarking on a two-day commute to their orbital workplace. The trusted Soyuz FG rocket provided a smooth ride to the crew and their Soyuz MS-01 spacecraft, the first in the improved line of MS vehicles to fly.

Racing into orbit in under nine minutes, the force of rocket power quickly transitioned to the sensation of microgravity for the three crew members aboard the spacecraft. Soyuz FG hit its target with excellent accuracy, arriving very close to the predicted orbit.

Heading off on their first lap around the planet, the crew oversaw the deployment of the two power-generating solar arrays – the first upgraded element on the Soyuz MS as the arrays feature more efficient solar cells and are larger in size, around 1.1m² compared to the predecessor version of Soyuz.


Both arrays and the KURS antennas swung into position as planned and pressure measurements cleared the crew to open their helmets as they departed range of Russian ground stations. Pressurization of the propulsion system occurred shortly after orbital insertion and Soyuz primed its DPO thrusters for use – employing a modified arrangement with two separate manifolds, featuring 14 pairs of 130-Newton thrusters installed all across the spacecraft to deliver redundant attitude control capability.

Heading out over the Pacific Ocean, Soyuz was to null residual body rates and enter its nominal LVLH duty attitude for battery charging. About one hour after launch, Soyuz MS was to test out an attitude maneuver to point a new Phased Array Antenna toward the Luch Data Relay Satellite in Geostationary Orbit in a first checkout of the spacecraft’s ability to communicate with Mission Control through the Luch system.

Passing over Russian Ground Stations after their first lap around Earth, the crew worked with Mission Control Moscow to complete a test of the ship’s Main Propulsion System and Anatoli Ivanishin assumed manual control of the vehicle to test the rotational and translational hand controllers as well as the new flight software for the modified engine arrangement.

A pair of SKD main engine burns were completed on Orbit #3, spaced by about half a lap around the planet, each burn firing the 300-Kilogram force engine for close to a minute. After the burns were complete, Soyuz was tracked in a 285 by 293-Kilometer orbit where it was still catching up with the Space Station that is flying in a nearly circular orbit 400 Kilometers in altitude.

A small course correction was on the crew’s timeline on Friday plus more testing activities related to the MS systems upgrade. Heading to back for a final night aboard the tight quarters of Soyuz, the crew will wake up on the 28th orbit of the mission to put in motion the final preparatory steps for their arrival at ISS.

At 1:51 UTC on Saturday, the Soyuz will initiate its Automated Rendezvous Sequence, a fully automated series of operations including the last ground targeted burns, the start of KURS navigation and finally proximity operations close to ISS. Shortly after rendezvous initiation, Soyuz conducts a programmed burn that will place the craft on a path into a 200-Kilometer zone around the Space Station where Soyuz and ISS can begin direct space-to-space communications. With the new MS version, Soyuz and ISS will establish the usual VHF voice link as well as a Proximity Communications Link for the exchange of satellite navigation data, assisting in the far-field rendezvous phase.

Activation of the new KURS-NA navigation systems on Soyuz and the passive KURS-P on ISS occurs at around 2:40 UTC. Initially searching for the signal, Soyuz will lock on KURS and begin calculating range, range rate and the relative geometry between itself and ISS to guide the craft to the vicinity of the Station through a series of Rendezvous Impulse Burns.

The validity of KURS navigation data will be checked twice, when Soyuz is at 80 Kilometers and closer in at 15 Kilometers to make sure the system is feeding good navigation data to the flight computers. Once arriving in the vicinity of ISS, Soyuz switches on its TV system to provide the crew with a look at the Station, making use of a new digital video processing and transmission system to deliver video feeds to ISS and the ground.

Initially flying towards a Ballistic Target Point, Soyuz will begin correcting the intentional target offset by making a series of three thruster burns that will require the craft to move between burn attitude and Line-Of-Sight attitude using its DPO attitude control thrusters which will also be in charge of the final braking maneuvers when Soyuz gets close to ISS.

Reaching a distance of 400 meters to ISS, Soyuz will initiate its flyaround sequence to slowly move around the Station to get aligned with the Rassvet module. After the seven-minute sequence, Soyuz will come to a stop 200 meters from the docking port, entering a short period of Stationkeeping so that the crew and the ground can check the alignment. Once Mission Control provides a go for final approach, Ivanishin will issue the command for Soyuz to pulse its DPO thrusters and initiate a slow closing rate.

With its DPO thrusters, Soyuz will maintain a good alignment as it slowly moves in for docking under the watchful eye of Commander Ivanishin who will be ready to fly manually if needed.

Contact and Capture is currently expected around 4:12 UTC, though the exact timing may vary by a few minutes due to flexibility in the Stationkeeping period.

After docking, Soyuz will retract its docking probe and hooks between the Soyuz and Rassvet will be closed to establish a tight coupling between the two spacecraft. Leak checks will get underway a short time later to verify the interface is air tight before hatches are opened and the new crew members can be welcomed by the resident crew of Expedition 48 commander Jeff Williams and Flight Engineers Aleksey Ovchinin and Oleg Skripochka.