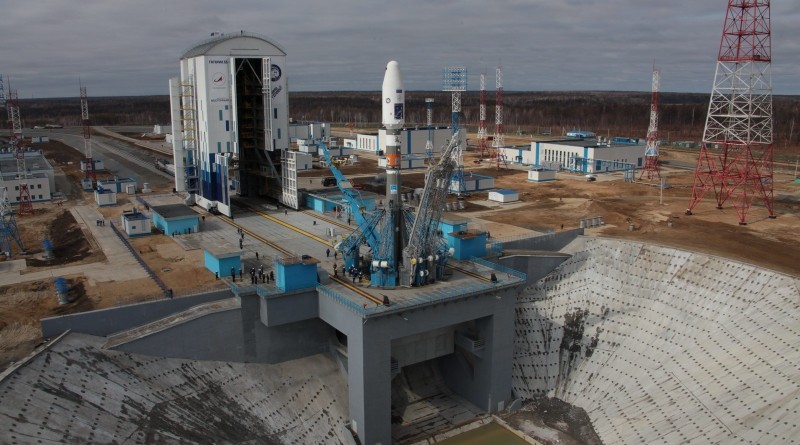 Russia’s new Vostochny Cosmodrome is set to open for business on Wednesday with the inaugural Soyuz mission from the new launch base established in Russia’s far east after five years of construction.

The Soyuz 2-1A rocket carrying the Lomonosov, AIST-2D and SamSat-218/D technology and science satellites is set for liftoff at 2:01 UTC  to complete a standard ascent mission of nine minutes and hand off to the Volga upper stage for a multi-hour flight, lifting the three satellites to different polar orbits.

The first launch from Russia’s new civilian launch site will be broadcast live and new Rocket Cameras have been promised to deliver unique and rare views from the Soyuz rocket as it climbs into orbit.

Vostochny’s grand opening will likely be attended by Russian President Vladimir Putin and Deputy Prime Minister Dmitry Rogozin who has been in charge of Russia’s space forces since 2011 – the same year construction started at the Vostochny Cosmodrome, built on the closed Svobodny launch base. The primary goal of the Vostochny Cosmodrome is to reduce Russia’s dependency on the Baikonur Cosmodrome leased from Kazakhstan, establishing a launch site on Russian territory for the Soyuz and Angara rockets.

While the Soyuz launch pad and support facilities finished construction late in 2015, the Angara complex for heavy-lift missions will not be ready until 2021.

Baikonur will be in use for at least another decade as the shift of missions to Vostochny is foreseen at a gradual pace. Crewed Soyuz launches will continue to use the historic Cosmodrome until the new Federation spacecraft is ready for launch on Angara and the Proton heavy-lift launcher will keep flying from Baikonur until its retirement in the 2020s.

Over the course of construction at Vostochny, efforts were plagued by delays, unpaid wages for workers and alleged cases of corruption. The goal of having the facility ready for a first launch in 2015 had to be abandoned when the final dash of readying the Soyuz launch pad, assembly facilities, propellant support facilities, ground support systems, management buildings, and other support buildings dragged on into late 2015.

The final concrete at the launch pad was poured in November when the first Soyuz to launch from Vostochny was already awaiting its liftoff inside the new processing facility after arriving at the base in September. Assembly of the rocket was completed in January and Soyuz rolled out for a detailed testing campaign in late March to demonstrate the various ground facilities at the launch site.

Unlike the Soyuz pads in Plesetsk and Baikonur, Vostochny’s launch complex features a large moving Service Gantry that can roll over the launch vehicle to provide access platforms and retreat to a safe distance some time before liftoff – similar to the ELS launch site in French Guiana.

Lifting off from new grounds, Wednesday’s Soyuz mission will introduce a number of new systems on the rocket.

Vehicles launching from Vostochny feature some modifications to make them fit for transportation over large distances since the vehicle components need to travel over 6,500 Kilometers by rail from their manufacturing plant in Samara to the eastern Cosmodrome. Also, the launcher features internal modifications to be able to sit atop the launch pad for an extended processing campaign of four days and additional vent valves are used to route gaseous oxygen from the Soyuz to the outside of the Service Gantry.

A new TV system on the Soyuz will be introduced on Wednesday’s mission comprised of four cameras installed on the 46-meter tall rocket and connected to processing electronics to downlink live video from the vehicle as it climbs into orbit. The BSVK system was developed by NPO IT in Moscow and is hoped to become a regular part of Soyuz missions from all Cosmodromes.

The April 2014 launch of Sentinel-1A from French Guiana was the first to deliver external video from a Soyuz using a pathfinder BSVK system, though the video was only available after the mission and not used during the live launch broadcast. Crewed Soyuz missions from Baikonur have employed a live in-cabin feed for decades, but external video was not part of the typical repertoire until the 2014 launch from French Guiana.

Press reports released in the days ahead of Vostochny’s first launch indicated that live onboard views from the Soyuz would be part of the launch broadcast if the signal is stable.

The Soyuz 2-1A is outfitted with a long-range telemetry system known as СКУТ-40, also developed by NPO IT. СКУТ-40 is comprised of a multitude of sensors, electronics boxes and radio systems to collect vehicle data during the operation of the Soyuz to permit the analysis of launch vehicle performance and flight environments in real time and more detailed post-flight reviews.

Based on a modular approach, the system can be outfitted with linear and angular accelerometers, vibration sensors, strain gauges, acoustic sensors and other instrumentation collecting 400 measurements per second to deliver high-speed data on vibration and oscillation environments. Data from the system is downlinked at 1280kbit/s using a VHF/UHF telemetry downlink system with a range of around 2000 Kilometers, guaranteeing data can be received over areas with sparse ground station coverage.

Soyuz was rolled out of its new processing facility on Saturday and placed in its vertical launch position atop the pad with rollout taking place at the traditional early morning hour, a practice that has been in place since Yuri Gagarin’s historic flight 55 years ago. The Mobile Service Gantry was rolled in place to protect the vehicle and provide access to workers to prepare for countdown operations and put the Soyuz through a detailed testing campaign. Countdown operations will get underway eight hours prior to the expected liftoff time with fueling picking up at L-4 hours after final clearance is given by the Russian State Commission.

Soyuz 2-1A is set for liftoff at 02:01 UTC on Wednesday, 11:01 a.m. local time in Russia’s Amur Region and set for a flight to the north west, headed to a Sun Synchronous Orbit. The workhorse launcher will be tasked with a standard ascent mission – lifting off with a thrust of 422 metric-ton force delivered by its four liquid-fueled boosters and core stage.

The boosters will separate from the vehicle at the two-minute mark and Soyuz will head on powered by its Core Stage alone, leading up to payload fairing separation around three and a half minutes after launch. Separation of the stages is set for T+4 minutes and 47 seconds and the Block I third stage will fire its engine for a four-minute burn.

The Volga Upper Stage separates from the rocket just before T+9 minutes to assume control of a multi-hour flight. This marks the first use of the Volga upper stage on a Soyuz 2-1A rocket after the TsSKB Progress-built stage flew on a pair of Soyuz 2-1v missions. Volga is smaller than the Fregat upper stage frequently used on the Soyuz, it holds 900 Kilograms of hypergolic propellants to be expended by a 2.94-Kilonewton main engine over the course of multiple burns to be able to deliver satellites to a variety of orbits. Using star trackers and state-of-the-art control systems, Volga can operate for 24 hours and fly complex mission profiles.

According to documentation, Wednesday’s mission will target a 550-Kilometer Sun Synchronous Orbit inclined 97.6° for the Lomonosov satellite and a 490km SSO for AIST-2D. The flight of the Volga Upper Stage will last several hours and conclude with a targeted deorbit maneuver to set the vehicle up for destructive re-entry over the Pacific Ocean between 8 and 10 UTC on Wednesday.