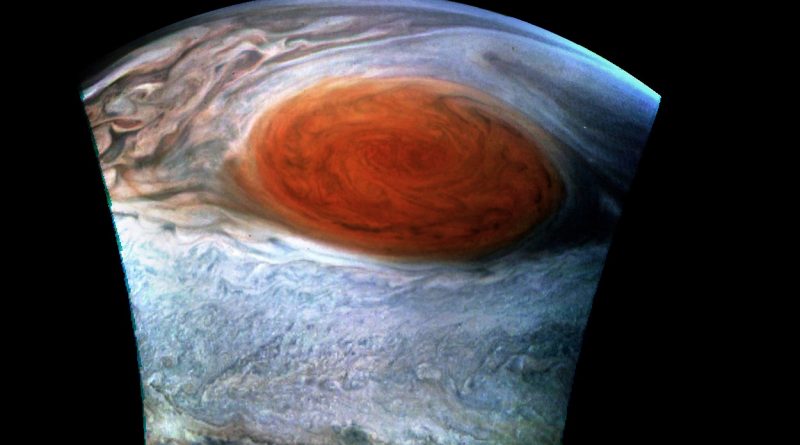 NASA’s faraway Juno spacecraft had its eighth close encounter with Jupiter this week and has since sent back spectacular imagery and a treasure trove of data looking at Jupiter’s most captivating feature – the Great Red Spot, a giant storm system that could swallow the entire Earth and has been in existence for at least 187 years.

Juno’s eighth close pass, the sixth with science data collection, occurred on July 11 just after the craft celebrated its one-year anniversary at Jupiter.

In its first year, Juno chalked up some 115 million Kilometers in its highly elongated orbit around Jupiter, venturing out to distances of eight million Kilometers and coming as close as 3,000 Kilometers to Jupiter’s cloud tops for science encounters every 52.5 days.


The craft’s sixth science pass was set up to take it directly over the Great Red Spot to get up-close and personal with the giant feature, pointing its camera and cloud-penetrating instruments directly at the storm to see how deep the storm system extends into the high pressure regions of Jupiter’s dense atmosphere and help scientists understand what has fueled the storm to go on for close to 200, possibly even 350 years if early observations from the 1600s can be trusted.

Juno’s close passes take the spinning spacecraft from north to south around Jupiter with data collection possible in a narrow window of only a few hours around the Perijove passage; up-close observations are limited to a window of only minutes. Via small engine burns over the course of its elongated orbit, Juno sets up the proper longitude for each science pass, aiming to capture data of the entire planet with only a limited number of close encounters before Jupiter’s intense radiation will bring the mission to an end.

Tuesday’s pass was set up to intercept the Great Red Spot as it rotated directly under the spacecraft’s orbital trek. Flying north-to-south, Juno reached its closest distance at 1:55 UTC on Tuesday when passing only 3,500 Kilometers over Jupiter’s cloud tops. Another 11 minutes and 33 seconds later, Juno had covered 39,800 Kilometers to the south and was directly over the Great Red Spot at a distance of approximately 9,000 Kilometers. All of the spacecraft’s science instruments and the JunoCam imager were active for the high-profile encounter that promised an unprecedented data set.


“For generations people from all over the world and all walks of life have marveled over the Great Red Spot,” said Scott Bolton, principal investigator of Juno from the Southwest Research Institute. “Now we are finally going to see what this storm looks like up close and personal.”

The Great Red Spot has been highly variable in all its properties: it once extended up to 40,000 Kilometers from west to east and 14,000km from south to north but in recent times has appeared to be shrinking with latest measurements of its longitudinal dimension around 16,350 Kilometers.

Its color has greatly varied over time from almost brick-red to a pale salmon color or even taking the same color as the South Equatorial Belt in which it resides. Wind speeds around the edge of the storm can reach 430km/h but currents inside are more or less stagnant with only little in- and outflow.

The mechanical dynamics of the Great Red Spot have remained largely unknown. Measurements have shown its cloud tops are some eight Kilometers higher than surrounding regions and infrared data has shown the Great Red Spot to be a great source of heat as it simultaneously generates gravity and acoustic waves that collide around 800km above the storm and are responsible for the high temperature in Jupiter’s upper atmosphere.

The storm’s longevity has previously been explained by Jupiter’s lack of a solid core, allowing circulating gas masses to persist for a very long time because there is nothing to oppose their angular momentum.

The Great Red spot has been scrutinized with Earth-based instruments for nearly two centuries and space-based assets like the Hubble Space Telescope and flybys of the Voyager Probes and Galileo spacecraft also provided data, but no conclusion has been possible so far on what powers the storm, how deeply it is rooted within Jupiter’s atmosphere and what causes its periodic color changes. It is also not clear whether the recent shrinking of the storm could be a precursor to the disappearance of the Great Red Spot over the coming decades.

NASA said all eight of Juno’s instruments plus the JunoCam imager functioned as designed during this week’s encounter and data is being downlinked as Juno is outbound again. Particular attention will be paid to the Microwave Radiometer instrument that can penetrate Jupiter’s dense clouds and measure the structure and chemical composition up to a depth of over 500 Kilometers, potentially revealing storm features that have been previously unknown.


Juno’s Waves instrument will have been listening for any signs of acoustic waves emanating from the Great Red Spot to help quantify the energetic processes related to the storm and its effect on the upper atmosphere while JIRAM and UVS were poised to collect spectral data and imagery in the ultraviolet and infrared wavelengths, delivering data on potential photochemical processes ongoing in the storm that could explain its color as well as its thermal structure. JADE & JEDI, Juno’s particle instruments, will have been on the lookout for any changes in Jupiter’s charged particle environment that could be caused by the storm while FGM monitored for any magnetic anomalies arising from the spiraling storm.

Last but not least, JunoCam was actively snapping pictures of the Great Red Spot as the sole imaging instrument of the Juno mission. Once a late addition for public outreach, JunoCam has become the first close-up imaging instrument delivering never-before-seen views of the Gas Giant and images of the gigantic storm captured this week did not disappoint.

JunoCam’s images show a tangle of dark, veinous clouds throughout the vast expanse of the Crimson Oval, resolving previously unknown structural details. “For hundreds of years scientists have been observing, wondering and theorizing about Jupiter’s Great Red Spot,” said Scott Bolton. “Now we have the best pictures ever of this iconic storm. It will take us some time to analyze all the data from not only JunoCam, but Juno’s eight science instruments, to shed some new light on the past, present and future of the Great Red Spot.”

JunoCam images in their raw form are posted on the project website for citizen scientists to apply their talents stitching, zooming, contrasting and color-calibrating to bring out the best detail in the tantalizing images – a concept that has worked extremely well for this mission and is likely to find its way into several missions in NASA’s not too distant future.

Juno – on a journey since August 2011 – will make its next close pass of Jupiter on September 1st, continuing in the initial orbit it was captured in after a rocket-powered braking maneuver on July 4th, 2016 instead of spiraling down into a two-week orbit due to concerns with the craft’s propulsion system.

The quality of science data Juno collects is not hampered by the different orbit, however, it will take longer for Juno to accumulate data as passes are far in between. Future passes directly over the Great Red Spot will enable Juno to put its Gravity Science experiment to use in order to map out whether the storm is associated with a mass concentration.