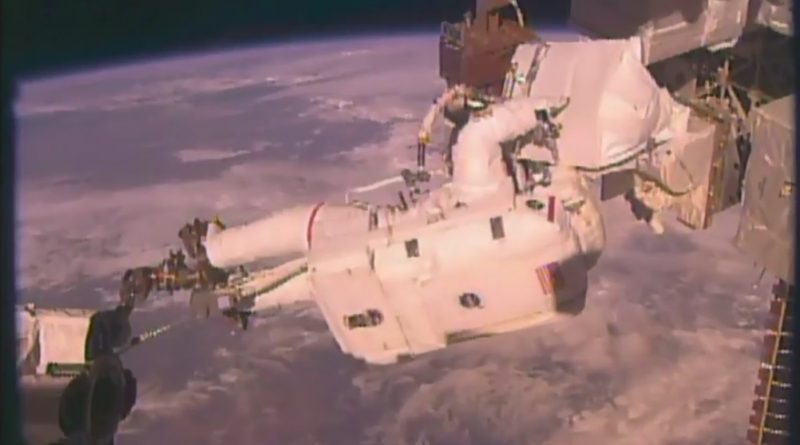 Spacewalkers Jeff Williams and Kate Rubins blazed through their task list in a busy EVA on Thursday, venturing outside the hatches of the International Space Station for over six and a half hours to complete a series of outfitting tasks on the exterior of the orbiting laboratory.

Working on the far outside of the Station’s Truss, the spacewalking duo retracted a thermal radiator to preserve it as a spare for future use if needed. They then installed a pair of new HD cameras that will generate high-resolution still imagery and video for external inspections and Earth observations. Still with time to spare, the crew serviced the Station’s Solar Alpha Rotary Joint, removed no-longer needed covers and reconfigured an equipment cart on the station’s truss.

Thursday’s spacewalk was added to the crew’s schedule after a gap opened up in the Station’s timetable due to the slip of the Cygnus OA-5 launch and the HTV-6 resupply mission. Also, Mission Controllers took advantage of still having experienced spacewalker Jeff Williams on the station to provide a helping hand in keeping ISS in ship shape before returning to Earth next week.


Thursday’s EVA came almost two weeks after the August 19 spacewalk of Williams and Rubins that saw the successful installation of International Docking Adapter 2 on the station’s forward docking port to provide an orbital parking spot to Commercial Crew vehicles scheduled for their first missions next year.

Performing EVAs back-to-back within a few days also allows the Space Suits and airlock to be kept in an EVA configuration, saving over a day of crew time compared to setting up from the start.

Final prep work ahead of Thursday’s EVA started early in the crew’s day when the two spacewalkers, along with Japanese Astronaut Takuya Onishi, sealed themselves off in the airlock at reduced pressure to remove nitrogen from their blood. They donned their Extravehicular Mobility Units and went through a series of checkouts before heading into 100 minutes of pre-breathing pure Oxygen, accompanied by light exercise to accelerate their metabolic rates in order to purge their blood stream.

Depressurization of the Quest Airlock was completed in swift fashion, allowing the EVA to start ahead of schedule with the official start time marked at 11:53 UTC when the two spacewalkers switched their suits to battery power. Jeff Williams, reprising his role as EV-1 wearing a suit marked with red stripes, climbed out first to set up tethers before Kate Rubins egressed as well.

The first task for the crew members was the translation all the way outboard on the Port Truss to get to the first worksite of the EVA at P6 where the Trailing Thermal Control Radiator was waiting to be retracted.

This radiator, also called TTCR (“Ticker”) for short, has had a storied history, being launched with the P6 truss in November 2000 as the second truss segment to head to ISS, following the Z1 truss installed in the center of the Integrated Truss Structure.

In the early configuration of ISS, P6 provided the mounting platform for a pair of Solar Array Wings and the Early External Thermal Control System (EETCS) that was used until the Station’s main radiators could be installed.

After the Station’s truss was assembled, P6 was moved out to cap the Port Truss. Before the relocation, the EECTS radiators and solar arrays were stowed. While the arrays were re-deployed, the two radiators remained folded as they were no longer needed.

Since 2006, the Photovoltaic Thermal Control System (PVTCS), a separate system to EETCS, showed a coolant leak that continued at a low rate until 2012 when the leak rate showed a sudden increase. The suspicion was that the leak or leaks were located on the PVTCS radiator and engineers decided to bypass that radiator and re-deploy the TTCR to use it instead.

This re-deployment was completed in a 2012 EVA by Suni Williams and Aki Hoshide, but the leak accelerated again in 2013 and its location was finally revealed by ammonia flakes escaping from the loop. A contingency EVA to change out a Pump Flow Control Subassembly in 2013 finally stopped the coolant loop from leaking.

However, P6 continued to have two radiators exposed to risk of suffering a debris strike, the TTCR and the PVTCS radiator. Scott Kelly and Kjell Lindgren stepped outside last November and reconfigured ammonia lines to route the coolant through the PVTCS radiator again but ran out of time when attempting to stow the TTCR.

Setting out to complete the TTCR Stowage as a main task, Williams and Rubins had plenty of time to deal with any problems on Thursday.

Using a Pistol Grip Tool, Jeff Williams drove a retraction bolt to fold up the radiator panels in an accordion-like fashion. It took several attempts with different torque settings to achieve a fully seated configuration, enabling the spacewalkers to bolt four cinches into place – a task that also needed a few attempts at getting the radiator fully secured.

As a final task at the work site, the spacewalkers placed a Multilayer Insulation Cover over the radiator to shield it from the thermal environment and protect its from Micrometeoroid and Orbital Debris strikes, thus preserving it as an operational spare for future use if needed at any point in the Station’s remaining life.

The second major task of U.S. EVA-37 was the installation of HD Cameras on the exterior of ISS to finally provide high-definition views from the outside of the complex. The CTVC cameras currently in use on the outside are standard-definition cameras with a 4:3 aspect ratio which had been the current state of technology when the Station was designed in the 1990s.

The External High Definition Camera Assemblies (EHDCAs) have been specifically designed as an add-on, not requiring the existing camera network to be touched to maintain its full functionality. Each EHDCA houses a commercial Nikon D4 DSLR in a pressurized, thermally controlled housing. An electrical motor is responsible for setting the zoom level on a 28-300 lens which will allow for close-up inspections of external components.

The cameras can be operated to deliver 720p video or 16.2-megapixel still images, making them an extremely useful tool for external inspections carried out remotely from the ground as well as Earth imaging without the need for crew time.

To avoid excessive external reconfigurations, the camera units were designed to only tap into the station’s power supply and send imagery wirelessly to the inside of the Station where footage is stored ahead of downlink to the ground.

For the camera installation, Jeff Williams got a ride at the end of the Station’s 18-meter long Canadarm2 controlled by Takuya Onishi from the Cupola Robotics Workstation. With the camera handed off between Rubins and Williams, the stage was set to maneuver him to the nadir-facing side of the P1 truss where Camera Port 9 is located.

At the worksite, the first order of business for Williams was the replacement of a light that failed when its heater power was cut off due to a blown relay within a switching box that has since been changed out.

Williams made quick work removing the old light by releasing a single bolt and putting the new one in place before attaching the EHDCA to the SD Camera already in place on the Camera Port.

In the new arrangement, the SD and HD video cameras share a Camera, Light Pan and Tilt Assembly and always point to the same direction.

While Jeff Williams was riding the arm and taking care of the cameras, Kate Rubins translated outboard to the Port Solar Alpha Rotary Joint that is in charge of rotating the entire outer truss section to keep the Station’s solar arrays sun-pointed. At the SARJ, she was tasked with tightening three struts within the Alpha Joint Interface Structure to eliminate some vibration seen in telemetry data from the area.

Rubins also completed a visual inspection of lubrication within the SARJ to make sure no re-lubrication will be needed in the near future.

Having completed the first camera installation without issue, Jeff Williams was instructed to stay on the arm and install a second HD camera as a get-ahead task. Kate Rubins again had the job of moving back to the airlock to fetch the camera bag and hand it over to Williams for the ride to the CP08 Camera Port on P1 zenith where the new HD camera was put in place.

To finish her primary task list, Rubins translated all the way back out to P6 where she removed protective covers from a failed Pump Flow Control Subassembly. With the covers removed, the Orbital Replacement Unit can be accessed by the Station’s robots for a future removal should the need for that arise.

Cleaning up the robotic arm and removing the foot restraint, Jeff Williams again had a few minutes to spare and went over to the Port CETA Cart (Crew Equipment Translation Aid) where he tied down the brake handles to ensure they stay put when the cart is moved in the future. A final planned get ahead task, taking images of the outboard side of the Alpha Magnetic Spectrometer, was left open to end the EVA within a reasonable time frame.

Williams and Rubins headed back inside and closed the hatch of the Quest airlock to start the repressurization at 18:41 UTC after a very successful spacewalk of six hours and 48 minutes.

U.S. EVA-37 achieved all primary objectives plus a pair of get-ahead tasks including the addition of the second HD camera on the truss of the Station.

New U.S. spaceflight record holder Jeff Williams will now focus on his return to Earth next Tuesday night when he will depart the Space Station with his Soyuz crew mates Aleksey Ovchinin and Oleg Skripochka for a parachute-assisted landing in the Kazakh steppe in the early hours on September 7.