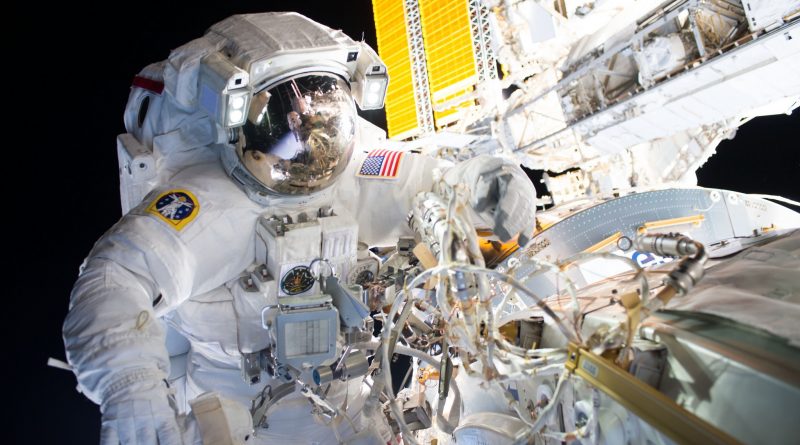 International Space Station Astronauts Jeff Williams and Kate Rubins will venture outside the orbiting complex on Thursday for the second time in under two weeks to complete a series of outfitting tasks on the exterior of the Station.

The August 19 EVA was ended after five hours and 58 minutes out of a planned 6.5-hour spacewalk, foregoing any get-ahead work due to an issue with Jeff Williams’ communications cap that had shown some degradation late in the spacewalk.


Thursday’s EVA will revolve around a pair of main tasks – the retraction of a thermal control radiator out on the Port truss of the Station and the installation of a high-definition video camera to enable surveys of vehicles docked to ISS as well as Earth observations. The rest of the EVA, as time permits, will be filled with a number of smaller maintenance activities on the outside of ISS to ensure all external systems are kept in the best possible condition.

U.S. EVA-37 was added to the crew’s schedule in August when it became clear that the Cygnus OA-5 and HTV-6 cargo missions would have to shift to the right due to launch delays – creating a gap in planned Station operations. Mission Managers took advantage of the gap and the fact that experienced spacewalker Jeff Williams is still on ISS prior to his departure on September 6/7. Also, having the space suits already set up for EVA saves several crew days of work to ready the EMUs and airlock for spacewalk operations, explaining the desire to schedule back-to-back EVAs with only a few days in between.

For Thursday’s EVA, Jeff Williams will reprise his role as the lead spacewalker, or EV-1, wearing the suit with red stripes while Kate Rubins, serving again as EV-2, will use an all-white EMU. The EVA is expected to get underway at 12:05 UTC following several hours of preparations including suit checks, pre-breathe and airlock depressurization ahead of the opening of the Quest Airlock’s hatch and the transfer of the suits to internal power – officially marking the beginning of a U.S. spacewalk.

The first task for the crew will be the retraction of the Trailing Thermal Control Radiator or TTCR out on the P6 truss segment of ISS. The story of reconfigurations of the P6 Photovoltaic Thermal Control System (PVTCS) goes back to 2012 when, in an effort to eliminate a coolant leak, the older TTCR was deployed and the normally used PVTCS radiator was bypassed as the leak was suspected to be somewhere on its surface. However, in 2013, a stark increase of ammonia leakage revealed the breach on a pump module that was eventually changed out.

The TTCR was originally used as part of the Station’s main thermal control system during the early phase while the P6 truss was still sitting atop the Z1 truss on the center of the Station. After its duty was done and P6 moved to the port truss, the two EETCS Radiators (Early External Thermal Control System) were stowed to be available as spares.

With the leak on the P6 PVTCS stopped, teams decided to return the system to its original configuration in a November 2015 EVA during which spacewalkers Scott Kelly and Kjell Lindgren were tasked with re-routing ammonia lines back to the P6 PVTCS radiator and stowing the TTCR to preserve it for future use as a spare. While the ammonia jumper work was successful, some drama emerged during the TTCR retraction.

The TTCR had successfully been retracted by Kelly and Lindgren, but was not cinched down when the Station’s Control Moment Gyros began to saturate because of the moment exerted by an ammonia vent overboard. Desaturation firings of the thrusters had been suppressed at the time since the TTCR was in an unstable configuration.

Just as ISS started drifting from its normal orientation and communications were about to be lost, the TTCR could be re-deployed and thrusters re-enabled to end the EVA in an orderly fashion and postpone the TTCR retraction to a future EVA.

For Thursday’s EVA, Williams will lead the way in the translation all the way outboard to reach P6 with P1 acting as anchor point for the crew’s safety tethers. At the worksite, the crew will first perform an inspection of the TTCR to make sure there is no visible damage and no hardware in the way for the retraction.

The retraction itself is accomplished by driving a retraction bolt around 50 turns to fold up the radiator panels in an accordion-like fashion. While Williams drives the bolt with his Pistol Grip Tool, Rubins will monitor the retraction process to make sure the radiator is folded up cleanly, an activity taking only three minutes if no issues arise.

The next step will be cinching down the radiator to fully secure it in its stowed configuration, using four cinches and two PIP pins that will be put in place in a cross pattern by the spacewalkers. Once the radiator is fully compressed in place, the crew will be able to place a thermal shroud over the TTCR, requiring four hands as the crew members work on the zenith and nadir side of the radiator to make sure the four cover straps are secure and the cover is fitted neatly over the radiator.

Provided there are no problems with the TTCR, the crew will have plenty of time to move on to their next tasks beginning with the installation of a High-Definition Camera. Williams will pick up an Articulating Portable Foot Restraint that he will install on Canadarm2 while Rubins moves back to the airlock and retrieves the camera unit to be installed by Williams.

Williams will work with robotics operator Takuya Onishi to first install the foot restraint and then ingress it to take a ride on the robotic arm for the camera installation task.

The HD Camera Group is to be installed on the Earth-facing side of the P1 truss from where the camera can capture video of docked Soyuz vehicles for remote inspections prior to return and contribute to ISS Earth Observations. Currently, all external cameras on ISS with the notable exception of the UrtheCast and HDEV systems are standard definition cameras with a 4:3 aspect ratio as had been the state of technology when ISS was assembled.

Access to HD imagery from the outside of ISS has been on NASA’s list for some time and the installation of this and more HD cameras is eagerly awaited to provide a capability of performing detailed external surveys remotely from the ground. The P1 HD Camera will share a Camera, Light Pan and Tilt Mechanism with an SD camera that will remain in place.

At the worksite, Williams will first remove and replace a broken light that failed due to a loss of heater power when a Remote Power Control Module tripped open due to a failed relay. This RPCM was successfully replaced by the Station’s Dextre robot last week and good heater power should now be available for the new light.

After the light is in place, Williams will install the camera unit next to the SD camera that is already in operation.

Once the structural connection is in place, Williams will hook the camera up to ISS power and data so that Mission Control can verify electrical connectivity and power-up the new camera.

While Williams completes the camera installation, Kate Rubins will move outboard again on the Port Truss to reach the Solar Alpha Rotary Joint (SARJ) for some regular maintenance. There, she will conduct a visual inspection of the SARJ to verify that grease put in place in a previous EVA is still present and no new lubrication is needed in the near-future. Also, she will tighten three out of four SARJ bolts to stabilize the structure and avoid excessive vibration. Photos of the site will be taken and Rubins will move around the perimeter of the SARJ to check whether all thermal covers are still in place as some had been seen becoming loose over time.

While Williams egresses the arm and removes the foot restraint, Rubins will again move out to P6 where she will remove a thermal cover from failed ammonia pump modules to expose them for future robotic replacement. With the covers in place, the robots can not access the Flight Releasable Attachment Mechanism of these boxes and Mission Controllers want to have these boxes accessible in case a flight opportunity for spares comes up in the near future.

This will conclude the primary tasks for U.S. EVA-37, but depending on the timing, the crew and Mission Control can elect to complete the two get ahead tasks left from EVA-36.

A 20-minute get ahead that is already located in the general area of EVA-37 is the reconfiguration of the Port CETA Cart by tying down brake handles to make sure they remain clear for future cart motion. The second task – taking around 40 minutes – is the collection of engineering photos of the Alpha Magnetic Spectrometer’s outboard side that can not be surveyed by ISS video cameras. This imagery would provide engineers with valuable data for an assessment of a possible AMS servicing EVA to prolong its life into the next decade.

Returning to the airlock, the crew will repeat their suit checks and make a tool inventory before climbing back inside and closing the hatch to set up for repressurization to conclude EVA-37.

U.S. EVA-37 is the 195 spacewalk in support of Station Assembly and Maintenance. It is the fifth for Jeff Williams and the second for Kate Rubins.