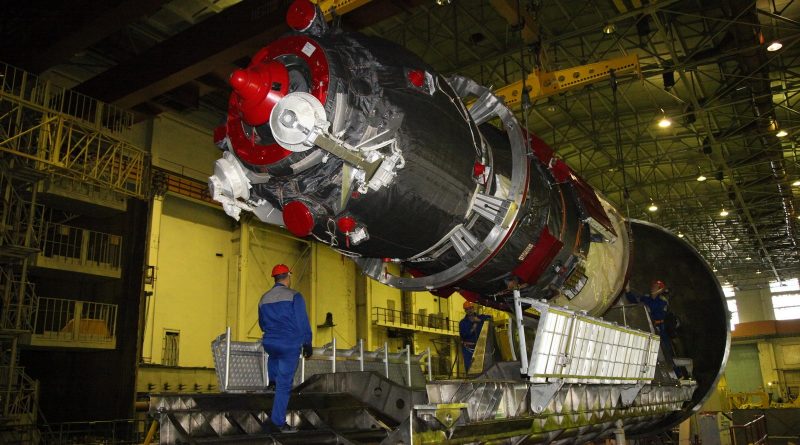 The launch of the Progress MS-1 cargo resupply mission to the International Space Station is slipping one month from November to a new launch target of December 21 due to open work in addressing the Soyuz 2-1A / Progress M-27M launch failure occurring back in April. Progress MS-1 is the first of the next generation of Russian cargo craft in the incremental modification and improvement, keeping the spacecraft series up to date.

Progress M-27M thundered off from the Baikonur Cosmodrome on April 28, becoming the second Progress craft to launch atop the Soyuz 2-1A rocket that is taking over from the old Soyuz U, being phased out in 2016/17. Soyuz 2-1A encountered no trouble in its first Progress launch, Progress M-25M in October 2014, and the initial stages of the launch of Progress M-27M showed no signs of any problems either.

Trouble emerged in the last milliseconds of the third stage burn and the spacecraft separation sequence. In a fast failure mechanism caused by a botched separation of Progress, damage was caused to both, the third stage that lost structural integrity of its propellant tanks and the Progress that suffered extensive damage from which it could not recover. Without a functioning propulsion system and only spotty communications with the ground, Progress M-27M eventually ran out of power and re-entered the atmosphere ten days after launch.


Going through a detailed investigation of the failure, Roscosmos announced that the root cause of the mishap lies within a design flaw in the spacecraft separation system and associated frequency-dynamic characteristics. According to the State Commission, these properties were not fully studied as part of the design work that went into the accommodation of Soyuz and Progress spacecraft atop the Soyuz 2-1A rocket.

Studies of these particular behaviors of the coupling between rocket and spacecraft were conducted in the wake of the failure, and work is still underway to ensure the appropriate measures are implemented to ensure the next Progress will make it to orbit in one piece. To provide additional time for reviews and possible hardware modifications, the launch of Progress MS is being pushed four weeks from November 21 to December 21. Given this is the first flight of a new type of spacecraft, the two-day rendezvous profile will be used to enable Progress MS to arrive at ISS just prior to the holidays.

The same is true with the Progress M-M to MS upgrade since Soyuz will soon (March 2016) make its transition from the TMA-M to the MS version.

Major changes introduced by the MS upgrade of Progress include the replacement of the Ukrainian-built Kvant-V radio communications system with a Unified Command Telemetry System, ending Russia’s reliance on the Ukraine for the production of antennas, feeders and communication electronics. Furthermore, the new telemetry and command system of Progress MS is capable of using the Luch Geostationary Communications Satellites to relay telemetry to the ground and receive relayed commands during the portion of its orbit not in range of Russian ground stations.

Another communications upgrade of the MS series is the implementation of a Proximity Communications Link established with the Space Station during rendezvous to enable relative navigation as an additional source of navigation data. Progress MS is outfitted with GPS and Glonass receivers for accurate time determination, state vector calculation and orbit determination – allowing a more accurate targeting of burns, even by the spacecraft itself, no longer relying on radar tracking that is only possible during ground station passes.

The improvements made to the flight control system, onboard software and communications systems will also permit the switch from analog to digital video transmission for improved video quality during proximity operations. The KURS Navigation System makes a significant improvement in the newest generation of Russian Progress and Soyuz spacecraft, stepping away from the KURS-A system and implementing a new digital KURS-NA system.

The KURS System of the Progress and Soyuz Spacecraft is a radio-based system that allows the vehicles to perform a fully automated Rendezvous, Final Approach and Docking Sequence. KURS uses signals sent from the target vehicle that can be received by several antennas on the chaser vehicle to determine its line-of-sight and pitch angles for the far-rendezvous beginning at 200 Kilometers and pitch, heading and line of sight angles as well as range and range rate during the close rendezvous.

The KURS-NA eliminates any Ukrainian-built components from the system and provides an overall weight reduction while increasing the capabilities of the system. KURS-NA needs fewer antennas and will deliver more accurate measurements to bring Progress and Soyuz craft to a fully automated docking with the Space Station.