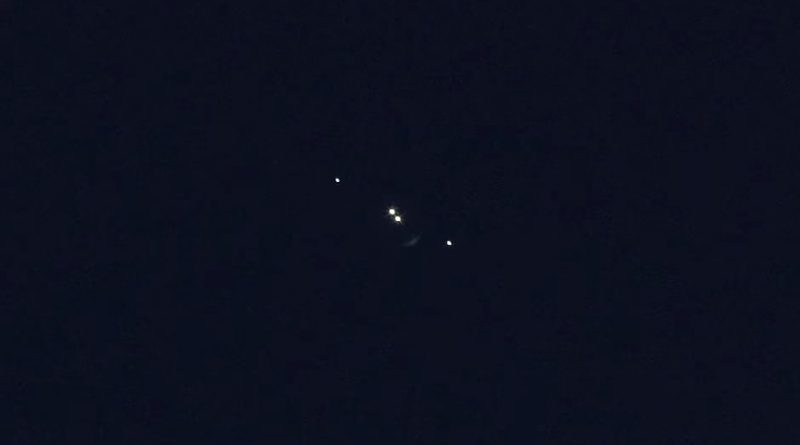 Observers in Western and Central Europe were treated to a unique sight passing overhead Saturday night when the freshly launched SpaceX Dragon along with its second stage and two protective covers streaked across the sky just minutes after lifting off from Florida’s Space Coast.

Reports and videos of the event were posted on Social Media and some witnesses called to authorities after seeing the unusual phenomenon in the sky.

Several factors have to align to create the spectacular display of the four brightly-lit objects in the night sky, notably the observer on the ground must already be on the night side of the planet while the sun is still high enough to illuminate the objects in orbit. This is only the case for precious few Dragon mission launching while Europe also has ISS visibility in the evening or morning hours. Previously, Dragon missions SpX-3 in 2014 and SpX-6 in 2015 put on similar shows but Saturday’s display was particularly powerful due to virtually ideal lighting conditions.


The 65-meter tall Falcon 9 rocket lifted off from Kennedy Space Center’s Launch Complex 39A at 21:07 UTC on Saturday, marking the facility’s 100th launch after supporting NASA’s Saturn V moon rocket and the Space Shuttle before being turned over to SpaceX for commercial services. Dragon – heading into space for the second time as the first re-use mission of the SpaceX cargo vehicle – received a very smooth ride into orbit via a 2.5-minute burn of the first stage followed by close to seven minutes on the MVac-powered second stage.

Dragon was still blazing toward orbit when the rocket’s first stage made a triumphant return to Cape Canaveral, announcing its arrival with two thundering sonic booms and firing up for a powered landing at SpaceX’s Landing Zone-1. Marking the fifth land-based landing, booster #1035 set a new record time for the round-trip to the edge of space, landing seven minutes and 41 seconds after liftoff.

While the first stage was already resting on its four fold-out landing legs, Stage 2 was still firing to send Dragon into the orbital plane of the Space Station, shutting down around nine minutes and 19 seconds after liftoff when reaching an orbit of 204 by 354 Kilometers, 51.64° according to tracking data released in the overnight hours.


The Dragon spacecraft separated from its booster one minute after propulsive flight ended and stabilized its orientation using Draco thrusters followed by the jettisoning of two covers that protected the craft’s solar arrays during launch, clearing the way for their deployment moments later.

Just 20 minutes after the day’s liftoff, Dragon, the Falcon 9 second stage and the two covers that were sent away in opposite directions entered visibility range for the United Kingdom. Many observers reported crystal clear skies and were able to see the four objects passing overhead with the naked eye; observers in Central Europe only had a low-elevation pass and, for the most part, could not see anything at all due to cloud cover.

Here's #Dragon + F9 upper stage passing over here earlier. The objects either side, that change in brightness, are the solar panel covers. pic.twitter.com/QIVG7oLJGw

Video of the event clearly shows two bright objects in the center of the pattern, representing the Dragon spacecraft and Falcon 9 second stage. The solar array covers appear less bright due to their small size and show a considerable variation in brightness as they had entered a tumbling motion by that point. Also clearly visible are small puffs of thruster exhaust either from the Dragon as it stabilized in orbit or the second stage which had begun preparing for its deorbit maneuver shortly after spacecraft separation.

After passing over Europe, Dragon went into a multi-hour checkout campaign controlled from SpaceX Mission Control in Hawthorne, California and the second stage continued executing its pre-programmed flight sequence, firing up its engine very briefly for a retrograde braking-maneuver. SpaceX officials confirmed the second stage completed its deorbit maneuver with no issues and re-entered over the planned area identified in safety warnings, covering a large stretch of the Pacific Ocean between New Zealand and South America.

Dragon executed its first major orbit-raising maneuver on Sunday, climbing up toward the Space Station’s current 402 by 408-Kilometer orbit, chasing the complex from behind and below while the Cygnus OA-7 spacecraft that departed ISS at 13:10 UTC Sunday initially headed out in front of ISS before being overtaken by the complex as Cygnus entered a higher orbit.

Aiming for a 14 UTC capture on Monday, Dragon will maneuver to a point directly below ISS for a straight-up approach to reach the Station’s immediate vicinity.

Dragon SpX-11 is delivering 2,708 Kilograms of cargo to the International Space Station including three high-profile external payloads to probe the interior of the densest stars in the universe, test out solar array technology to satisfy the demand of future power-hungry satellites and deliver a new Earth-science platform to ISS to host up to four remote-sensing instruments. Hitching a ride aboard the Dragon is a group of 40 mice participating in a potential groundbreaking demonstration of a drug promising to reverse bone loss incurred by astronauts during prolonged space travel and Earth-bound patients with Osteoporosis.